Watch The Lady, by Elizabeth Fremantle: reviewed by Sue Purkiss


So what is it that makes the Tudor period so endlessly fascinating to writers? Well... passion, treachery, adventure, a turbulent political climate, beautiful (albeit probably uncomfortable) clothes, larger-than-life characters, royalty, Shakespeare... Hm. Yes, it does seem to have one or two
things going for it - and Elizabeth Fremantle's new book taps into most of them. 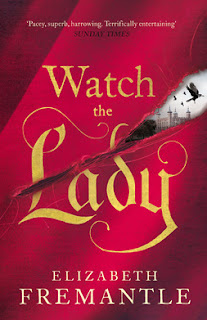 But above all, it has two fascinating characters at its heart - as well as a number of others on the periphery. The 'lady' of the title is Lady Penelope Devereux, the sister of one of Elizabeth's favourites - the Earl of Essex - and the stepdaughter of another, the Earl of Leicester. The title comes from a piece of advice given by Lord Burghley, Elizabeth's trusted adviser, to his son, Robert Cecil, who is the other viewpoint character in the book. Burghley and Cecil are both aware that Penelope is not only beautiful; she is also highly intelligent, politically astute, and the driving force of her flamboyant family. Burghley sees her ability and advises his son to watch her. Cecil sees her ability too, but he's also very aware of her beauty. There's poignancy here, because Cecil is crooked, not beautiful at all. The first time he sees her, she smiles at him - a smile that 'would light up the shadows of hell'. Usually, girls look at him with 'disgust'. As a result, though he will always be an enemy of her brother, his feelings for her are ambivalent - and in the end, this helps her to survive in the dangerous world of Tudor politics.

Penelope is a passionate character. When she is very young, she falls in love with Sir Philip Sidney, the perfect knight: brave, loyal, chivalrous, learned. He falls for her too, but her marriage is a matter of political and economic expedience; she is obliged by her family to wed Lord Richard Rich - they need his wealth, and he needs their ancient lineage. The marriage is not a success, but Penelope is a pragmatist and she makes the best of it - and finds that she is able to turn the situation to her advantage: she takes charge.

Her brother, handsome, charming, ambitious, becomes to the Queen the son she has never had. But along with all his good qualities, Essex is also headstrong and erratic; he suffers from mood swings which leave him sometimes plunged into despair and sometimes dangerously out of control. Penelope is the rock of her family; her mother, who lost the Queen's favour when she married Leicester, is foolish, and her sister wants a quiet life, away from the temptations and dangers of court. It is up to Penelope to improve the fortunes of the Devereux clan - but she also wants personal fulfillment; she wants love.

Elizabeth Fremantle weaves a richly coloured tale of Elizabeth's court. Naturally, as a novelist she My mistress' eyes are nothing like the sun... She reveals the complex machinations and manouevring for place and power, and she shows how Tudor realpolitik is merciless in its sacrifice of the innocent - I could hardly bear to read about the fate of a certain character, whose name I won't reveal. It's always interesting to see how novelists deal with characters who have become well-known to us through other novels and history books; Penelope Devereux is not widely known, but many of the others are very familiar. Elizabeth herself  emerges, at this later stage of her life, as an unlikeable but also rather pitiable figure: Cecil evokes pity and revulsion in roughly equal measure.
takes leave to use poetic license - in Richard Rich's proclivities, for example, but also in a delightful scene where she imagines how Shakespeare might have come to compose his famous sonnet:

But at the heart of the novel is the character of Penelope - warm, clever, courageous and loyal. It's a delight to keep her company as she plunges into the intrigues of Elizabeth's court, and yet somehow manages to retain her integrity throughout. She's a charismatic addition to the canon of powerful women of the Tudor era.