‘We have to devise a means of making known the facts
in such a way as to touch the imagination of the world.’
Eglantyne Jebb


Earlier this month I was fascinated to see a new one-woman play called simply, Eglantyne, written, produced and acted by the New Zealand artist Anne Chamberlain. Eglantyne Jebb, around whose life the play is built, was the remarkable founder of the independent children’s development agency Save the Children, and author of the pioneering statement that has since evolved into the UN Convention on the Rights of the Child, the most universally accepted human rights instrument in history. She was also the subject of my first biography: The Woman Who Saved the Children, and it is wonderful to see that her life is still inspiring people, both to write, and to support the vital work of Save the Children today. Proceeds from both my book and Anne’s play are donated to the charity. You can read my History Girls blog on Eglantyne’s life and achievements here. 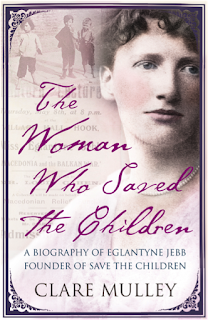 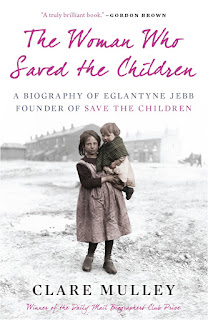 Among Eglantyne’s many skills was an extraordinary ability to communicate the facts in such a way as to inspire others. She had a very vivid imagination and clearly loved words, writing numerous poems and romantic-social novels, as well as her pioneering statement of children’s rights. She also wrote and gave speeches, published leaflets and press articles, and made pioneering use of photographs and film footage to win support for her cause, often from initially hostile audiences.

Anne’s play opens with Eglantyne’s very public arrest in Trafalgar Square in the spring of 1919, for distributing leaflets calling for an end to the economic blockade that was contributing to the starvation of thousands in Germany and Austria. These leaflets had not been cleared under the Defence of the Realm Act – it had never struck Eglantyne that they might need to be. The crown prosecutor did not mince his words, but Eglantyne chose to represent herself and focused on the moral case. By the end of the session she had been found guilty, but the court reporters had plenty to pad out their stories with, and the crown prosecutor insisted on paying her fine.


Save the Children was swept into existence on the wave of publicity that followed this trial, culminating with an exciting public meeting at the Royal Albert Hall. After listening to Eglantyne and her sister’s speeches, the crowds, who had arrived armed with rotten fruit to throw at the traitor women who wanted to give succour to the enemy, were instead inspired to put their hands in their pockets and fund a herd of Swiss dairy cows to provide milk for the children of Vienna.

Eglantyne gained the support of factory girls and aristocrats, the Pope and the Mining Unions, the British aristocracy and the Bolshevik government. She even won the backing of the wife of the Prime Minister whose policies she had campaigned against. ‘When she spoke’, her friend and colleague Dr Hector Munro later wrote, ‘everything seemed to lose importance and one agreed to do whatever she wished.’

Little surprise then, that Eglantyne’s words are still inspiring people today. In her play, Anne manages to integrate many wonderful examples of Eglantyne’s own phrases, from speeches and letters, into her script:

- ‘Humanity owes to the child the best it has to give.’

- ‘Every generation… offers mankind anew the possibility of rebuilding his ruin of a world.’

- ‘The world is not ungenerous, but unimaginative, and very busy.’


As I often still give talks about Eglantyne, and use many of the same quotes, it was strange to hear these words in someone else's mouth, with different intonations. But it was also really lightening - and heartening. At the end of the evening I felt as though, in a way, I had been kindly exorcised of Eglantyne. She will always be an inspiration, but my relationship with her feels less intense – it feels shared.

Before I saw Anne’s play, I had wondered whether I would see a very different Eglantyne on stage, to the one I had come to picture to myself, someone I might not recognise even. This happened once before when I went to a production of Tony Harrison’s play in verse, called Fram. Fram, which means ‘Forward’ in Norwegian, was the name of the arctic explorer Fridtjof Nansen’s ship. As the UN’s High Commissioner for Refugees, Nansen became an associate of Eglantyne’s, helping to bring desperately needed relief to Russia during the famine of 1921. She greatly admired his spirit and energy, calling him a ‘solid viking’. Harrison’s play explored the relationship between art and aid, at times in quite provocative and painful ways. Eglantyne’s lines are the best in it, I think, and she was excellently played by Carolyn Pickles when I saw the production at the Royal National Theatre. But although Carolyn made me laugh by signing my programme ‘Eglantyne’, I did not feel a strong connection with the figure she had portrayed on stage. Perhaps, I thought for a while, I had imagined her wrongly...


As we slowly approach Save the Children’s centenary in 2019, the charity has asked whether it might be possible to re-imagine Eglantyne, to bring her story to a new and younger audience – with a picture book about her life, adventures and achievements. I think this would be wonderful, and look forward to seeing yet another interpretation of this wonderful woman on the page… If anyone has suggestions for brilliant and inspiring children’s illustrators I would be delighted to hear them!

Sadly there is no one alive today who knew Eglantyne. There are photographs and sketches, but no one who heard her voice, and no recording of her. However, much of her writing survives, her actions speak volumes, and her energy, spirit, determination and often rather dark sense of humour, are palpable throughout. When I watched Anne Chamberlain’s play earlier this month, I was delighted to discover that I felt very familiar with the Eglantyne that she brought to life, which makes me hope that perhaps we both found something of the truth in this remarkable woman.


I think that Eglantyne herself would have been fascinated by each reincarnation, and on the whole pleased, given that each helps to promote the cause – the welfare and rights of the world’s children – that she cared so passionately about. ‘A friend of mine once said to me that our minds, contemplating the truth, were like so many cameras turned towards the same building’, she once wrote. ‘No two cameras can be in the exactly the same position… so that no two precisely similar photographs can be taken; hence also, though some may be better than others, no single photograph, always supposing that it had not been faked, will be without its value.’

Sadly Anne’s play has now finished its British run, but it may be back next year and if so I will pass on the tour dates. I hope that between Eglantyne the play, my biography, and any new portrait, many more people, of all ages, may yet come to picture Eglantyne Jebb in their own way, and be inspired.

Fascinating blog, Clare. All power to Anne for setting up her own one-woman show. I am always in awe of fellow actresses when they create work for themselves. In this case, such a worthwhile subject too.

What an admirable woman! I do like Eglantyne's smile in the first photograph, which hints at her lively and compelling personality.

‘The world is not ungenerous, but unimaginative, and very busy.’ What wise, observant words.

It's disconcerting when you have a very strong idea of someone, painstakingly built up, when someone else's vision of that person - inevitably - doesn't quite coincide, but always interesting to see the overlaps and differences. Like Carol, I'm full of admiration for these one-person biographical shows. This reminds me of one I saw a few years ago about Paul Robeson. Love the idea of an Eglantyne picture book - keep us posted.

Isn't Paul Robeson the subject of Steve McxQueen's next film? Funnily enough I think he knew Eglantyne, and visited once - carrying a gun for his protection. I must check.

thank you for the information you present here,
Keep posting and I really like it.. it is very good
visit Obat Herbal Darah Tinggi

I am not good at making information or a very good article, but this article makes me become motivated to make work better.
So, thank you for sharing.. I liked it, because it is very nice
visit Khasiat Obat Ace Maxs

Article and information very good. Nice, interesting and useful
thank you for sharing.. I liked it, because it is very nice
visit Toko Obat Ace Maxs

I think this is a very good article, you have a lot of inspiration untum write an article or information here in.
Thank you very much admin has shared with us,
keep posting more articles
visit Obat Herbal Infeksi Saluran Kencing

Still listening article you serve to make me be inspired in makes work creating articles or information that could be useful,, interesting and easily understood.
Thank you very much for sharing and I wait for your next post.
survivors welcome the new year
visit Obat Herbal Gagal Ginjal Tanpa Cuci Darah

articles you post a very nice, attractive design, the content of the article is simple, good and quality.
Thank you for sharing and allow us a moment to stop by on your site. continued success
visit | Waspadai 5 Komplikasi Diabetes Melitus