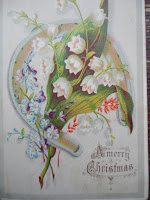 Over the years I have collected interesting cards from old scrapbooks and jumble sales.
As now is the time for sending out Christmas cards, I shall share some with The History Girls.

Approaching Christmas 1938, a British man called W.J. Bassett-Lowke sent out a card with a political, rather than religious, message which seems especially relevant now. Only weeks after British Prime Minister Neville Chamberlain returned from Munich in a British Airways aeroplane, his announcement of ‘Peace for our time’ was already being misquoted as ‘Peace in Our Time’ from the Anglican Book of Common Prayer. ‘The desire of our two peoples never to go to war with one another again,’ said the Anglo-German Declaration signed on 30 September 1938 by Chamberlain and Adolf Hitler. 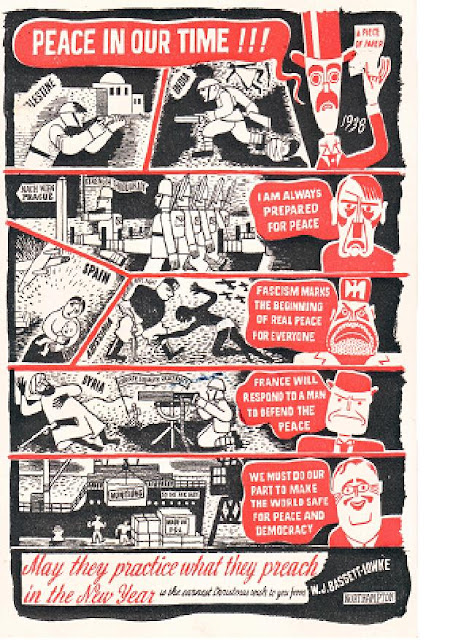 While most of Britain was celebrating this victory of peace over war, Mr Bassett-Lowke was less convinced. His cartoon Christmas card makes the point that Britain was already involved in fighting, in both Palestine and India. Below Chamberlain is a scowling portrait of Hitler, about to invade Czechoslovakia, saying ‘I am always prepared for peace.’ Then beside an air raid over Spain and an Italian soldier attacking an Abyssinian, Mussolini says ‘Fascism marks the beginning of real peace for everyone.’ Next in line is the grimacing French Prime Minister Édouard Daladier saying, ‘ France will respond to a man to defend the peace’. Having failed to ratify the 1936 Franco-Syrian Treaty of Independence, a French soldier is depicted firing a machine gun at a Syrian, while another French soldier marches with a flag announcing ‘Liberty, Equality, Fraternity.’ And finally a jolly US President Franklin D. Roosevelt exporting munitions ‘To the Far East’ saying, ‘We must do our part to make the world safe for peace and democracy.’    Plus ça change, plus c'est la même chose…
“ ‘May they practice [sic] what they preach in the New Year’ is the earnest Christmas wish from W.J. Basett-Lowke Northampton”. So who was he?
Wenman Joseph Basett-Lowke (1877-1953) may have misspelt ‘Practice’ but then he did leave school at 13. Bassett-Lowke’s grandfather and father were engineers and boiler-makers and he used their skills and equipment to produce high-quality model trains.

With advertisements in The Model Engineer and mail-order catalogues, the company expanded, with strong links to Germany. His ‘Gauge 0’ train sets, models of ships and engineering equipment were perfect replicas. Among the model figures of passengers waiting for trains were Charlie Chaplin and Bassett-Lowke’s friend George Bernard Shaw. He depicted himself as ‘A Model Manufacturer’, with briefcase in hand, striding purposefully down the platform. The company also made ride-on garden railways and even a solid silver dining-table train set for an Indian Maharajah.
Bassett-Lowke was an ardent supporter of Modern Design and in 1916 he commissioned Charles Rennie Mackintosh to redesign the interior of his terrace house in Northampton, using the latest plastics to decorate the furniture. Ten years later, he commissioned the German architect Peter Behrens to build a house in Northampton. ‘New Ways’ was possibly the first modernist home, in white concrete with a flat roof, reminiscent of an industrial factory. Basett-Lowke was a Fabian socialist and supported the German-Jewish Bing family, also model train makers, when they fled to Britain in 1933. He was proud of Northampton and founded the Northampton Repertory Theatre, was a Town Councillor and an alderman. His Mackintosh home, 78 Derngate, Northampton, is open to the public as a gallery. In 2013 a steel sculpture to commemorate Bassett-Lowke, Charles Rennie Mackintosh and the poet John Clare were placed by the River Nene in Northampton.
I don’t know who drew his Christmas card but Bassett-Lowke employed the best draftsmen for his mail-order catalogues and in the 1940s wrote illustrated Puffin books on Locomotives and Marvellous Models. 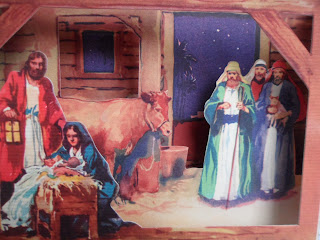 Back to Christmas cards.

Here is a more traditional three-dimensional Nativity scene from the late 1940s.

Happy Christmas to all The History Girls and our readers. May 2016 bring us all world peace… 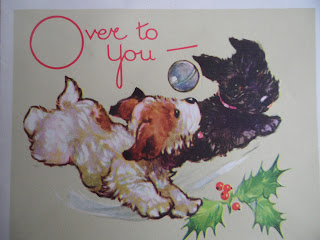 What a great post! - And what a great card. I think we should all print it off and send it this year.

Wonderful post, fascinating subject. And I wouldn't mind owning one of those model trains myself, complete with celebrity passengers!