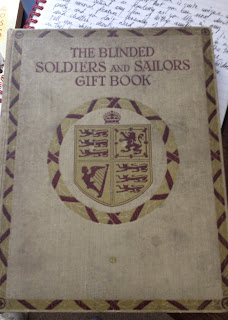 Most writers of fiction, historical or otherwise, like to set themselves challenges - whether it’s delving into the near or distant past, researching aspects of a skill outside their usual frame of reference (loading a nineteenth century rifle; flying an early twentieth century aeroplane), or mastering the nuances of behaviour and speech of an unfamiliar world. I’ve done my share of all of these. But I can honestly say that nothing has presented me with so many difficulties and potential pitfalls as writing from the point of view of a blind man - which I’ve had to do for my last two books (Line of Sight, and Game of Chance), and the one I’m currently working on (Time of Flight). I hasten to add that it wasn’t mere perversity which made me choose a blinded veteran of the First World War as the hero of my series of 1920s detective stories.

My character, Frederick Rowlands, was inspired by my grandfather, Charles Thompson, who was blinded at Ypres in 1917 at the age of twenty-seven, and later trained as a telephonist at St Dunstan’s, the institute for the war-blinded, which celebrates its centenary this year. I always knew I wanted to write about Charles, and this gave me my opportunity. It also meant I had to do quite a bit of research - not only into the history of the late 1920s and early 1930s, but also into the day-to-day realities of coping with blindness. 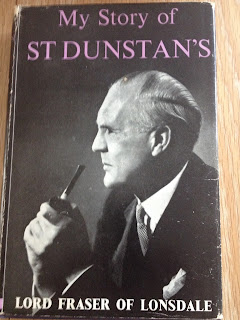 I was fortunate in having access to some very good books on the subject - many of which were lent to me by Bill Weisblatt, the father of a friend of mine, and a former Treasurer of St Dunstan’s. Over the forty-odd years he spent in the job, Bill had amassed a fine collection of memoirs by distinguished St Dunstaners, as well as more general books on the history of this remarkable organisation. Of these, the one to which I had the most frequent recourse (and of which I myself have a copy), is Ian Fraser’s wonderful account of his time at St Dunstan’s, which he joined in 1916 as a newly blinded young man of eighteen, before taking over as the organisation’s head at the age of twenty-four, following the untimely death of its founder, Sir Arthur Pearson. Here is Fraser (or Lord Fraser of Lonsdale, to give him his full title) on his first impressions of St Dunstan’s:

‘I could hear that the hall inside was large, and there seemed to be a lot of people moving very quickly and surely about… The whole hall was carpeted, but paths of linoleum ran through the carpets to help us to walk about… Blind men who were familiar with the place moved with some speed and great certainty. Some whistled or sang out to announce their approach, others just brushed past.’

Here he points up the importance of hearing to the blind:

‘I learnt to make use of all sorts of sounds that I had not bothered to hear before. The difference in echo when going from a room into a corridor, or into another room; the ticking of a clock (usually indicating the mantelpiece); the crackling a fire in winter, or the sounds of birds though an open window in summer - these are some of the sounds that only a blind man needs to hear to form a picture of his surroundings.’

Adding wryly that, contrary to popular supposition, ‘A blind man’s ears do not become sharper - there is no increase in the acuity of his reception of sound-waves. But if the sense of hearing is considered to include the interpretation of sounds, it is certainly improved by the loss of sight…’

Because Fraser was himself having to come to terms with blindness - having to re-learn, not only basic skills such as getting dressed, and shaving himself (‘I have tried various kinds of razor, including safety and electric, but I still use a cut-throat today’), but also having to acquire more specialised skills such as reading Braille - his account has a powerful immediacy. With its wry humour, complete absence of self-pity, and the sheer quality of its writing, this book (My Story of St Dunstan’s, 1961) and its predecessor (Whereas I was Blind, 1942) became an essential source for my story of a war veteran struggling to adjust to life in a sighted world. 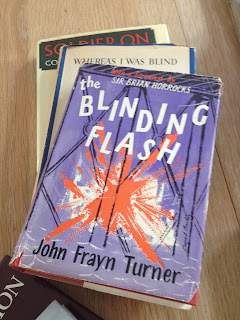 Other books in Bill’s collection - which also includes some fine memoirs by veterans of the Second World War - are several about the history of St Dunstan’s. These describe the setting up of the organisation by Arthur Pearson, newspaper proprietor and publishing magnate, who was himself blind from glaucoma. In 1915, after visiting a blinded Belgian soldier in a London military hospital, Pearson resolved to establish a hostel for the rehabilitation of ex-servicemen who had lost their sight in battle. The first premises were a house in Bayswater Hill, which became the Hostel for Blinded Soldiers and Sailors; later, as numbers grew, the hostel moved to a larger property, in Regent’s Park, lent for the purpose by the American financier, Otto Kahn. In this elegant Regency mansion, surrounded by fifteen acres of grounds, men blinded and traumatised by shell fire were given the chance to recover, and to learn the skills which would enable them to face life in the outside world again.

Since most of them were young and fit, their rehabilitation included a lot of sport - rowing, cycling, walking, running (with a sighted guide), football (as played in the 2012 Paralympics - using a ball with a bell inside it), and tug-of-war. My grandfather was a keen rower, winning several medals and cups - which I still have - for this most energetic of sports. Here he is (centre of back row), with the St Dunstan’s team in 1918, proudly displaying their ‘haul’ of silver trophies. Unfortunately, neither of the smiling V.A.D.s in the photograph is my grandmother, Sheila, but the couple did meet at St Dunstan’s - my grandmother acting as ‘cox’, as Charles rowed her around the lake in Regent’s Park. 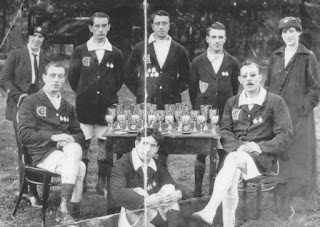 Here is Fraser again, on the joys of rowing:

‘It demanded physical effort, and there was an exhilaration in feeling the boat glide forward, responsive to the power behind the stroke. There were the distinctive and evocative sounds - the soft splash of the oar dipping into the water, the creaking of the rowlocks, the gentle flurry of feathering - and these, with the smell of the lake and the surrounding park, created a vivid mental picture of the scene…’

Yes, I’ve been lucky to have such a range of wonderful source material - and such inspiring role models as these for my ‘Blind Detective’.

This sounds wonderful - the research as well as the story. Thank you!

Thank you, Clare! Glad you enjoyed it.