Literary-historical dogs I have known, by Y S Lee

As the child of Southeast Asian immigrants, I grew up feeling somewhat appalled by the idea of sharing a house with a dog. Yes, our family had dogs when we lived in Singapore, but the dogs' place was in the garden, where they had plenty of shade and water and space to run around. They didn’t come inside the house, much less curl up on sofas or beds. As far as my parents were concerned, dogs were outdoor pets.

I’ve been thinking about this recently because several months ago my children, aged 7 and 4, mounted a vigorous and sustained campaign for a dog. And I’m about to concede defeat. I’ve accepted that our dog that will live in our house and shed on our furniture and need lots of training and exercise and brushing and bathing and veterinary visits and dear god, possibly also tooth-brushing and ear-cleaning and nail-clipping? (Maybe I’ll tackle the history of pet care in a different post.) My point is simply that all this domestic dog chat has me thinking about dogs in literary history.

The first literary–historical dogs I remember noticing was the litter of puppies in Wuthering Heights. They’re never named or numbered, of course; they’re mere props for the vivid illustration of Hareton Earnshaw’s character. As Hareton hangs the puppies (one by one? In a batch? It’s never clearly described) "from a chair-back in the doorway", we readers realize the extent to which Hareton’s own moral growth and intellectual development were strangled from birth.

What’s most striking to me (as a contemporary reader) about this scene is that Hareton’s sadism towards animals does not expel him from the moral world of the novel. Emily Brontë herself disciplined her beloved dog, Keeper, with physical violence. In 1848, it was a fact of life that puppies (and kittens) were often too numerous and must sometimes be killed at birth. (This practice is relatively recent: my father-in-law had a childhood memory of his father dropping a sack of newborn puppies into a canal in 1950s Manchester.) And Hareton, with the help of Cathy Linton, eventually redeems himself. Together, the young lovers hold the promise of a happy ending for Wuthering Heights – with or without animal companions.

The next fictional dog to make a deep impression on me was Shock, Belinda's indulged pet in Alexander Pope’s mock-epic poem, “The Rape of the Lock”. For me, the poem is a full-on olfactory assault. Let me break it down for you:

1. There’s a crush of people at Belinda’s house. Their combined body heat will heighten the ripeness of early eighteenth-century bodies.

2. This bodily funk will, in turn, be overlaid by the liberal use of perfumes.

3. The room will be lit by beeswax candles, which add their own sweet, thick scent to the air. (In a poorer household, the candles would be made of tallow and thus smell strongly of animals.)

4. As part of the ceremonial serving of coffee, Belinda’s family roasts coffee beans in the drawing room before grinding and brewing the expensive imported drink. Coffee-roasting novices expect the process to smell delectable but the toasting of green coffee beans actually produces a strong burnt aroma as the husks burn off; the roasted coffee smell emerges only at the end of the process. As a result, the smells of body musk and perfume would intermingle with the strong, acrid smell of burning.


5. The pampered, yipping, little dog Shock (whose name strikes me as a joke about the English pronunciation of “Jacques”), who fails to protect her from assault. I’m not sure how often pet dogs were bathed in 1717. However, in her biography of Samuel Pepys, Claire Tomalin describes the general domestic atmosphere of the 1650s: "Every house, every family enjoyed its own smell, to which father, mother, children, apprentices, maids and pets all contributed, a rich brew of hair, bodies, sweat and other emissions, bedclothes, cooking, whatever food was lying about, whatever dirty linen had been piled up for the monthly wash, whatever chamber pots were waiting to be emptied into yard or street. Home meant the familiar reek which everyone breathed." "The Rape of the Lock" takes place only 60 years or so later.

My third literary dog was a Newfoundland breed named "Boatswain". Having once read it, who could forget Byron’s "Epitaph to a Dog"? It's engraved on this monument at Newstead Abbey, Byron's family estate. 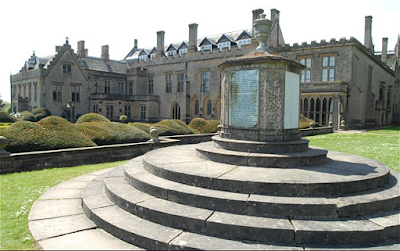 Near this Spot
are deposited the Remains of one
who possessed Beauty without Vanity,
Strength without Insolence,
Courage without Ferosity,
and all the virtues of Man without his Vices.
This praise, which would be unmeaning Flattery
if inscribed over human Ashes,
is but a just tribute to the Memory of
BOATSWAIN, a DOG,
who was born in Newfoundland May 1803
and died at Newstead Nov. 18th, 1808.

When some proud Son of Man returns to Earth,
Unknown to Glory but upheld by Birth,
The sculptor’s art exhausts the pomp of woe,
And storied urns record who rests below:
When all is done, upon the Tomb is seen
Not what he was, but what he should have been.
But the poor Dog, in life the firmest friend,
The first to welcome, foremost to defend,
Whose honest heart is still his Master’s own,
Who labours, fights, lives, breathes for him alone,
Unhonour’d falls, unnotic’d all his worth,
Deny’d in heaven the Soul he held on earth:
While man, vain insect! hopes to be forgiven,
And claims himself a sole exclusive heaven.
Oh man! thou feeble tenant of an hour,
Debas’d by slavery, or corrupt by power,
Who knows thee well, must quit thee with disgust,
Degraded mass of animated dust!
Thy love is lust, thy friendship all a cheat,
Thy tongue hypocrisy, thy heart deceit!
By nature vile, ennobled but by name,
Each kindred brute might bid thee blush for shame.
Ye! who behold perchance this simple urn,
Pass on, it honors none you wish to mourn.
To mark a friend’s remains these stones arise;
I never knew but one—and here he lies.

Byron’s anger and disgust with human hypocrisy here is all the more powerful because he practised it so well: “Thy love is lust, thy friendship all a cheat,/Thy tongue hypocrisy, thy heart deceit” is a cri de coeur from a restless artist who spent much of his life at the centre of a bubble of scandal.


There’s so much more I could say about dogs in literary history - and in social history, for that matter. But for the time being, I’ll return to my own practical dog research and continue to battle my residual squeamishness about dog odour and dog hair. Wish me luck!

---
Y S Lee is the author of the award-winning Mary Quinn Mysteries/The Agency Quartet (Walker Books/Candlewick Press). She blogs every Wednesday at www.yslee.com.
Posted by Y S Lee at 00:01

The predominance of smells in some of those descriptions reminds me of how excellent dogs' noses are - what an olfactory banquet history has been for them, without our human yeurckkkk response!
(With the exception of cat litter, cats smell gorgeous! Just saying.)

I like dogs far more than cats! My literary dogs would be: The Hound of the Baskervilles, Pongo and Missis from The 101 Dalmations, Gelert from the Welsh legend, and Luath and Caesar from Robert Burns' poem, The Twa Dogs.

Joan, as a cat owner until recently, I have vivid memories of cat breath! Definitely not my idea of "gorgeous". ;) But yes, those C18 dogs' noses must have been constantly overstimulated.

Becca, how could I have forgotten about _The Hound of the Baskervilles_? Terrifying! And I confess that I've never read "The Twa Dogs" but will change that straightaway. Thanks!

Loved the Rape of the Lock stuff. I wish you luck. I must confess I'd be resisting the campaign. I do prefer my dogs to be fictional, though I know it's probably not safe to admit this in public. Flush was always one of my favourites, and also Mary Anning's fossil-hunting dog Tray, in a book called 'Mary Anning's Treasures', I think.

One can not speak of literary dogs without mentioning Toto! The Wizard of Oz wouldn't be the same without Toto too. I read more about rabbits when I was growing up. I had a pet rabbit before we got our terrier (who was NOT a dog thankyouverymuch - she was the QUEEN of the world and far superior to any other species especially two-leggers and dogs). Also who can forget Nana in Peter Pan? She's literally the nanny. I thankfully don't remember the litter in Wuthering Heights but I know it was common to drown litters of unwanted cats and dogs. The idea of dog in the house as a child is a very recent idea. My dad grew up with much-loved dogs in the house in the 1960s but my mom didn't. My grandfather was ahead of his time with his poodles. My mom's family dog was mostly an outdoor dog.