We Need to Talk About Slavery by Tanya Landman

One of the many reasons I read and write historical fiction is because of the way the past shapes the present. Nowhere is that more evident than with the trans-Atlantic slave trade and modern day America.

Slavery has cast a very long shadow and its enduring impact is the subject of Joy de Gruy’s Post Traumatic Slave Syndrome.  The book is an eloquent, searing indictment of America’s “most serious illness."  She says, "Racism has run like a poison through the blood of American society since Europeans first landed on these shores… American’s denial of their blatant racism and the attending atrocities committed throughout the nation’s history has become pathological.  Such denial has allowed this illness to fester for almost 400 years. It is what keeps this country sick with this issue of race.” 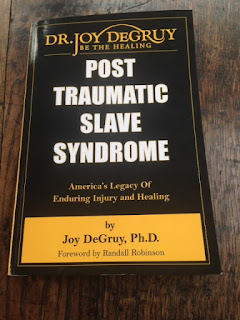 The title sums up what the book is about: slavery, the lasting damage it has inflicted on the African American psyche, and how that can be healed. The book really ought to be required reading both sides of the Atlantic.  And yet I’m guessing it won’t be. Why? Because people in power are reluctant to talk about slavery. David Cameron recently advised Jamaica to "move on" from its painful legacy.

But it’s not just white politicians who sometimes shy away from the subject. I first came across lawyer Bryan Stevenson when he was on Desert Island Discs and subsequently read his book Just Mercy.  Described by Desmond Tutu as “America’s young Nelson Mandela” Bryan Stevenson has devoted his life to  exposing racial bias in the US penal system.  Earlier this year he secured the release of Anthony Ray Hinton, an innocent man who had spent 30 years on death row in Alabama.  In a Guardian interview Stevenson said,  “What if someone came into the room and introduced themselves by saying they were a Holocaust survivor? Just those two words would make me stand up and give that person an honored place at this table. I would be responsive to them and I would let them talk as much as they wanted about the injury and trauma and hardship they had known. And rightly so. When it comes to the history of slavery and the terror that followed it right up to the 1960s, we have never done that. We do the opposite. You know, even me. I grew up in a segregated community, I couldn’t go to the public school, beaches, certain parts of town.  My grandmother was the daughter of slaves; she grew up in terror of lynchings, joined the great migration to the urban centres of the north to escape. But I never talked about that for the first 30 or more years of my life.”

It’s problematic comparing one atrocity with another and yet Stevenson’s Holocaust/slavery comparison is a pertinent one.  Quite rightly we remember the Holocaust, but there are no days of mourning, no statues, no memorials, nothing to commemorate the millions of Africans that suffered and died as a result of slavery.    We don’t even have a universally agreed word to describe this colossal human tragedy.  'Black Holocaust' is a term that has emerged recently, and  Joy de Gruy also refers to the ‘Maafa’ – a Swahili word meaning disaster, calamity, catastrophe.  But the fact that there’s no definitive word seems to me to be symptomatic of a lack of recognition and respect for the survivors of slavery and their descendants. 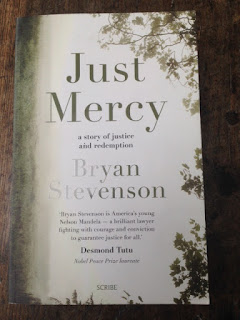 In one of Stevenson’s talks he invited his audience to imagine a situation in which present day Germany had a penal system that wrongly arrested, imprisoned and executed a huge number of Jews.  The thought is abhorrent.  And yet this is what is happening in America.  Black people make up 12% of the general population, yet a vastly disproportionate 50% of prisoners are African American.  Those figures reveal a huge racial bias in the justice system. Stevenson didn’t add, but might easily have done so - imagine a situation in which unarmed Jewish youths were regularly shot by the German police. Unthinkable. But in America unarmed black men are seven times more likely to die as a result of police gunfire than whites. Imagine a situation in which civic buildings in German towns still proudly flew the Nazi flag. Inconceivable. And yet in some American states, 150 years after the end of the Civil War, the Confederate flag still flies.

In Just Mercy  Stevenson says,  “Constantly being suspected, accused, watched, doubted, distrusted, presumed guilty, even feared is a burden borne by people of color that can’t be understood or confronted without a deeper conversation about our history of racial injustice.”

That conversation is long overdue.  And yet how can it even begin?  Joy de Gruy points out, “The fact that the delegation from the United States walked out of the United Nations World Conference Against Racism in August of 2001, a conference that declared American chattel slavery as a ‘crime against humanity’, only served to highlight America’s refusal to acknowledge this period in her own past.”

Collective acknowledgement of historic guilt on the part of white society in both Britain and America is, I believe, essential.  It’s also essential to recognise that white people still benefit from a social system that upholds the privilege of one part of the human race at the expense of another.

We need to start by speaking and hearing the truth.
Only then can we start on the journey towards reconciliation.

(Note: I have largely talked about the US in this article because both the books referred to were written by Americans.  However, I’m well aware that many of the same problems apply to Britain.)

Thanks for this Tanya. So often people are accused of 'going on' about stuff when in fact for many it's only a couple of generations old. x

Yes, as a daughter of Holocaust survivors I know that it's not that long ago for us either. And we too are told to "move on" and with all those people who were there there are the David Irvings of this world who either deny it happened or say it's too bad Hitler didn't finish the job. We know about racism too.

Great post, thank you. So many shocking stories in Britain as well as the USA - racism all too clearly still very much with us. At Amsterdam's Anne Frank's House museum there are some thought-provoking modern ethical questions on which people are asked to vote having learnt her story. We need those conversations spread.

You are absolutely right.
But I fear that, if the legacy of slavery and the holocaust were somehow made amends for and anti-semitism and racism somehow eradictated - then the human race would begin, collectively, to scape-goat the red-headed, or the short-sighted.
Scape-goating is a nasty side of human nature - and we should challenge and oppose it - but I think it will always be there. Scape-goats are politically useful.

People have told me to 'move on', too, and been astonished that I have written about the Holocaust - and not understood when I said: 'I'm half German.' I find this very strange. Germans usually get it when I speak of family history, but British people are usually the ones who say: 'You're British,' as if my passport made my mother and grandparents not my family? 'Move on,' usually means that one's concern with some issue is somehow inconvenient or embarrassing or unsettling to the interlocutor.To speak of the racism that underpins our society is to put spiky thistles on people's comfy couches. I remember when, on Social Responsibility Sunday at the Methodist Church we attended for a few years before I became a Quaker, David Haslam was invited to preach and he spoke of racism and the problems it caused. The response of the largely comfortably-off congregation was 'don't invite him again.'
I think this is a great post and you put it so well, Tanya. And in this conversation we should definitely be involving black people and listening to what they want to say, being sensitive to their feelings about it, as individuals. We should be listening to them, and, as you say, not shutting down if listening puts thistles under our behinds.

PS. David Haslam is a Methodist minister known for his radical and uncompromising views on injustice and racism. The church was lucky to get him, though they didn't know it.

West Germany did quite a bit to confront their past and its legacy, once the worst effects of the war were over. It's stood them in good stead, and a lot of the right-wing views arising there now are in the former GDR where nothing was confronted. America has done next to nothing and let's not even talk about their treatment of their indigenous peoples. As you say, Tanya; that festers. Great post.
I understand the worst 'holocaust' is problematic in itself, by the way, as it has the meaning of cleansing or purification.