This is my first blog for the History Girls and I'm thrilled that Mary has invited me to join you.


I've been thinking about the difference between writing about imaginary people and real ones. Are the people we invent less - or more - vivid than the historical characters we carefully research? I've just finished writing a novel called King of the Vast, which is the third volume of my Bedlam Trilogy. In the first, Nina in Utopia, a young Victorian woman finds herself in 21st century London.

When Nina returns to her own time, and talks about the wonderful future she believes she has seen, her husband, Charles, understandably thinks she is mad and has her confined to the Royal Bethlem Hospital, or Bedlam (where the Imperial War Museum is now). At this point my invented characters began to meet real people: Dr (later Sir)William Charles Hood, the humane reformer who was resident physician in the hospital in the 1850s and his friend, the Steward, George Henry Haydon. I then discovered that Richard Dadd, an artist I've always admired, would have been in the hospital at the same time as my imaginary heroine, Nina. Dadd became a minor character in the first novel and the main character in the second volume of the trilogy, The Fairy Visions of Richard Dadd.

I spent many enthralling hours doing my initial research in the archives of the Bethlem Hospital in Beckenham, in Kent, where there was also a small museum displaying the paintings and drawings of former inmates. This year it was reinvented from a prefab building to the beautiful Museum of the Mind, which is well worth visiting.


In 2011 at Tate Britain I saw a fascinating exhibition called John Martin:Apocalypse which made me decide to write a third volume about the successful Regency and early Victorian painter John Martin. This is a doppelgänger novel about his complex relationship with his brother Jonathan, who set fire to York minster because God told him to. 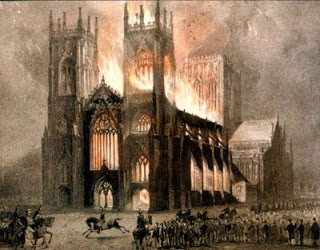 All three novels are set in nineteenth century London and are an attempt to explore art and madness. Each of the three is self contained, but linked by various common themes, including the hospital itself, art and time travel. I really struggled to finish King of the Vast, the final volume. I always find endings very difficult to write and the end of a trilogy poses huge problems because you have to give your readers some sense of closure, to tie the three together without being too slick about it. Jonathan Martin was an inmate in the Royal Bethlem Hospital in the 1830s and his niece Izzie visits the hospital, in my last chapter, in 1878.


The only character who spanned most of this period was the Steward, George Haydon. He had remained a shadowy character until I discovered on the internet a PhD about him by his descendant, Katherine Haydon. From this I learned that he had been to Australia, that he was married with children and lived with his family in the hospital, was interested in art and did some cartoons for Punch. In my first two novels he is an important and sympathetic character. Richard Dadd gave him his masterpiece, The Fairy Feller's Masterstroke, and in my novel Dadd, who is gay, has an unrequited crush on the Steward, who remained in the hospital from 1853-89. I wondered why such a charming and gifted man would have remained so long in the same rather dead end job.

Then, on the Bethlem Hospital website, I discovered that Haydon had a sister, Anna Maria, who was an inmate in the hospital for many years. This fact energised my fiction and also prompted a meditation on the very mysterious connections between real and imagined characters. In my head, I find, they occupy the same compartment. I'd love to know what the rest of you think about this.
Posted by Miranda Miller at 07:30

These books sound great - off to order the first one now!

Welcome to the History Girls, Miranda! I know you have visited as a guest before but it's good to have you on board.

I have the first two books and they are really excellent. I do think it's interesting, the relation between real and imagined characters, and it can surely only work if you make sure your imagined characters are firmly grounded in history - which is quite a challenge. I am dealing with this issue right now, as real characters would insist on strolling onto the stage of my Georgian novel. Nervous-making, but very interesting, and the research is fascinating, too.
Welcome on board, Miranda!

I'm part way through 'Nina in Utopia' and am really enjoying it. So original! Thank you