An important part of every historical novelist’s work is looking for the first glimmer of the next story. Finding that apparently unexciting fragment from the past that suddenly makes your storytelling lightbulb switch on – the eureka moment - is one of the most rewarding moments of the job. I always have half an eye open for it, whether I’m reading Chaucer or a Cornflakes packet. But, all the same, I was surprised this week to find a humdinger of a historical fiction story idea while following a particularly dry and academic-looking footnote from somewhere else to the 4,000-page Complete Works of Sigmund Freud. 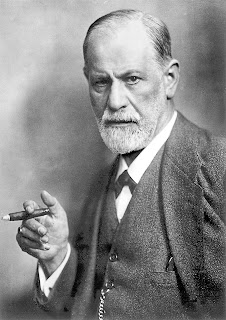 Freud arouses strong feelings. His acolytes revere him for revealing the workings of the human mind. Others loathe him. (The Russian-born author of Lolita, Vladimir Nabokov, was a case in point, always denouncing the dirty-mindedness of the “Viennese witch-doctor”– though, given the child-abuse plot of Lolita, those two men were perhaps never going to see eye to eye). I’ve read a fair bit of Freud, but I haven’t had either strong reaction till now, just a slight wish to yawn at the clunkier translations. It’s always felt very clear to me how hard Freud is striving to be scientific. (This doesn’t put him at the top of my bed-time reading pile). His work is all real, argument piled on theory on case study. He doesn’t make stuff up.

Which is why I was so surprised this week to come across his essay on Leonardo da Vinci, another bearded genius - the Renaissance Florentine painter and investigator of nature, anatomy, birds, flight, war machines and much more – 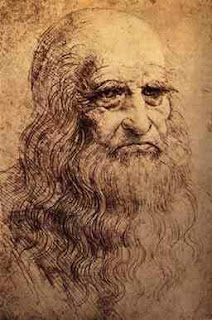 because what a brilliantly creative work of the imagination it is. Sherlock Holmes would be proud to have investigated Leonardo the way Freud did, joining up dots no one else would even have seen to produce a quite extraordinary story and producing it with an “elementary my dear Watson” flourish.

It starts in an ordinary enough way. After speculating that Leonardo’s genius came from sublimating his sexual impulses into art and science, Freud tells us the few facts known about Leonardo’s life – that he was illegitimate, raised by his mother as a baby, then taken into his notary father’s home at the age of five, and from there went to train as an artist in his teens. He was gay, probably, and took on beautiful young male apprentices, though whether he actually had sex with men is not known. What became of his birth mother is unclear too.

So far, so ho-hum. Then comes the master’s touch. Enter the vulture.

“There is, so far as I know, only one place in his scientific note books where Leonardo inserts a piece of information about his childhood,” Freud goes on. “In a passage about the flight of vultures he suddenly interrupts himself to pursue a memory from very early years which had sprung to his mind: ‘It seems that I was always destined to be so deeply concerned with vultures; for I recall as one of my very earliest memories that while I was in my cradle a vulture came down to me, and opened my mouth with its tail, and struck me many times with its tail against my lips.’” 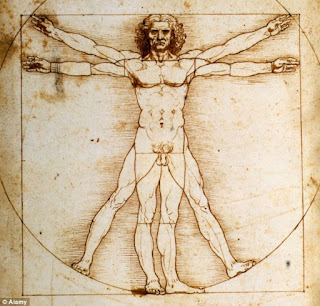 But then the fun begins. Freud also tells us that the Ancient Egyptian mother goddess, Mut, was represented in pictures as a vulture. All vultures were believed to be female, impregnated by the wind in mid-flight. Leonardo might have known this, because the Fathers of the Church liked this old pagan story that seemed to confirm that virgin births (such as that of Jesus from Mary) were possible.  “We can now reconstruct the origin of Leonardo’s vulture phantasy. … He also had been such a vulture-child - he had had a mother, but no father.”

Leonardo flagged as a painter in mid-life – he wanted truth to nature too much to ever be satisfied with his creations - and instead spent years designing machines for the Duke of Milan and berating himself for artistic laziness.

But then, as a 50-year-old man, Leonardo’s notebooks show he took in an elderly woman called Caterina, and on her death paid for her burial. Freud’s imagination goes wild here. He takes from a now forgotten Russian novel the idea that Caterina may have been Leonardo’s long-lost mother, with whom he was possibly reunited at the end of her life - and who reawakened his genius for paint. 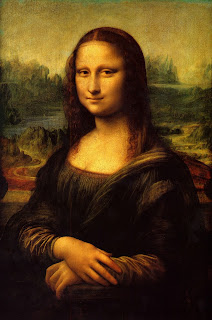 Soon afterwards, in Freud’s retelling, Leonardo came across a smile that he finally allowed to remind him of the blissful early years he had spent alone with his mother. It was the smile we see in the Mona Lisa, his portrait masterpiece, and then over and over again in the surge of painterly creativity that followed. For the rest of his life Leonardo created figure after figure with that same enigmatic, tender yet terrible smile, finally bringing it to life not only on the face of the Mona Lisa but also on those of St Anne and the Virgin Mary, playing with the infant Jesus, and Leda, and even on the male faces of Bacchus and of a rejuvenated, beautiful, St John, a swaying figure of almost feminine beauty. By being reunited with his mother in his middle years, Freud hazarded, Leonardo must finally have solved the problem of his early sexuality and managed to unite the images of a smiling mother and the beautiful boys into one artistic whole. For Freud, this represented Leonardo living happily ever after.

Fascinating though this was, I didn’t completely buy the theory until I read the footnote Freud added in 1919. 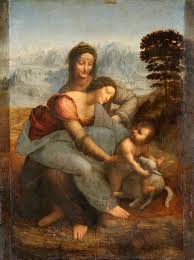 “A remarkable discovery has been made in the Louvre picture [Jesus with his enigmatically smiling mother and grandmother, St Anne] by Oskar Pfister, which is of undeniable interest, even if one may not feel inclined to accept it without reserve. In Mary’s curiously arranged and rather confusing drapery he has discovered the outline of a vulture and he interprets it as an unconscious picture-puzzle: ‘In the picture that represents the artist’s mother the vulture, the symbol of motherhood, is perfectly clearly visible. In the length of blue cloth, which is visible around the hip of the woman in front and which extends in the direction of her lap and her right knee, one can see the vulture’s extremely characteristic head, its neck and the sharp curve where its body begins. ‘

Enthusiastically, Freud added a line drawing of the picture to his article, with the “vulture cloth” drawn in darker than the rest, to support his killer proof, quoting Pfister: 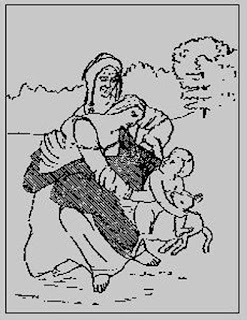 “‘The important question however is: How far does the picture-puzzle extend? If we follow the length of cloth, which stands out so sharply from its surroundings, starting at the middle of the wing and continuing from there, we notice that one part of it runs down to the woman’s foot, while the other part extends in an upward direction and rests on her shoulder and on the child. The former of these parts might more or less represent the vulture’s wing and tail, as it is in nature; the latter might be a pointed belly and - especially when we notice the radiating lines which resemble the outlines of feathers - a bird’s outspread tail, whose right-hand end, exactly as in Leonardo’s fateful childhood dream, leads to the mouth of the child, i.e. of Leonardo himself.’”

It’s stunningly weird - more Da Vinci Code than Da Vinci, in my view – but it’s an absolutely stunning stimulus to the imagination, too. For some reason, that fanciful line drawing has got me wondering, all week, what Leonardo’s mother was like, and whether she can really have had the Mona Lisa smile, and whether she could possibly have come home to die at his studio, and how that would have changed him, and how their early relationship might have made him the artist he was …. And even wondering, just a bit, how you could possibly bring all the crazy-sounding Egyptian-vulture-goddess information dumps into a fiction without it looking too incredibly lame …

So Freud’s flight of fancy has convinced me. Perhaps it is a pity he did stick almost entirely to writing about the scientific reality he thought was in our heads, and smoking cigars. He would have been a great historical novelist.

I struggle to see the vulture of the cloth... but what a great story, a Pagan Da Vinci code indeed, but also the working of two fascinating creative minds upon each other across time.

I think Freud was a great historical novelist! This post is fascinating. Great minds working their way through the woods to reach their creativity.