Hitler and Marigolds by Julie Summers

There is nothing more delicious than discovering a private diary, written moons ago, that was never intended for publication. It has been my great good fortune to find several in the course of my work on the Second World War but the jewel in the crown for me were the diaries of Edith Jones, which form the golden thread through my book about the Women's Institute, Jambusters. When I tell people I have worked on the WI for over six years I get mixed reactions. Some pity, some incredulity that a women's organisation with a reputation for jam and Jerusalem would be of any interest to an author and sometimes, just sometimes, a nod of acknowledgement that this is a great topic. Well, let me reassure you that those in the third category are right.

As this is my first blog for the History Girls I thought I would kick off with the WI. This year is the 100th anniversary of the Women's Institute of England and Wales. Scotland has its own Scottish Rural WI. Born in Llanfairpwll on Anglesey in 1915, it was founded in part to help with food production during the First World War. However, its main aim was, and remains, to educate its membership. The full story of the WI is told in a new book Women's Century: an illustrated history of the Women's Institute by Val Horsler and Ian Denning. 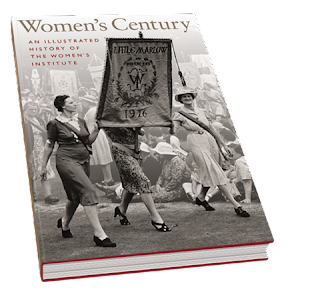 It is a handsome publication that fulfills its promise by charting the 100 years in a gallery of mainly black and white images. Some are hilarious but the majority tell a tale of versatility, determination and good humour. The authors thread the story neatly through the book, focusing on the WI's key activities: education, campaigning and public affairs.
We all know about the Calendar Girls, and yes, they are there. As is the Queen, a member since 1943. But the more unexpected aspects of the WI's work is also celebrated. When do you imagine the WI resolved to get a ban on smoking in public places? 1964. They were 15 years ahead of the UK Green Party in lobbying the government to do more about recycling and researching renewable energy. And the Terrence Higgins Trust paid them a great compliment in 1987 when they campaigned for the use of condoms for safe sex: 'The WI does not flinch from the more difficult issues.' Indeed it does not. And it certainly did not flinch during the Second World War. 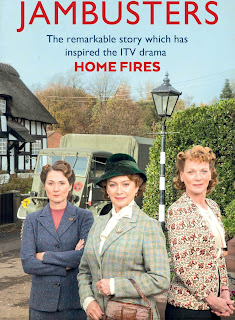 My brother, Tim, is responsible for the title Jambusters but he could have no idea how accurate a title it is for the WI's wartime activities. At a fundamental level the WI bust bureaucratic logjams and kept the countryside ticking. Their general secretary, Frances Farrer, had a reputation for phoning government ministers before breakfast so she could be sure to get their attention. She ordered 430 tons of sugar on 6 September 1939 in response to calls from members all over the country worrying about the bumper harvest going to waste in gardens and orchards that had been evacuated. Result: 1740 tons of jam by October. Over the course of the war the WI made jam for the Ministry of Food, it collected herbs for the pharmaceutical industry, it advised the government on housing, sanitation and education and much more besides. But it also kept its membership entertained, informed and in touch.


When I was writing Jambusters my biggest problem was too much information. The WI archives at national, county and village level offer minute and fascinating detail about anything and everything they have ever been involved in. But it is all impersonal, in the form of minutes, records and letters. Occasionally there is a hint of fury in Miss Farrer's letters to the Ministry of Mines about petrol rationing but by and large it is factual detail. Yet the WI is an organisation full of personalities and I needed to get into someone's head. This is where Edith Jones' diaries came in. She was WI to the core and embraced the organisation from the moment it started in her remote village on the English/Welsh border in 1931.


She was a tenant farmer's wife and had little opportunity to broaden her horizons or go beyond the market town of Shrewsbury until the WI arrived. This gave her the chance to travel - she went to London in 1938 to attend the National Federation's AGM - and to meet women from other WIs in Shropshire. She recorded her everyday life in brief but delicious detail in diaries given to her by the Electricity Supply Company. That was an irony: Red House Farm, where she lived, did not get electricity until 12 years after Edith retired and moved away. Some of the juxtapositions are delightful. In September 1943 she wrote: 'Italy surrenders. I put new flower in hat.' On another occasion her puppy had fleas. On that day, 20 July 1944, she recorded the following: 'Hitler's life threatened by bomb. Puppy is very lousy, so Margaret is sorry for him & gives him a sound bathing and dressing.' How extraordinary that she heard about the failed Stauffenberg plot on the day it happened.


All during the war there was a running thread of anxiety in the diaries for the safety of her nephew, Leonard, who had lived with her since he was a boy of six. He survived the war, returning from Africa in 1945. So although Edith saw no action she was aware of the constant threat to her family life. Five days before the war ended she read about Hitler's suicide. That day she recorded simply: 'Hitler confirmed dead. Jack sows marigolds.' I found that extraordinarily poignant when I first read it. The madness of the war was over and her husband, Jack, planted marigolds to keep flies off her flowers and vegetables. And what did Edith Jones do the day after the war ended? She went to her WI meeting where they discussed bringing electricity to the village: 'no agreement' she wrote. She carried on going to WI meetings until shortly before her death. For her the WI was a way of life and the war represented merely an episode in that long life.

What a fascinating story. I've heard so many ill-informed sneers about the WI - partly because some people think all they do is cakes and jam ( though what's wrong with cakes and jam?). People just don't know all the campaigning they do.

Really enjoyed your talk at the Harrogate History Festival, Julie.

I hope you will be writing more for the blog Julie, it can be a long wait for us between books!

Thank you, Di, for a reminder that I'd better get on with my next two books!

There's a chance you are qualified for a new government solar energy program.
Determine if you're eligble now!