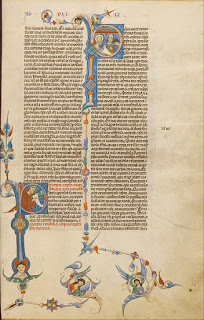 I love old dialect words and one of my favourites from the West Country is bless-vore meaning a spell or charm intended to do good. I was suddenly reminded of bless-vores when I heard the news that, in future, Acts of Parliament will only be printed on paper and not on vellum.

Up to 1850, any Bill being presented before parliament was written on a parchment roll. This roll was then sent through various stages in the Commons and the House of Lords, but however much the Bill changed, it was never re-written on a new roll. They simply scratched out words to be removed from the parchment and wrote the amendments over the top. The longest Act of Parliament still preserved in the form of a scroll is an 1821 Act concerning, as you might guess, taxes. It’s almost a quarter of a mile long. Imagine re-rolling that! But in 1849/1850, parchment rolls were replaced by parchment codices or booklets, and from then on, two copies of each Act were printed on vellum, one for the House of Lords and the other to be stored in the Public Record Office.


What has that to do with bless-vores, you might ask? The link is that long after paper had become commonplace and cheaper than parchment, written charms or bless-vores were thought to be most effective if they were written on scraps of vellum or parchment rather than paper. In fact for the best results, charms had to written on virgin parchment, that is parchment made from the hide of an animal that had not yet mated, or even more gruesomely on unborn parchment which was made from a calf or kid cut from the womb or aborted. According to Robert Turner, writing in mid-1600's, a London shop called the Lamb and Inkbottle, not only sold inks and parchments, but also potions that would produce animal abortions for customers wishing to produce their own unborn parchment.

Written charms were usually worn round the neck in little bags, sewn into clothes or rolled up and pushed into holes in the walls of barns and cottages to protect the inhabitants from sickness and witchcraft. Buyers were warned that if these charms touched the ground, the power would drain out of them. On the other hand, charms intended to protect livestock or lift a curse from land would often be buried in boxes or bottles in the corners of fields, at a point where the rising sun first touched the field.

The words of the written charms themselves often included biblical phrases, so when you come across one, it’s sometimes hard to tell if this is a scrap of a prayer intended for devotional use or a charm written by a cunning-woman or man, especially as many were written in Latin or cod-Latin with some Hebrew thrown in. A typical example from the 19th century reads - 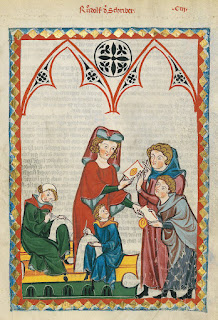 It is likely that many of these would have been copied or miscopied from prayer books or church inscriptions by the charm-writer who had only a vague idea what the words meant. Often these were sealed with wax or sewn into a bag, so that they could not be read aloud for fear of them losing their power or calling down something worse.

Other charms were intended to read out, like the one sold to a Devon couple who feared their horse had been cursed. The charm-writer told them to read the charm aloud three times. It calls upon the names of three angels and the Holy Trinity and includes the line -


‘I do this to torture and torment that man or woman who has injured us.’


During the Middle Ages, the wearing of charms was not condemned by the Church. Thomas Aquinas said there was nothing unlawful about attaching holy words to the neck. In Malleus Maleficarum (The Hammer of the Witches, 1486) there were seven rules to tell if a charm was holy or evil, amongst them was that the words of a holy charm should not suggest a pact with the devil and should only use phrases that were Biblical in origin. Unfortunately , just a century later, ‘witches’ could be punished or even sentenced to death for possessing any kind of charm, holy or not, especially during the centuries of Protestant rule. But this certainly did not stamp out the practise.

As the Members of Parliament found, one of the advantages of using parchment is that the words can be scratched off and this property was used in some charms intended to cure illness. The charm would be written in full on parchment then every day or every week one line or word of the charm would be scraped off while the owner said ‘As these words are destroyed, so may the sickness be destroyed.’ Such charms were frequently used if a long-distance cure was required.

Another property of parchment is the ability to pour water on it without it disintegrating, so the patient might be advised to pour wine or spirits across the words written on the parchment to dissolve them then drink the dissolved words to produce a cure.

In medieval times this could also be used as test of innocence or guilt. Words from a psalm would be written on parchment then the ink was dissolved in wine and holy water. The suspect would be forced to drink the mixture. If he was guilty the words would choke him and he would cough, vomit, or in some cases even die. It must have been only too easy to condemn an innocent man using this method, by adding an irritant or even poison to the ink or wine.

But times are changing and no longer keeping the Acts of Parliament on vellum, may hopefully save the lives of some animals and money for the taxpayer, but as MP Tory Gerald Howarth remarked,


‘The death warrant of Charles I was recorded on vellum.’

"Whereas Charles Stuart King of England is and standeth convicted attainted and condemned of High Treason and other high crimes, And sentence upon Saturday last was pronounced against him by this by this Court to be put to death by the severing of his head from his body of which sentence execution yet remaineth to be done, these are therefore to will and require you to see the said sentence executed in the open street before Whitehall upon the morrow being the Thirtieth day of this instant month of January between the hours of Ten in the morning and Five in the afternoon of the same day with full effect and for so doing this shall be your sufficient warrant."


And somehow, all these centuries later, I don’t think I would feel so quite so moved when I look at this momentous document, if the king’s death warrant had been issued on an A4 sheet of copy paper.

After all these centuries that A4 sheet of copy paper would be long gone! ;-) Future historians of this era will have a lot more trouble finding primary documents for their research, eh?

And of course the Romans wrote curses on one of the most durable materials ever: lead! Fascinating post, Karen. I loved it.

Absolutely fascinating, I agree. Reminded me of a long-ago conversation with my lawyer grandfather, who told me about rescuing legal documents after flooding during the Blitz, and the durability of vellum in such difficult circumstances. It does seem a shame.

Oooh, dialect words. *adds to list of interesting words* Fascinating stuff about written charms - I think I shall have to use that in a story one day...