Pale hands I loved beside the Sagredo – Michelle Lovric 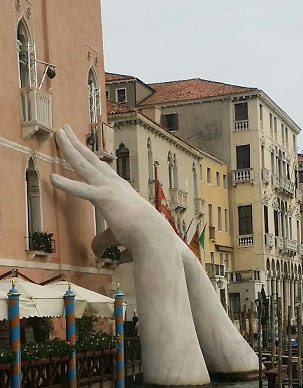 My title messes with ‘Pale hands I loved beside the Shalimar’, the celebrated first line of ‘Kashmiri Song’, a poem by Laurence Hope (Adela Florence Nicholson) published in her collection The Garden of Kama, 1901. As a special treat, here is Rudolph Valentino vamping his way through the song adaptation written by Amy Woodforde-Finden in 1902. Apparently, it was his favourite.

No wonder Sheikish Rudolf loved this poem. It’s as sexy as hell, with a nice little throb of sadomasochism in the final lines.

Pale hands I loved beside the Shalimar,
Where are you now? Who lies beneath your spell?
Whom do you lead on Rapture's roadway, far,
Before you agonise them in farewell?

Oh, pale dispensers of my Joys and Pains,
Holding the doors of Heaven and of Hell,
How the hot blood rushed wildly through the veins,
Beneath your touch, until you waved farewell.

Pale hands, pink tipped, like Lotus buds that float
On those cool waters where we used to dwell,
I would have rather felt you round my throat,
Crushing out life, than waving me farewell!

The pale hands pictured above are to be found beside Ca’ Sagredo on the Grand Canal in Venice. The installation is called ‘Support’. Pink tipped and like lotus buds they may be, but these hands are on a vast scale.

Before I noticed the title ‘Support’, my reaction to the hands varied according to my state of mind whenever I saw it. Sometimes they seem benign; other times sinister and grasping. They’re close to my home and I pass them at least twice a day, witnessing the way they transform by dawn and evening light, and in the dark. I have discussed them with friends and with strangers on the vaporetto. Once, when I was hungry, I imagined some monstrously greedy Hansel had decided that Ca’ Sagredo was built of tear-and-share gingerbread, and he was reaching out to snap off a corner for a snack. Another time, when I was worrying about a sick friend, the hands conjured those of an expert but tender nurse reaching out to re-set a broken bone. One fiery sunset, they seemed to cup the flames of hell. At night, they are always ghost hands, questing after souls to drag into the black water. And of course, whenever I see them, the ear-worm wriggles in my head, chanting, ‘Pale hands I loved beside the Shalimar …’ 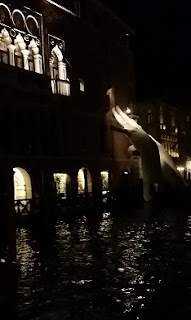 Projecting one’s feelings on modern art is very enjoyable. But I find I’m usually wrong and this case is no exception. In fact, the artist, Lorenzo Quinn intended this piece as a statement on the effects of global warning. The future of the planet is in our hands. Our hands can destroy or save the planet. Our power is out of proportion with nature, and with the nature of what we have created. Quinn wanted the piece to be juxtaposed against the waterline of Venice, where global warming poses a visible and immediate threat with each high water.

According the Halcyon Gallery, which represents Quinn, ‘At once, the sculpture has both a noble air as well as an alarming one – the gesture being both gallant in appearing to hold up the building whilst also creating a sense of fear in highlighting the fragility of the building surrounded by water and the ebbing tide.’ 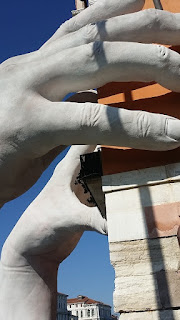 Quinn has said, ‘I wanted to sculpt what is considered the hardest and most technically challenging part of the human body. The hand holds so much power – the power to love, to hate, to create, to destroy.’

So in fact, the threats barely veiled in the poem do have some resonance here. Nor was I so far out with my idea of Hansel as these are supposed to be gigantic child hands, modelled on those of the artist’s son. The boy’s mother and grandmother are Venetian: Quinn identifies warmly with the city.

Quinn fashioned the hands from polyurethane foam coated with resin, using an ancient technique known as ‘lost-wax casting’. I so wish I’d been there to see the day they were installed. Fortunately, this lovely film records the event.

The 30-foot hands first surged out of the water in May 2017, originally part of the Biennale of Art. They have captured the imagination of the city and been allowed to stay on beyond the Biennale’s closing last November. In an interview with the Telegraph last year, Quinn explained, ‘There’s a saying in Italian: “Non metter le mani sulla città” (Don’t put your hands on the city), and I went and did it. But they love it!’ 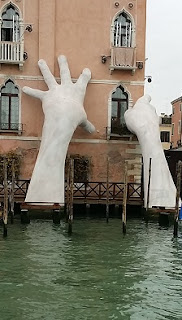 After a year on the water, I’ve noticed some endearingly human signs of aging: a hairline crack near one knuckle and some discolouration that could be bruising. They are, in fact, growing old the way a Venetian palazzo grows old.

Nearly everyone I know in Venice will be sad when the hands finally leave. But they still have environmental crusading to do. Their next destination will also point accusing fingers at the human authors of climate change. Lorenzo Quinn plans to install them on an Arctic glacier. He will shoot a time-lapse video as the ice melts. As he told the Telegraph, ‘In a few months they’ll be gripping thin air and people will see this is real, this is happening.’

Wonderful sculpture! It immediately made me think of water-spirits: naiads and nixies. I suppose a vengeful naiad reaching up to tear a building down would work with the global warming theme.

Lovely story - thank you Michelle. I enjoyed the imagery of the changing meanings of the hands, and the sculpture is amazing - I had not come across it before.

Interesting but, to me, spooky!