Cabinet of Curiosities by Charlotte Wightwick: Manuscripts, Magical and Remarkable 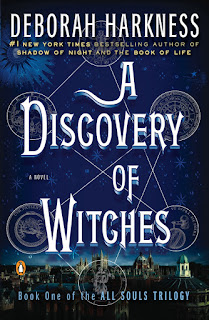 As its Halloween, it is almost obligatory that I should write about things that go bump in the night. This year, I’ve been enjoying my spooky fix via Sky’s Discovery of Witches – a TV series featuring witches, vampires and demons, based on the All Souls trilogy of books by Deborah Harkness. I first read – and greatly enjoyed - the books some years ago, and have to admit to rather mixed feelings about the TV series. The actors are generally great (although personally I’m not sure about all the casting choices!) and the cinematography and locations are beautiful. But, as is inevitable with any adaptation, they’ve had to leave things out, or at least not give them the prominence they receive in the novels.

In Harkness’ books, the Twilight-style romance is leavened with a real passion for history. The protagonist Diana has a non-magical career an academic historian, and her love for the subject – or rather, that of Harkness (herself a professional historian before she turned to novel-writing) really shines through. In particular, significant time and space within the novels is devoted to loving, meticulous descriptions of the illuminated manuscripts Diana studies (and which cause her such supernatural trouble – her discovery of a bewitched book kicks off the plot).


The only other place where I’ve read such bewitching (excuse the pun) yet accurate descriptions of medieval manuscripts is in Christopher de Hamel’s wonderful Meetings with Remarkable Manuscripts (if you’ve not yet read it, it is worth getting your hands on the hardback version for the beauty and quality of the reproductions.) Taking one manuscript per century between the C6th and C16th, de Hamel walks his readers through what it is like to see, feel, touch and smell the reality of these rare and precious objects, as well as explaining the historical and social conditions in which they were created. It is accessible, scholarly and passionate; beautiful and illuminating all at once, as perfect and jewelled as the manuscripts he describes. 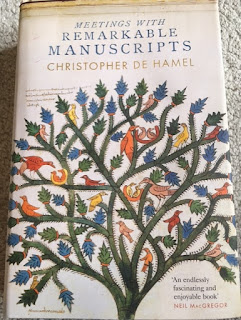 So, my item for the Cabinet of Curiosities this month? Definitely a medieval manuscript. But I’m torn. My personal favourite from de Hamel’s book is the fourteenth century Hours of Jeanne de Navarre, with its stunning and intricate gothic illuminations. But I do wonder if I might be allowed Diana’s fictional, magical Book of Life, explaining through alchemical imagery the origins and destinies of vampires, witches, demons and humans?

Well, it is Halloween, when the veil between the mundane and the magical is supposedly at its thinnest, so maybe, just maybe…