The Elf-Mounds of Ireland... (2) by Katherine Langrish 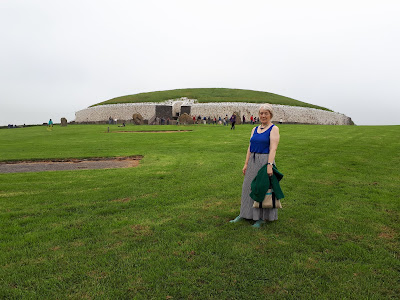 Following on from my last month's post on the mound at Dowth, here I am, thrilled to be standing in front of the magnificent passage grave of Brú na Bóinne or Newgrange, in Co. Meath, Ireland.  Another of the Elf-mounds of Ireland, it was explained in later years as the palace of Oengus, foster-son of Midir, king of the Sidhe.

Thrilled? I was blown away! As a Neolithic junkie, this has been on my bucket list forever. Yes, I know the facade has been restored - and yes, I know the restoration has raised eyebrows in various quarters; in fact when it gets really nasty the word 'Disneyfication' is thrown around - but I kind of appreciate the attempt to try and give the visitor some idea of the way the place used to look. Or might have looked...

It's not as though we inherited a pristine site to begin with. The exterior of the great mound had suffered much damage in the past. It was dug into during the 1600s, and by the early 19th century a folly had been built close to the site, using stones taken from it (it's still there). By the late 19th century the entrance of Brú na Bóinne looked like this... 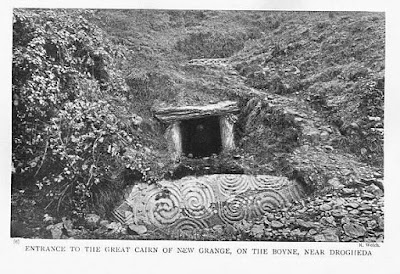 ...while by the early 1900s some of the debris and earth had been cleared away and it looked like this. 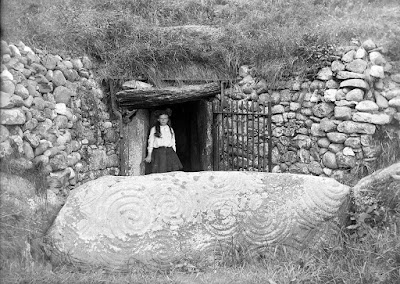 Between 1962 and 1975 the site was excavated by Professor Michael J. O'Kelly, who decided to reconstruct the facade of the monument from the collapsed stones lying at its base: an intriguing mixture made chiefly (here I quote from Wikipedia) of  "white quartz cobblestones from the Wicklow Mountains about 50 km to the south." But there were also "dark rounded cobbles from the Mourne Mountains about 50 km to the north; dark gabbro cobbles from the Cooley Mountains; and banded siltstone from the shore at Carlingford Lough." Noting where the stones had fallen, Professor Kelly looked at how the ratio of white quartz to dark cobblestones changed along the facade, and restored it according to his own impressions of how it might have appeared. I particularly like the gradation from dark at the far edges, to white in the middle. 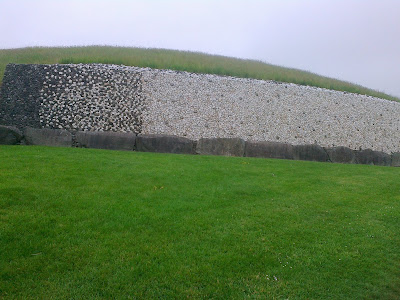 Here's a close-up of the whiter part, studded with those round dark 'statement' boulders. 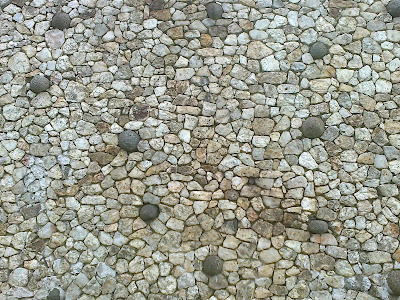 It's been much hated. In 1983 the French archeologist Pierre Roland Giot said it looked like "cream cheesecake with dried currants distributed about" while more recently the tv archeologist Neil Oliver has criticized as "a bit overdone, kind of like Stalin does the Stone Age". Maybe so... especially since the stones of the new wall have been set in reinforced concrete. "Another theory is that some, or all, of the white quartz cobblestones had formed a plaza on the ground at the entrance." Who can say? As a Yorkshirewoman I have a lot of respect for the dry-stone-walling techniques of our forbears. Today however, the entrance looks like this (see below) and those dark cut-outs on either side, faced in black stone, are unashamedly modern, making room for the steps by which visitors can come and go - serving the practical purpose of protecting the vast carved stone in front of the doorway from people who might otherwise scramble over it. 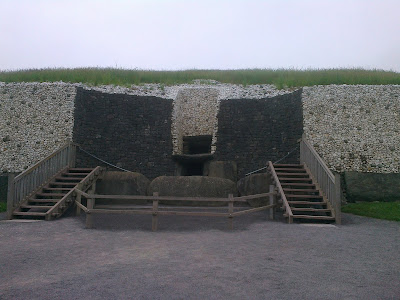 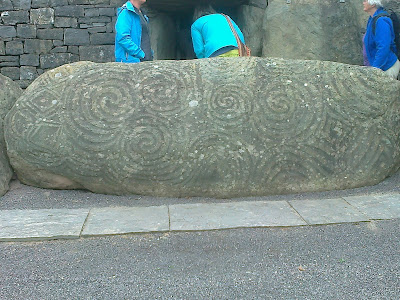 I know what Neil Oliver means, though... but however the stones were once arranged, their presence is still impressive, and the vast kerbstones which rim the foot of the mound are in their original places. Just protected from rainfall erosion here and there. Here's myself and my husband, book-ending one of them. 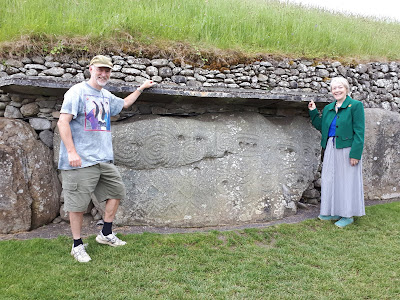 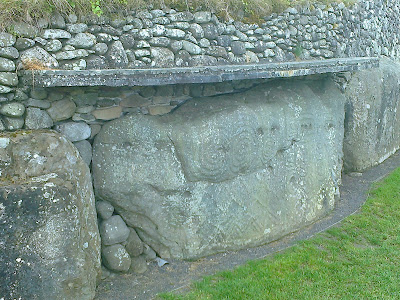 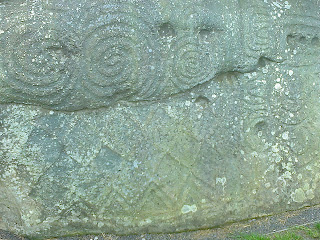 If the impressive, restored exterior leaves doubts as to its authenticity, the interior has not been touched. The stone-lined passage into the mound (where amateur photography is forbidden) and the amazing, high, corbelled chamber like the inside of a witch's hat, with its intricate spiral and chevron carvings, and the two huge stone dishes laid in the side chambers - these remain as they were in prehistory - as incredibly moving as they must always have been.

The marvellous website Voices from the Dawn tells how when Professor O’Kelly began the excavation in the early 1960,  he became aware of a recurrent local tradition that the sunrise used to light up the triple-spiral stone at the end recess far within the tomb. Professor Kelly wondered, having recently uncovered Newgrange’s unusual ‘roof-box’ - that rectangular aperture you can see in the photos above the entrance - whether it had been intended to admit the light of the rising sun. He tried it out at the winter solstice on 1967,  and two years later repeated the experiment:-


"At exactly 8.54 hours GMT the top edge of the ball of the sun appeared above the local horizon and at 8.58 hours, the first pencil of direct sunlight shone through the roof-box and along the passage to reach across the tomb chamber floor as far as the front edge of the basin stone in the end recess. As the thin line of light widened to a 17 cm-band and swung across the chamber floor, the tomb was dramatically illuminated and various details of the side and end recesses could be clearly seen in the light reflected from the floor. At 9.09 hours, the 17 cm-band of light began to narrow again and at exactly 9.15 hours, the direct beam was cut off from the tomb. For 17 minutes, therefore, at sunrise on the shortest day of the year, direct sunlight can enter Newgrange, not through the doorway, but through the specially contrived slit that lies under the roof-box at the outer end of the passage roof.”

Since the light-box had been blocked with stones, and covered for many centuries with the collapsed walls of the mound (see the early black and white photos above) no one could possibly have seen this effect in modern times until the professor uncovered it. This, then, may be a very old memory indeed. And for more about Brú na Bóinne's Elf-mound connections, see next month's post!

Definitely something to add to my own bucket list! Do we know whose tomb it was?

Sue, the tomb is Pre-Historic with capitals -- we can never have any idea whose tomb it was, what their names were, what language they spoke or anything much about them. We can only guess.
Newgrange seems to have been the equivalent of Maeshowe in the Orkneys, where the first light enters the tomb at the midsummer solstice (but I am no expert.) Anyone with a more accurate memory -- Kath Langrish, Joan Lennon? -- please correst me, but I believe Maeshowe was a communual grave where the bones of many people were sorted into side chambers. I think I read that not all of the community were there -- no infants, for instance. So, were the graves kept for certain favoured families? -- We can never know.

And Kath -- thanks for the blog!

That's right - no chance of ever knowing, I'm afraid. But all the more scope for that tingle of speculation!

I'm a huge fan of all things old and Celtic, and have been to Ireland and Scotland and England a few times... I'm just impressed you do your exploring in a long skirt!

I went in 1995, with a group from that year's CLNE Summer Institute that was being held in Dublin. by that time, and presumably now, small pre-booked groups are admitted to the central chamber, all the lights are switched off, and a searchlight mimics the midwinter sunrise effect. Very eerie, even though you know it isn't the actual sun doing it. We were told then that the midwinter sunrise entries for the next 10 years was already fully booked.