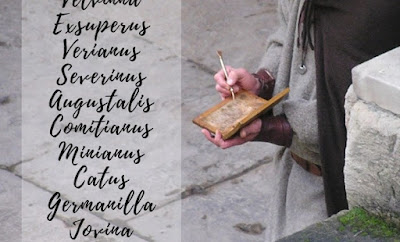 The loss of Vilbia is the most famous cold case that’s come down to us from the Romano-British town of Aquae Sulis (modern Bath). The aggrieved party – whose name we don’t know – called up the goddess Sulis Minerva’s help by writing the suspects’ names on a thin sheet of lead, rolling it up and throwing it in the pool above her sacred hot spring. It wasn’t alone: well over a hundred other curses have been found buried in the silt and others may be hidden there still.

Most of the spidery letters on the scraps of lead are the work of victims asking Sulis Minerva to avenge a crime. Some name the suspects. Some don’t say what they did: presumably the goddess knew what Britivenda and Venibelia had been up to and could punish them accordingly.

Often, though, the victim had no idea who had wronged them. The curse on the modern reproduction below translates as “the name of the culprit who stole my bracelet…” There’s a space left, but no name in it. 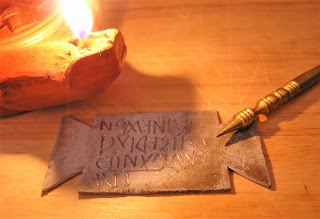 When no likely evildoer could be identified, the aggrieved party often reminded the goddess to suspect everyone, “whether man or woman, slave or free.” Children could be in the frame too -“whether boy or girl” - and once, “whether pagan or Christian”.

Some victims offered Sulis Minerva a share of the stolen goods if they were recovered – a sort of ‘no win, no fee’ deal, with the suggestion that the hot property could be handed in anonymously at the temple.

A few of the lead sheets are blank. Others bear rows of squiggles, perhaps put there by people who knew what writing looked like but couldn’t actually do it. All but two seem to have been in different handwriting: some educated, some very clearly not. Writing backwards might have made the curse more powerful: it certainly made for more spelling mistakes. But no matter what was being written, the sight of a stylus waking the dull surface of the lead into a gleaming message for the goddess might have frightened the guilty party into repentance.

If the culprit didn’t co-operate, though, bad things lay in store. Docimedis, whose gloves had gone missing, demanded that the thief should lose his minds [sic] and his eyes. Anyone even remotely involved in the theft of Basilia’s silver ring was to be accursed in blood, eyes and every limb, or even have all his or her intestines eaten away. 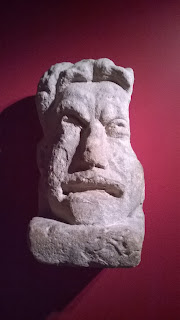 Sometimes the thief’s whole family was cursed. And sometimes the curses were subtle enough to work on the conscience. Whoever stole Docilianus’s cloak was to be deprived of both sleep and children until the cloak was returned to the temple. Whether or not he [or she, slave or free] knew the exact wording of the curse, it’s not hard to imagine them lying awake in the night watches and wondering whether they would get a better night’s sleep tomorrow if they got up now and delivered the stolen goods to Sulis Minerva under cover of darkness.

Bath isn’t alone in having a fine collection of curses: they turn up all over the Roman empire. There are attempts to silence witnesses, to sabotage racehorses, and to crush business competitors and love rivals. Most of the Bath curses, though, seem to be about thefts from the bath-house, although one poor chap had his house burgled. The crimes must have been very annoying for the victims, but as a writer looking to set a murder mystery in Aquae Sulis, I have to say there wasn’t as much instant plot in them as I’d hoped.

Even the apparent kidnap of Vilbia might have been less dramatic than it seems. Roger Tomlin, the modern translator, points out that the word has never been found anywhere else. The stolen “vilbia” might simply be an inanimate object with a name that none of us now understands. But while Vilbia doesn’t provide a ready-made plot and cast of characters, the curses as a whole give a lively insight into a busy town and the everyday struggles of its people to thrive and survive. And perhaps of the wider divisions between them. 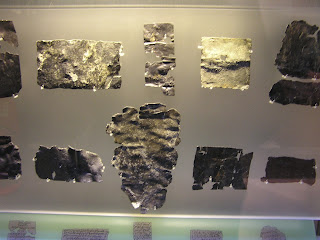 We know that Roman citizens lived in the town (some of their tombstones have turned up, proudly announcing the three-part names that show social superiority), but none of the curses has a citizen’s name on it. All the complainants and culprits seem to be either lower-class Latin-speakers or native Britons. That might be because, as Pliny put it, the Britons were enthusiastic practitioners of magic while all good Romans ought to look down their noses at it (yes, I am paraphrasing wildly here). It might also be because the poorer you were, the less chance you had of owning a slave who would guard your kit while you were bathing.

Even if you knew who’d done it, in the absence of a police force there wasn’t much you could do unless you had powerful friends or plenty of cash. At a guess, Arminia had neither. She knew exactly who’d made off with her two silver coins – it was Verecundinus, son of Terentius - but getting them back had to be left to the goddess. 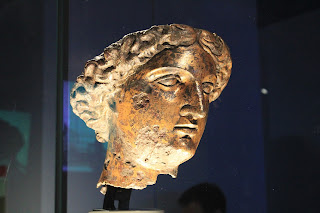 Did Verecundinus pay up? Or did he suffer the punishment of being unable to sit, lie down, walk or sleep? We don’t know. For us, at least, none of these cold cases is resolved. But people believed in the curses enough to carry on throwing them into the spring for over two hundred years. There might have been no police officers to investigate crime, but even while you slept, that lump of lead hidden under the steaming surface of Sulis Minerva’s waters could be working its revenge on your enemies. And that must have felt good.

Roger Tomlin’s work on the Aquae Sulis curses - from which much of this information is drawn - can be found in The Temple of Sulis Minerva at Bath, Vol 2: The Finds from the Sacred Spring – Barry Cunliffe et al – OUCA Monograph no 16, 1988

Read more about the site at https://www.romanbaths.co.uk/