PETERLOO - a place, a time and a film. By Penny Dolan

Some time ago, visiting Manchester for the first time, I “discovered” what seemed an impressive square. An enormous Victorian gothic building dominated the site but, even so, I did wonder why such a large expanse of rain-puddled pavement was – well, there.
My A-Z map book gave the name as St Peter’s Square; a small plaque on the wall informed me the area was once an open space known as St Peter’s Field where gatherings and public meetings had traditionally been held.

For a moment, I thought of similar places in London that I knew: Speaker’s Corner at Hyde Park, and a green space out at Hampstead and, opposite Wood Green Tube Station, Spouters Corner, a patch of tarmac where, at weekends,  speakers stood with their placards, promoting vegetarianism, the rights of workers or eastern philosophy, often accompanied by the Salvation Army band, preacher and rattling tins. Occasionally, if one was lucky, there might be a man with novelties in a suitcase, or a three-cup trickster or a half-naked escapologist . . .

However, I was now standing in Manchester, staring at a rather jokey-sounding word for the first time: Peterloo. Remembering, I feel ashamed of my  ignorance then because the incident was not amusing at all. Peterloo was a vicious attack on a public gathering of our own people on that very site. 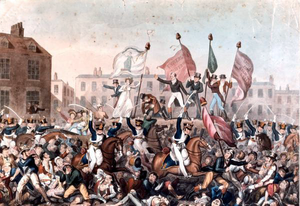 The year was 1819.  The date was the 16th August. The sky was blue, the sun was shining and a large crowd of Manchester’s working people, dressed in their respectable Sunday best, had gathered in St Peter’s Field.

It was an uncertain time, Although Napoleon was now defeated, the early nineteenth century so far had been a period of worrying unrest. In 1813, a few years before, the British Prime Minister, Spencer Perceval, had been assassinated. The new manufactories had problems with machine-breakers, and the restrictive Corn Laws had brought widespread poverty, hardship and famine across the land.

The people wanted their grievances heard and they wanted representation, but for many the question was “How?” Parliament no longer reflected the distribution of the increased population and was mired in the scandal of the “Rotten Boroughs”, a situation where even men wealthy enough to have a vote had no Member of Parliament to represent their wishes.

The North suffered badly under this system. For example, the whole county of Lancashire, with its growing industrial towns and increased number of inhabitants, had only two MPs. At the other extreme, the one, single enfranchised voter living in the small, now-decayed borough of Old Sarum could elect two whole MPS’s to represent his views. Many felt this as a growing injustice.

All of this was why, on that sunny day in August, a mix of grievances and curiosity brought people from all around Manchester to St Peter’s Field. They wanted to hear the words of a well-known Radical orator, Henry Hunt, who the members of the Manchester Patriotic Union Society had invited to speak on the topic of parliamentary reform.

The local magistrates, wary of Hunt and what might become an unruly mob,, had arranged for soldiers to be in town. Clearly they wanted to be very sure there would be no civil unrest:  they had called up 4 squadrons (600 men) of the 15th Hussars; several hundred Infantry; the Cheshire Yeoman Cavalry; a detachment of the Royal Horse Artillery, two six-pounder guns, the Manchester Yeoman and six hundred special constables.

William Hulton, the Chief Magistrate and others watched St Peters Field from the window of a nearby house. Although there was no trouble at all, the crowd kept growing. Finally, when Hulton estimated there were 50,000 attending, he sent his local officials and 400 special constables into the moving crowd to clear a wide path through to where Hunt would be speaking and then sent in soldiers to arrest Hunt. The inevitable happened: faced by a hostile, uncertain, milling crowd, the cavalry galloped in with raised sabres, attacking people as they tried to escape the onslaught. By the end of the day, eleven people were killed, including a baby-in-arms, around five hundred men and women were injured and maybe more who would not seek public aid for injuries for fear of further trouble.

As reports of the St Peter’s Field’s massacre spread, many radical thinkers wrote letters and articles condemning the slaughter and questioning the actions of the Magistrates and the military. It was during this furore that the name “Peterloo” was given to this incident: a mocking, bitterly satirical reference to the victorious cavalry charges during the Battle of Waterloo three years before.

However, constantly afraid of real civic revolution, the Government backed the actions of the Magistrates and cracked down on anyone involved in such groups. Soon, under Lord Liverpool, Parliament imposed what became known as the Six Acts.

As a result of these new laws:
-         training in arms and drilling was forbidden


-         presses were restricted in what they could publish.
And so the battle for representation and suffrage continued, well into the twentieth century.

Peterloo, it seems to me, was an act of hope but it was not the victory that the people hoped for, not then. Yet it was not an insignificant event and, as I write this post, there are aspects of this story that feel far too relevant. (Even at a simple level, was one of those acts why the British people do not normally carry guns?)

This brings another question into my head. As my Manchester introduction demonstrated, “Peterloo” was not an event I had ever been taught about. My own, long-ago Social and Economic History course swept over this specific people’s gathering, losing it among tales of come-by-night Luddites, the machinery of Industrial Revolution and the various Factory Acts.

Puzzled, I asked friends with children at secondary school right now about this matter – thank you! -  but I am still not sure of the result.

Peterloo is not, I think,  specifically included within National Curriculum Key Stage Three History topics (ie in lower secondary school classes, when history is compulsory). And then, post-Options, Peterloo may well depend on exam boards & teachers including the incident within their own particular syllabus. Is it ever raised in schools in a significant way now? If so do let me know.

It surely should and will, because Peterloo is about to be better known. Next year - 2019 - is the two hundredth anniversary of the massacre, so there should be plenty of commemorative events and media attention, particularly from the Guardian newspaper whose roots lie in that same radical Manchester ground. And, before that, on 3rd November 2018, something else is happening too.

The film-maker Mike Leigh will be releasing his long-awaited project:

Although the History Girls blog is about historical fiction, especially novels, I really needed to mention the film here. Why? Just so people will know it is out there.

The great big Christmas circus of films about to descend on multiplexes everywhere with Winter season blockbusters filling every screen from Fireworks Night through to New Year, so you may need to look very hard to find the far-less-festive bread of "Peterloo".

I suspect it is the kind of film that may well appear fleetingly, at “selected screens only” and am not sure how the general distribution will work out. There’s no evidence – yet - of Mike Leigh's film appearing at my local Odeon, but I have spotted that "Peterloo" is scheduled for a single noonday showing on Saturday 3rd November at City Screen York.

So, if you want to see Peterloo, and the interpretation that Mike Leigh brings to his film, start studying your arts cinema venues now. Here's the trailer:


After the event, the poet Percy Bysshe Shelley, who had been in Italy at the time, wrote his famous poem The Masque of Anarchy, which includes these lines, and unknowingly, a by-line for the film:


Which in sleep had fallen on you -

An important, if harrowing, moment that doesn't get the attention it deserves - thanks for this, Penny!

We certainly covered this in our history lessons in the 60s, together with Luddites, Factory Acts, etc. I had assumed it was as generally well known as they were.

I learned about Peterloo at school too, in about 1971 -- but nonetheless, cracking post, Penny. Peterloo should be remembered and taught.

And, reading your post, I, too, kept thinking: this is very like the situation today. Despite 'reform' we STILL have an unrepresentative, easily manipulated voting system. We have a media that mostly works for the Tory millionaires that own it. We have a Police force that is refusing to investigate electoral fraud

As my partner's (Scottish) brother said to me, explaining why he was SNP and voting for independence: "We're sick to the back teeth of voting Labour and being ruled by Tories."
And my god, the scum that has currently risen to the top in that party!

Rather amused to see a photo of Maxine Peake, who appears in the film, heading a prominent "Peterloo" piece on the front of today's Guardian. And there I am complaining . . .

I am glad to hear that Peterloo is or was taught in schools. There seem to be so many non-statutory examples that teachers can choose to teach that choosing the right scheme of work for your pupils must take some talking through.

Sue, the more I read about this event and the context and after-effects, the more those comparisons shouted aloud.

And now with the correct trailer too!

Great! Thanks for drawing our attention to this. An important event - and looks like a great film too.

I knew about it - from a novel, I think, but I don't remember which one. Thanks, Penny - interesting and horrifying.

I knew about the sabre attack, and that it was unjust and hugely significant, but not why. Another part of our history that deserves to be known better. Thank you Penny!

Brilliant! Thanks, Penny. I'm really looking forward to the film too. I live very near Manchester and really enjoy the rich history around here- including the ideas and politics of the fine artists, especially women who were involved in the suffrage movement xxxx