The Etiquette of Apples


I have been lucky enough to be given a huge plastic bag full of apples from my friend's orchard, and have been busy cooking up stewed apples and freezing them, so I can enjoy them through the winter. Whilst looking up different recipes I cam across snippets of applelore, which I hope will give you a taste of apples and of Autumn.

The Latin malus means both “apple” and “evil,” which, according to some historians, is probably why the apple gained a reputation as the Forbidden Fruit, when most scholars agree the original fruit was probably a pomegranate, though Michelangelo’s Temptation and Fall on the ceiling of the Sistine Chapel features forbidden figs. By the 17th century, the apple being the commonest fruit in Europe, the fruit responsible for man's Fall from Grace was widely believed to be the apple.


The first evidence of deliberate cultivation dates from the period of the Roman invasion of Britain, but by the 9th century records show that cider making was already well established, and the Norman French brought with them a number of new varieties of apple, including the Costard. This apple is no longer grown, but its existence is preserved in the word costermonger -- a seller of Costard apples.

In North America nearly everyone has heard of 'Johnny Appleseed'. During the late 18th Century he planted orchards right from Pennsylvania in the east through to Indiana in the west. According to legend, the indigenous population regarded him as a medicine man, because of his combination of enthusaism for nature and his religious devotion, which involved distributing tracts along with the seeds. 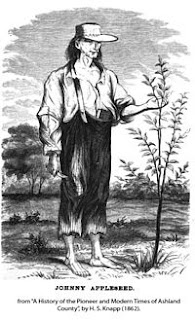 When eating apples at the table or in company, a range of 'apple etiquettes' became common. In Georgian times, coring the apple was done with a silver apple corer. When they first appeared in the 1680’s they were a long silver cylinder, with a scallop shaped cutting blade. Some rare examples have a hollow compartment at one end in which sugar, cinnamon and other spices to add flavour would have been kept. Gentlemen carried these, as it was fashionable for the genmtleman to assist the lady, and peel and core the fruit for her. Some had a handle that unscrewed, so the device could be stored in a pocket more easily. Apple corers in this form were popular until about 1820.

Fruit was widely used as a dessert and special cutlery was used in the Victorian era to eat it. When fresh fruit was served, a small plate accompanied by a fruit knife and fork were exchanged for the dessert plate.

Above is a Victorian mother of pearl handled pocket fruit knife and fork, each with its own little leather carrying case.

There is a knack to peeling the fruit elegantly in polite company. Holding the fruit by the fork, the apple is stood straight up and peeled from top to bottom without being touched by the hands. When the entire fruit has been peeled, it should be carefully sliced into small morsels and eaten one piece at a time. I should think many people found their apple shooting unexpectedly across the table!

For more information on how to eat fruit correctly with or without cutlery, (including bananas and all sorts of other fruit) I recommend you go here. Of course I can't imagine many of us will feel the need for such extreme etiquette, but it is fascinating!

Find my books at www.deborahswift.com
or follow me on @swiftstory

I had no idea there was once special cutlery for fruit. How interesting.