I've done a lot of crazy things in cars on the terraferma of the Veneto. It always seems to go wrong. Some might say that I'm better off never leaving Venice. This post feels like a continuation of Not the Villa Pisani at Stra, in which your correspondent swotted up on said stately home only to be delivered to a completely different Villa Pisani.

This time I thought I'd done my homework properly. I'm currently on the trail of the historic trade route that brings dried cod from the Lofoten island of Røst all the way to Venice. I have written previously about the slightly salty start to the six-hundred-year-old relationship between the fishermen of Norway and the diners of la Serenissima. It started with a shipwreck in 1431 and the cod-lines have never been broken since then. But lately ‘stoccafisso’ or cod has become a talismanic plot device in my WIP. Venetian revolutionaries known as 'Carbonari' will use it when fermenting some trouble for their Austrian occupiers in 1818.

At any Venetian bar or restaurant, you can to this day eat Baccalà mantecato (dried Norwegian cod soaked in water or milk and then whipped up to a fluffy paste with olive oil). And of course it was the two islands of Røst and Venice that set up the whole unlikely business. Surprisingly, however, the mother-lode of modern stoccafisso research in the Veneto turns out to be on dry land.

In 1987, the Confraternità della Baccalà alla Vicentina (cod served with polenta) was established in the small terraferma town of Sandrigo, half an hour’s drive from Bassano del Grappa. A partnership brought together gastronomists and local personalities who resolved to promote the baccalà that was, they feared, in the process of disappearing from the Veneto.

Two years later, the plans came into effect. September 30 and October 1 of 1989 saw the arrival of the first stockfish from the Lofoten Islands to be cooked by restaurants and served to the public in a Saturday night supper and a Sunday lunch in Sanrigo. On Saturday afternoon those involved paraded around the town, which was bedecked with Norwegian flags, a sight said to have moved the Norwegian Ambassador, whose countrymen had donated 5 quintals of stockfish for the occasion. Sandrigo welcomed 10,000 visitors that weekend, too many to be fed the main meal. Many had to settle for a pasta seasoned with a "tocio" of baccalà. And for the last thirty years the tradition has continued, each year enriched with new activities and festivities. Innovative dishes have been added to the repertoire. Now you can get gnocchi and risotto with baccalà, croquettes with baccalà and many other dishes. There is even, God help us, baccalà pizza. According to the website, the baccalà festival is now one of the biggest and most important in Italy. In 2017 the 10,000 kg of the fish were consumed, a record.

Relations with the Norwegians have strengthened: thanks also to land-bound Sandrigo twinning with the island of Røst and to the ever-increasing presence of Nordic guests and students who, in alternate years, come to visit Sandrigo.

Given my current research, I was of course keen to see the festival of the baccalà. So to Sandrigo recently, in a day of limpid sunshine, hoping to catch sight of the promised processions, the handsome (surely!) Norwegian fisherman, to taste the many dishes prepared for the occasion and to generally enjoy the sagra. (A sagra is a festival usually devoted to a local food of some kind. As nothing much grows in Venice, except cruise ships and tourist inundations, we are deprived of sagre. So it was especially piquant to feel that I was about to get a little involved in this one.)

Naturally, I did my research on the website of the Confraternità. September 27th was listed as one of the active days of the festival. Personally, I was hoping to meet some Røstians whom I could visit next year when I do the Norwegian part of my research. I had a million questions for them.

My little party was encouraged when the first thing we saw in Sandrigo was a banner over the road, welcoming us to Baccalà Country. 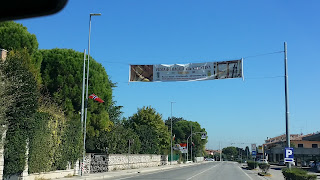 Then, with mounting excitement, we noted the Norwegian flags at every corner. At the excellent Sandrigo restaurant where we had lunch, wooden models of stoccafisso were piled in the window. We were told by our host that perhaps forty or fifty Norwegians were in town for the festival. He was curious too: ‘And why are you here, Signori?’

‘Siamo alla caccia di Pescatori Norvegesi’ we told our host. ‘We are on the hunt for Norwegian fishermen’. Under my breath, I added, ‘Tall, handsome ones!’

But … on making our way to the sports ground which is the epicentre of the festa, we found only empty seats … 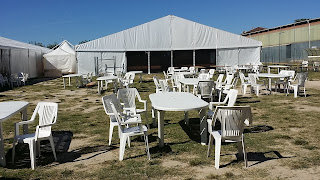 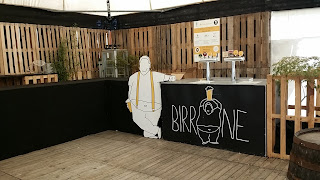 a huge pavilion set up for hundreds of dinners … 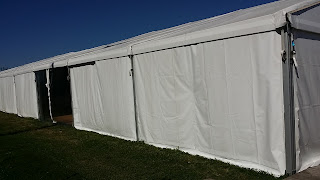 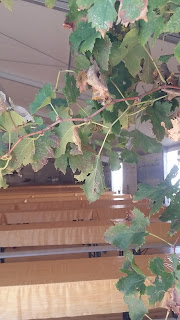 The only person we saw in the whole realm of the cod was a solitary man on a bicycle. 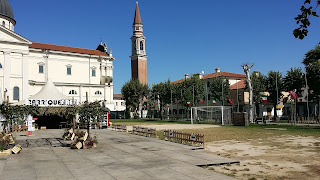 As for Norwegians, not a one, except painted on windows of pizzeria.
(I am assuming that the tall one with the red beard is a Pescatore Norvegese). 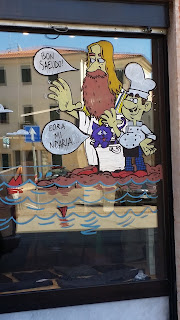 also, the ones below with the Viking horns … 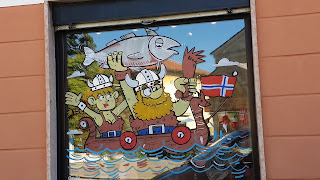 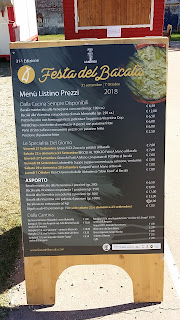 and even a picture promising cod pizza. 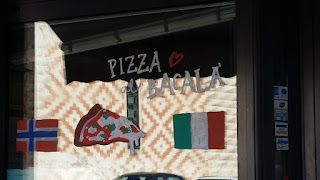 But no cod, except these wooden ones at our restaurant: 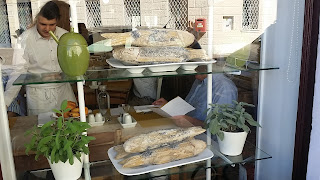 It turns out that I was misinformed about the true excitements of the sagra. We should have committed ourselves properly to the cod and made a weekend of it.

We had already missed the previous Saturday’s show: TIRACCHE MATTE PRESENTS THE CRAZY GIRAFFE - a duo of jugglers grappling with the objects of everyday life. And Sunday’s Mediaeval Show with waders (?) and jesters.

Just two days after our visit, Saturday 29 September was to be one of the highlights, with pavilions of foods, tastings, and a Magic Night with street arts, including fakirs, tightrope walkers and fire-eaters, all accompanied by live music. And on the morning of Sunday, September 30th there’d be the Investiture ceremony of the Confraternità of the Baccalà in the presence of the Norwegian delegation from Rost, with flag-raising - national anthems and performances by the drummers of Conegliano Veneto and the flag-wavers of the Cerva di Noale, historical costumes, a parade of the Food and Wine Confraternities and of the Baccalà Club, followed by more live music and street shows. Monday 1 October was to be the GRAN FINALE, with the specialty of RISOTTO DI GRUMOLO DELLE ABADESSE … with baccalà. Since the 16th century, rice is a speciality of the small hamlet of Grumolo delle Abbadesse, between Vicenza and Padua. It was introduced to the area by nuns ('abbadesse') from the Benedictine abbey of San Pietro di Vicenza.

But by Monday October 1, I was long gone, sadly. I was back in London, having scored a comprehensive fail on my cod research. However, I do not count my golden day in Sandrigo as wasted. I could not have wished for more hilarious and sympathetic companions. I’d never been to Sandrigo before. We were shown inside the lovely Villa Sesso Bourdignan by its kind owners, who now live in the part of the building that was the original post office, being the home of the carrier pigeons who used to deliver the mail.

We also got to press our noses against the gates of this villa and glimpse its frescoes through a cracked keyhole. 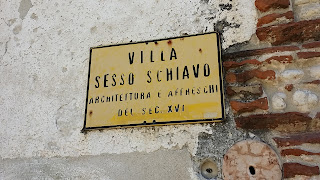 Those of you who speak Italian, will know that its name translates as ‘Villa Sex Slave'. But in fact the ‘Sesso’ is a family name (We had earlier seen the villa of Camillo Sesso) and Schiavo is a locality. (Still!)

But sadly, now I am back in London, writing this. I’ll hope for better luck in Røst next June, where a Puffin Festival is promised … maybe … if I can get the day right … perhaps ...

I am thrilled to have found your blog via Vicky Bennison of Pasta Grannies....yesterday. I loved reading about your cod research and really appreciate your enthusiasm. I am glad to have all your past entries to delve into.

Oh, this made me smile! Good luck with the hunt for handsome Norwegian fishermen when you go to Norway - surely you'll find some there...?