Crossing the Alps by Miranda Miller

While researching my current novel, which is set in 18th snd early 19th century Rome, I came across some interesting descriptions of how it was to cross the Alps before there were any railways. Crossing them on a train is still a memorable experience but our tourism is a very feeble experience compared to theirs. Most Grand Tourists had to cross the mountains to reach Italy, and a young man was not considered truly educated and civilised until he had experienced the wonders of Italian art and architecture.

Crossing the Alps usually took eight days. There were no coach roads through the Alps until the end of the eighteenth century and so, to cross the Alps, your entire coach had to be disassembled and carried over the mountains on mule back. The Mount Cenis pass, on the route from Lyons to Turin, was the most travelled route into Italy during the heyday of the Grand Tour. Tourists were carried over the mountains by Swiss chairmen in a sort of open sedan chair. 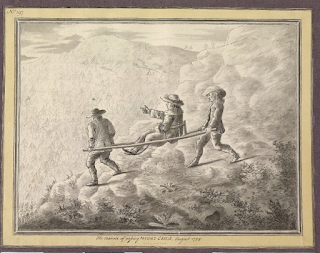 Miss Wilmot, one of the rare women to make the Grand Tour, reported that the Swiss chair carriers were happy men who burst into song as they approached Alpine villages. Some tourists had the thrill of sledding down a steep slope. When you reached Turin your carriage was reassembled. In 1775, “Mr. Greville drove his phaeton up the St. Gotthard, to every one’s amazement.”

The mountains themselves inspired an awe that, perhaps, only mountaineers can know nowadays.The English journalist Joseph Addison described the Alps as this “awful and tremendous amphitheatre,” while the poet Thomas Gray said that Mt. Cenis carried “the permission mountains have of being frightful rather too far.” One route was the St. Gotthard Pass and its “Valley of Trembling,” which gave the name tremolite to a mineral found in its granite walls.

Scientists, as well as rich young men, were fascinated by the terrifying mountains. Johann Jacob Scheuchzer, an 18th century Swiss botanist and mineralogist who was a Fellow of the Royal Society of London, made nine journeys in the Alps. As well as recording the elevations of mountains he included several reports of dragon sightings in his Itinera Alpina (1723). Although Scheuchzer dismissed some of these tales as fabulous, he concluded that “from the accounts of Swiss dragons and their comparison with those of other lands...it is clear that such animals really do exist.”

In the early 19th century the Romantics found mountains endlessly - well, romantic. In Book VI of The Prelude Wordsworth describes crossing the Simplon Pass on foot as a young man of twenty:


Imagination—here the Power so called

Through sad incompetence of human speech,

That awful Power rose from the mind’s abyss

Like an unfathered vapour that enwraps,
At once, some lonely traveller. I was lost;

Halted without an effort to break through;
But to my conscious soul I now can say—
“I recognise thy glory:” in such strength
Of usurpation, when the light of sense
Goes out, but with a flash that has revealed
The invisible world,

An invisible world, heroism, the sublime.... these ideas, even more than the physical danger and discomfort, caught the imagination of a whole generation. Schiller popularized the legend of a medieval Swiss hero, a freedom fighter of the mountains, in his play William Tell ( 1804).

In his long poem Manfred Byron’s alter ego gazes in wonder at the Jungfrau and Eiger mountains:
“Heard avalanches falling every five minutes nearly – as if God was pelting the Devil down from Heaven with snow balls... clouds rose from the opposite valley curling up perpendicular precipices – like the foam of the Ocean of Hell during a Springtide.” 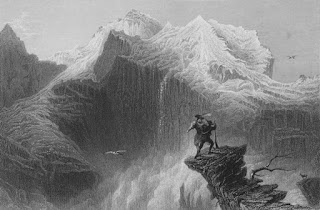 Here is Manfred, looking particularly Byronic, about to be blown off the Jungfrau. Byron’s poem was later set to music by Tchaikovsky. Byron, like many passionate nature lovers, didn’t think much of his fellow human beings: “Switzerland is a curst selfish, swinish country of brutes, placed in the most romantic region of the world. I never could bear the inhabitants, and still less their English visitors,” he wrote to Thomas Moore in 1821.

Napoleon planned to launch a surprise assault on the Austrian army and in May 1800 he and his army of more than 40,000 men spent five days crossing the St Bernard Pass. Napoleon’s military tactic was successful and resulted in his victory at Marengo. 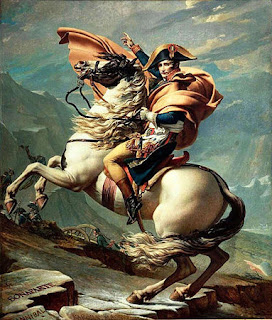 Here is David’s great propaganda portrait of a dashing young hero on a white stallion leading his army over the mountains. Napoleon did not actually lead his troops over the Alps at all but followed a couple of days after them, travelling on a narrow path on the back of an unpicturesque mule. Napoleon refused to sit for this portrait : “Nobody knows if the portraits of the great men resemble them, it is enough that their genius lives there.” One of David’s sons stood in for him, dressed up in the uniform Napoleon had worn at Marengo, perched on top of a ladder. Napoleon, acutely aware of the power of symbolism, insisted on an equestrian portrait.

Like everybody else in Europe, Turner was fascinated by Napoleon. He had not yet been to Italy in 1812 when he painted Snow Storm: Hannibal and his Army Crossing the Alps.

Another great warrior, Hannibal, is leading his armies over the mountains to attack Italy. For Turner there were obvious connections between the two men,  also between the Punic War between Rome and Carthage and the Napoleonic wars that were then raging between Britain and France. He had seen David’s heroic painting of Napoleon during a visit to Paris in 1802.

By 1818 Mr. B. Emery, of Charing Cross London, was organizing stagecoach tours of Switzerland. Hikers, mountaineers and honeymoon couples began to cross the Alps and it all became rather less sublime.
Posted by Miranda Miller at 01:00

I should like to know the amount of traffic passing through the Alps before rail and established roads. Was this a relatively solitary journey (one's own party), or did one meet and pass fellow travelers, making it more of a jolly occasion?

Also the mention of dragons in the 1700's is interesting!