We have just returned from a few days in Lucca, a walled mediaeval city in Tuscany - and my post is due for tomorrow; so it's going to be something of an extended postcard! Looking out today at the wind and rain and banks of cloud, I certainly wish I was there again, enjoying the sunlit squares, the narrow streets, the beautiful city walls...

Those walls. Everyone I'd spoken to who'd been to Lucca had said that walking the wall was a must, and they were absolutely right. Lucca was a Roman town - the streets are still laid out in a Roman grid pattern, and it's easy to trace where the forum was, and the amphitheatre (more of that later). It was the Romans who built the wall, and it's testament to their extraordinary engineering skill. It's massive: a steep bank, wide enough on top for a road with a verge on either side, planted now with trees which last week provided welcome shade, though their leaves were starting to flutter down like gleaming copper pennies. There are numerous gates to allow access into the city, and people stroll, cycle and run on top, with the mountains on one side and the towers and domes of the city on the other. It was easy to imagine carriages rolling along, and ladies and gentlemen on horseback, exchanging greetings, making assignations...


I'm not someone who's sensitive to ghostly presences. But just as on the wall I could imagine people from the 18th and 19th centuries, in the streets at night, quiet, lit by lamps which cast soft shadows, it was easy to sense the presence of earlier inhabitants: silk and velvet skirts sweeping the paving stones, smiles and laughter, secrets shared, promises made. We went to one museum which really helped to make that older time come to life: called the Palazzo Mansi, it was partly the house of wealthy merchants as it had been and still was, and partly the home of the city's art collection. One of the most extraordinary things there was this ceiling: centuries old, but the colours as fresh and light and clear as if it had been painted yesterday, instead of to celebrate a long-ago wedding. It was so cleverly done that it was really difficult to discern what was really three-dimensional ad what just gave the impression that it was. (A word of warning, though, if you ever go: mysteriously, you can only get into the museum at certain times of day, and it's not easy to spot. As a result, it's very uncrowded!)


There are of course lots of churches. The cathedral, San Martino, has a number of features which particularly intrigued me. One was this marble statue of Illaria del Caretto, who died in 1405 at the age of 26, after giving birth to her second child. She was the second wife of Paolo Guinigi, the Duke of Lucca - and not the last. This sarcophagus was commissioned by her husband, but she was laid to rest elsewhere, not inside it.


She's so beautiful, so young. Her husband was later deposed by the people as a tyrant. Quite unfairly, perhaps - apparently the Duke grieved greatly (though that didn't stop him remarrying soon after) - I was reminded of Browning's poem, My Last Duchess, which is an immensely skillful and chilling monologue by the Duke of Ferrara, during which he gradually, 'inadvertently' reveals that he had his wife killed out of jealousy. I gave commands/ Then all smiles stopped together. There she stands/ As if alive. 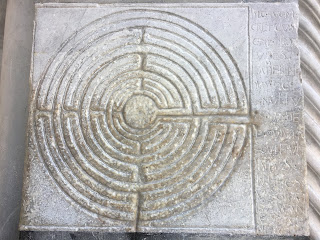 Another thing was this, which is carved on quite a small stone on the outside of the building. I thought it was a maze, but discovered on looking it up that it's a labyrinth. I was struck by the difference - that with a maze, you try to reach the centre: with a labyrinth, you try to get out. Not sure why that seems significant, but it does. I'd like to know more about the script chiselled into the stone on the right: mediaeval graffiti, or a commentary of some kind by the artist? It's quite difficult to see. 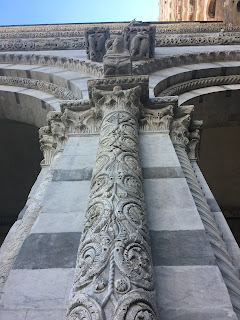 And this picture is specially for Mary Hoffman. She mentioned that she particularly liked the pillars of the churches in Lucca. I hadn't even noticed them, but because of her comment, I looked again, and saw these beautiful, intricate carvings.

There are so many other things I was going to write about, but this post is already quite long enough. So I'll end with a picture which isn't of Lucca at all. It's of Viareggio, where we spent a glorious day on the beach. (Unbelievably, only three days ago...) It's a long time since I saw Death In Venice, but it made me think of the scene at the beginning, where the protagonist first sees the beautiful boy with his family on the beach. Except that it wasn't in Venice, and fortunately, nobody died... 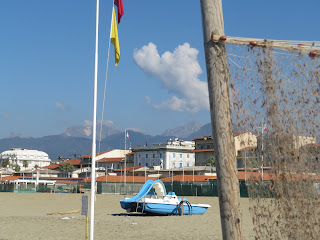 Thanks for this, Sue - so gorgeous!

Thanks, Sue! Lovely post and gorgeous pictures. Got to go!

You make me want to return and notice the things you mentioned and I missed. Love walking the wall.