French view of the First World War by Janie Hampton 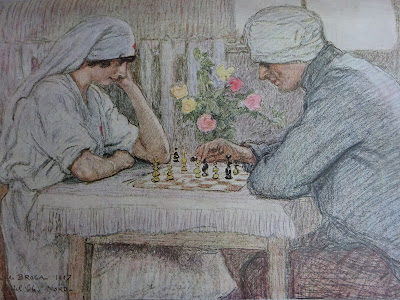 During the last four years we have seen the First World War from many angles. But how did the French see it? A few years ago I found two large-format bound volumes of the magazine L’Illustration in the street with a notice ‘Take Me’. Being an obedient citizen, I did. And then wondered what to do with them. Now I am glad I did not throw them out.  My school French can read the titles and the subject matter but not the detail. So I share with you some of the 100s of illustrations, drawn and photographed.


L’Illustration dealt with subjects other than war, including the dangers of high heels (with X-Rays of damaged ankles to prove it); how to bottle apples; and the Russian Revolution (the editor of L’Illustration did not seem to like the Bolsheviks). In December 1918, advertisements reappeared on the back page.
www.janiehampton.co.uk
Posted by Janie Hampton at 00:30

Is no one monitoring the comments on this blog? It is sad that Janie Hampton went to so much trouble to make this post for it to be trashed by people who seem to have no interest in the subject of the Blog.

Dealt with it, Toffeapple, and thankyou for pointing it out.

Thank you for sorting it out Katherine, it was a shame to think that Janie's work was not appreciated.