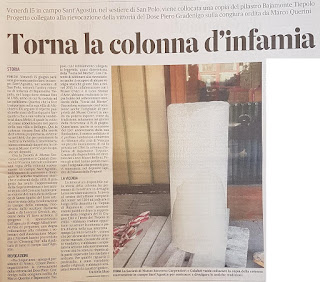 Venice is taking a small stand against all the Disneyfication, cruisification and forgetting of the last decade. A small piece of her history is … we hope … about to be restored to her: a column of infamy.

I have written previously of my own long campaign to restore this fascinating and important relic of Venice’s early modern history. Not many cities have seven hundredth anniversaries. But Venice has: that of the conspiracy of Baiamonte Tiepolo in 1310, an event that led to the formation of the game-changing Council of Ten, which ruled Venice for the next four-and-a-half centuries.

In my innocence, thought it would be an excellent idea to resurrect that column for the 2010 anniversary. Venice’s bureaucracy disagreed. Now, where I failed eight years ago, others have at last succeeded.

The restored column is a replica. It’s taken over five years to produce and get permission to put it in the campo of Sant’Agostin, the place where the original column stood as a warning to anyone else who might think of murdering the Doge and setting up a new kind of state.

The original column has not been lost. It still languishes in the ‘deposito lapidario’ of the Palazzo Ducale, and for reasons best known to themselves, the Venetian Musei Civici are keeping it down there. They have at last included the column in their online register of  works. Catalogue entry Cl. XXV n. 0984 includes two photographs. This is certainly an advance on the tragicomical vacuum of information I found when I was hunting for the column all those years ago. 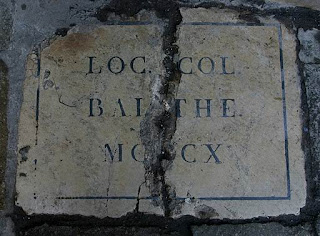 Nor is the replica column returning to the site of the original. For years, that spot has been marked by a dirty, broken and hardly explicit stone slab (above), making it seem as if the city were ashamed of what it had – or what it had lost – in the column of infamy.

The replica column is to be placed closer to the centre of the campo, near the well-head.

The Soprintendenza dei Beni Culturali has finally approved the new sculpture. However, apart from that intervention, it appears that the re-erection of the column is an entirely citizen-generated and privately funded exercise.

Venice is indebted to Andrea Bizio Gradenigo and the Societa’ di Mutuo Soccorso Carpentieri e Calafati. The work has been executed by the sculptor Riccardo Gatti with the help of Lorenzo Gersich, a student at the liceo artistico at Santo Spirito. The project is sponsored by a travel agent, Albatravel. To celebrate properly, the campo of Sant’Agostin was to a full cleaning at the hands of the Associazione Masegni e Nizoleti. All credit to everyone involved. And the column was supposed to be put in place on the anniversary of the conspiracy, which famously took place on Saint Vito’s day, June 15th, in 1310. It would have made an enormous difference to those of us who care about Venetian history and the column to let that happen.

Unfortunately, to the very last minute, Venetian bureaucrats seem to have shown a Irish-style begrudgery towards this column that their indifference finally could not keep hidden. I should not have been surprised. Despite all the best-laid plans of the above-mentioned citizens, bureaucratic delays have meant that the replica has still not reached the Campo Sant-Agostin.

Added to the bureaucracratic imbroglio there was apparently a Comune architect or engineer who was poorly and some other functionary who went on holiday at a crucial moment. I'm sure I wish them a speedy recovery and a lovely break respectively.

For the last six months, I have been hoping to bring news of the column’s placement. And hoping. And waiting. And fuming.

Meanwhile … back at the London loft … Some time ago, in this place, I wrote a very emotional post about the demolition of a Victorian tier gate belonging to the charming building that was once ‘Mr Roots Horse Hospital’. Now known as Blows Yard, it nestles by London’s Borough Market. The unpunished amputation of the column was a clear sign to me, and many people who wrote in, that something is not well, conservation-wise, in the Borough of Southwark.

Ever since then, the site has been shrouded in hoarding. The hoarding has recently come off, revealing that the mate of the lamented column has also been done away with too.

Michelle Lovric's website
For those of you looking forward to Joan Lennon's latest piece, normally scheduled for the 5th of the month - she will post on the 10th, and this special post is well worth waiting for!