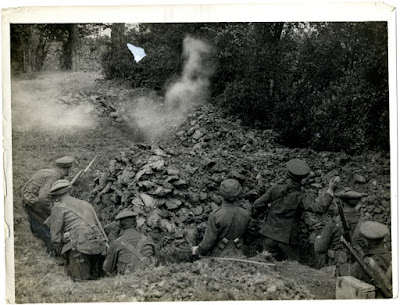 In WW1, the use of weapons such as grenades, flamethrowers and howitzers meant that war was waged on a vicious industrial scale. Those lucky enough to survive their injuries were often maimed or facially disfigured and returned to ‘Blighty’ both physically and emotionally scarred.

My own great grandfather, who suffered a terrible head wound that required a trepanning operation, was greatly affected by his injury. The metal plate that covered the hole in his skull caused agonising headaches and he became irascible and depressed. Like many returning soldiers, he found it difficult to adapt once more to civilian life. He couldn’t work; his life could not be as it had been before the war. He had seen and experienced too much. He no longer felt like the same person.

This sense of lost identity, felt by many returning soldiers, was a subject I wanted to explore in my book ‘The Moon Field’. I chose to write about facial disfigurement in particular - what the French called ‘gueules cassées'  – broken faces. What could be more apt as a symbol of lost identity than the loss of one’s own familiar face? 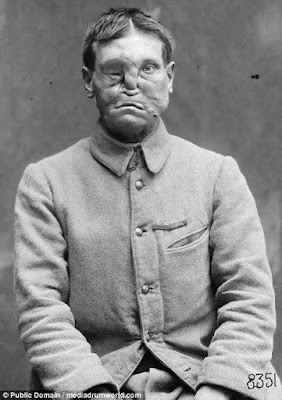 The public treatment of these war veterans was mixed. In parks, benches were set aside for disfigured soldiers and painted blue so that other people could avoid them. Whilst this may have been a well-intentioned effort to give the men some privacy, it also isolated them further, making them feel as if they were monsters. In my research I came across references to them as ‘droolers’ and stories of job vacancies swiftly withdrawn, café owners ushering the men to seats well away from the windows and even the throwing of stones. In my novel, the character with the broken face retreats to a ‘back room’ job as a cinema projectionist, withdrawing to the safe cocoon of darkness. It was my task, as writer, to take him on a journey back to the light.

At the start of the war, before the invention of the techniques that became the forerunners of modern plastic surgery, disfigured men were fitted for masks. The hospital units concerned became known, with gallows humour, as ‘the tin noses shop’. The metal masks could be taken on and off, with arms that fitted over the ears as with spectacles but which were also fixed securely at the back of the head with a wire fastening. 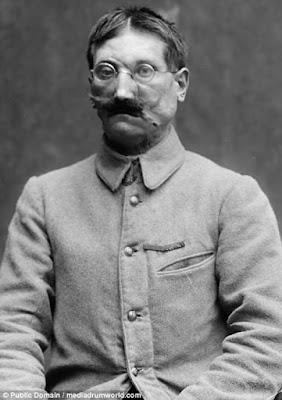 Men and women, who had been genteel sculptors who carved statues and fountains before the war, became instead shapers of men’s faces. One such, Anna Coleman Ladd, in a startling juxtaposition of the two worlds, described the galvanised copper of a mask as being ‘as thin as a visiting card’. They took enormous care to make the masks realistic: real hairs were laid on one at a time to make the eyebrows; the man’s skin tones were matched as nearly as possible and even a slight blue was added to replicate the effect of a ‘five o’clock shadow’.

Making a mask began with laying bandages soaked in plaster across the face to make a cast. Holes were left at the nostrils for the patient to breathe through but nonetheless it was a rather suffocating experience that had to be carefully timed, as the plaster became hot as it dried. A clay ‘squeeze’ would then be taken from the cast and the sculptor would copy the ‘good’ side of the face to create a mirror image, so that the mask modelled on it would restore the symmetry of the face. 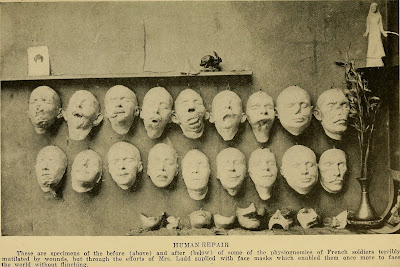 For men who had been so badly disfigured that they experienced people recoiling from them, sometimes even their own children running from them in fear, having a mask could return to them some dignity. Despite the fact that their expression was inevitably fixed and ‘doll-like’, being able to show the world a recognisably human face meant that they had the freedom to go out in public again. I found it heartbreakingly poignant to read the words of a grateful patient, in a letter sent to Mrs Ladd: ‘My wife no longer finds me an object of revulsion, as she had every right to do’.

Some men who wore masks were able to return gradually to a more socially integrated life, particularly when supported by close family. Others seemed to create new ‘families’ through congregating with others who had been similarly damaged: a community was set up in France by the Union des Blessés de la Face (the Union of the Facially Wounded) where disfigured men turned away from the outside world and lived and farmed together. At last, new identities were forged and the men often felt that their mask became so much a part of them that they asked, in their wills, to be buried in them.

Holy cow... this post really packs a punch. Those poor guys not only carried the interior destruction that many soldiers have to carry with them, but their outer appearance made it impossible for them to blend in with the crowd and find some solace among people.

I first came across this post-war mask phenomenon when I saw Jack Huston's character, Richard Harrow, wearing one on the series "Boardwalk Empire". He played the part with sensitivity and a kind of broken beauty that really touched my heart.

There is a story of Union des Blessés de la Face which may be true, or may be allegory...

In that community lived men who felt they no longer belonged in the outside world. As all were regarded as abnormal by those who regarded themselves as normal, the men, surrounded by others similar, were each accepted within their community. In time wives with more love than judgment joined some of these men, and one day a child was born. This child - a boy - lived among the men and women of the community, learning men and women appear different, some men wear masks while no women do, and that is how the world is. Perhaps one day, when he is older, he will also wear a mask. Is that not one thing that defines a man?

A brother of one of the wounded men came for a visit. In the community was a pool where the men often swam after a day of work, removing all - even their masks - as when one lives with one's greatest tragedy known to all, what more is there to hide? The brother of the wounded soldier - himself intact - joined the men in their swim. For the first time, the boy saw a man whose face was as smooth and clean as that of a woman; who held a nose, and a mouth, and a chin like those of a child; who had two eyes; who did not wear a mask. The boy ran to his father in panic, crying to be protected from the monster that had come into their midst.

Fascinating and so sad. Louisa Young, who used to be a History Girl, has written about this topic too - if you do a search for her posts, you should find them.

Yes indeed and Louisa's novel, My Sear, I wanted to tell you is about this too.