From the glitz and yachts of Cannes it’s a fifteen minute boat ride to the tiny, idyllic island of St Honorat, one of the astonishingly unspoilt Lerins islands. On a sunny afternoon in late October it was almost deserted and we walked around its coastline in about forty minutes; clean blue water and rocks on our left and, on the other side, vineyards, rosemary bushes, jasmine, olive and pine trees, all of which gave out a deliciously intoxicating perfume. No hotels, cars or bikes are allowed on the island. We passed a few small ruined buildings, a well restored fort and a World War Two gun emplacement before we came to a simple church surrounded by beautifully tended gardens. There’s also a gourmet restaurant and a shop selling wine, liqueur and chocolate (at Côte d'Azur prices) made by the Cistercian monks who live in the monastery. There are now about thirty and we passed a few of them, dressed in cream and black robes and sandals, looking busy and healthy.

The vines in the centre of the island are protected from the salty sea air by a fringe of pine trees. A large colony of pheasants shares this romantic island with the monks and, apparently, eat many of the Chardonnay grapes used to make the monks’ famous wines.

The tourist brochures claim that monks have lived on this island since the 5th century but in fact there have been periods when they had to leave. St Honorat has had a turbulent history although it feels so sheltered and peaceful now.

The monastery was founded by Honoratus, the son of a Roman consul, who converted to Christianity as a young man and later became Archbishop of Arles. He intended to live as a hermit on his remote island but was soon joined by disciples. According to legend, the island wasn’t always so hospitable. When Honoratus first arrived, it was overgrown by a dense forest full of poisonous snakes and spiders. After Honoratus and the other monks finished building their first monastery a tidal wave hit the island, obligingly washing away all these obnoxious creatures but leaving the monks safe in their stone tower,. This had become "an immense monastery" by 427, according to a contemporary writer. Patrick, the patron saint of Ireland, is thought to have studied at the monastery in the fifth century. St Honorat is rather like Lyndisfarne, in that it became a great centre of religion and culture after the Roman Empire collapsed (but it has a much better climate).

The monks were constantly attacked by Saracen pirates and in about 732 many of the community, including the abbot, Saint Porcarius, were massacred. In medieval times, many pilgrims came to the island, attracted by its beauty and by La vie de Saint Honorat, a popular book by Raymond Féraud , who is variously described as both a monk and a troubadour.
The fortified monastery was magnificently restored by Viollet-le-Duc in the 19th century. For centuries the monks needed to defend themselves because their island was in an important strategic position. This tower was built over many centuries , beginning in 1073, as a place of refuge for the monks in case of sudden attack. Inside, there are cloisters and chapels. At the end of the 15th century, the monumental center of the abbey shifted to this Monastery Tower and later the upper floors were occupied by soldiers who came on the orders of the king to defend the coastline. 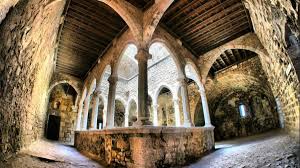 During the sixteenth and seventeenth centuries the island played an important role, in the wars between France and Spain. In 1635 St Honorat was captured by the Spanish and the monks were expelled but returned from exile two years later when the island was retaken by the French. The monastery continued to be attacked by the Spanish and the Genoese and the number of monks dwindled to four. One of the ruined buildings we passed on our walk was a Napoleonic oven used for heating cannon balls to a high temperature. 1707 the Lérins Islands were captured and occupied by the English navy, under the command of Sir Cloudesley Shovell.

After the French Revolution the church and monastery were deconsecrated and the island was sold to a wealthy actress from Paris,Mademoiselle de Sainval . She lived there for twenty years and is thought to have been a lover of the painter Fragonard, who lived in Grasse, up in the hills behind Cannes.
In 1859 the island was bought by the Bishop of Fréjus, who established the present religious community there. Between 1942 and 1945 the Fort was occupied by Italian soldiers, and then by the German army, who built the gun emplacements we passed on our walk. In 1993 the city of Cannes bought the Fort and made it possible to visit this stunning island.