I've recently been working on a novella for a collection of stories set in WW2. My book is set on Jersey in the Channel Islands. Those of you who have read The Guernsey Literary and Potato Peel Pie Society (or seen the film) will know about the food shortages on Guernsey during the German occupation. All the Channel Islands suffered under the occupation, not just Guernsey.  The geographical position of Jersey meant the Germans saw it as an ideal place of fortification before their planned invasion of England. 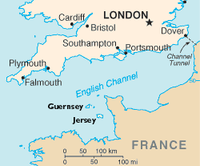 When the Germans invaded The Channel Islands, Jersey was cut off from English food supplies, and with thousands more hungry Germans on the island, the finding of enough food became a priority. Potatoes and swedes were a staple, but food was so scarce in the Channel Islands that every last morsel of the potato was eaten, including the peel. By the Summer of 1941, the ration of meat was four ounces per person per fortnight. Bread was scarce, and soon become a rough, hard, mouthful, often adulterated with bran, chaff or sawdust. The British 'cuppa' was made with tea recycled by drying out the leaves.

'The shops were empty, you couldn't buy anything. If you went into town, everyone was talking about food.'
Dorothy Blackwell - farmer's daughter Jersey


Finding and preparing food mostly fell to the women, and was enormously time-consuming. On an island as small as Jersey, the beaches were a source of food, though the beaches were mined by the occupying forces, so it was a dangerous mission to collect mussels or crabs. Seaweed, and moss were avidly collected, and used as vegetables or to make setting agents for preserves or blancmange.

Sugar was not available, so islanders made syrup from sugar beet. Coffee substitute was made from collecting and drying dandelions or parnsips. In harvest time, corn was gleaned grain by grain from any missed by the Germans, and painstakingly ground in home mills originally intended for coffee or spices. Breeding rabbits for the pot, and catching sparrows from hedgerows supplemented the diet with a little protein. Bird's eggs of any type were filched from nests. 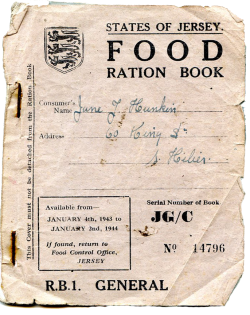 Occupation Menu
According to the book The Model Occupation by Madeleine Bunting - here is a typical day's diet on Jersey during 1943:

Living in Fear
Thousands of islanders traded on the Black Market, or stole from the Germans to survive. Farmers were luckier, if thery could hide a pig or chickens, but those in towns suffered real hardships. In the face of German authority, islanders were powerless. One wrong word could lead to an appearance before the court and transportation to a French or German prison camp. Islanders witnessed the inhumane treatment of the slave workers brought over from occupied territories in order to build the German fortifications, and they feared the same treatment. Between 1940 and 1945, more than 300 islanders were taken from Jersey to concentration camps and prisons on the continent, for crimes committed against the German occupying forces. 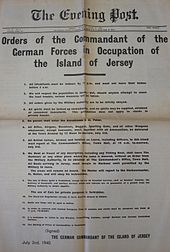 Cooking
As the occupation progressed, cooking grew difficult, as finding enough fuel became harder. The island was denuded of trees by the German forces. Not only was there no wood for fuel, but nowhere to hide for any type of Resistance, and no hope of escape from such a large invasion force, without capture.

Communal kitchens were set up to minimize the amount of fuel needed for cooking, but to stay warm in the winter months it was still essential to search for kindling and wood, and anything else that could be burned. Everything had to be made - soap soon ran out, and toothpaste had to be made by mixing soot and chalk dust.

By Christmas 1944, electricity was no longer available. Candles became scarce, and winter evenings were spent in semi-darkness by the light of a tin can full of oil, with a bootlace for a wick. Lack of warmth and gnawing hunger made winter on Jersey a true misery.

All food supplies were cut off altogether after the D Day landings of 1944 when France was liberated. Starvation began to stare people in the face. Many succombed to illnesses associated with malnutrition. When the first Red Cross parcels arrived on 27 December 1944, people wept.

My new novella, The Occupation is based on the story of  a Jerseywoman who hid her Jewish friend from the Germans. The real life story can be found here.

You can order the book (in an anthology with another ten WW2 novellas) by clicking the picture. 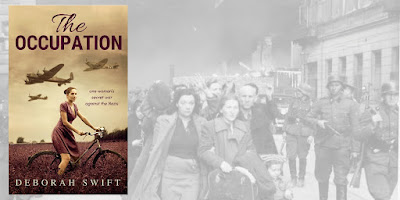 Links:
Channel Island website: https://www.theislandwiki.org/index.php/Food_and_Rationing
Read more about the occupation of Jersey on the BBC
Or in The Telegraph

Right off the bat, we need to state that our charges will be settled and failing to barge about charges in light of the fact that our normal clients realize that we just give quality Doha Escorts Girls