I want to speak to your manager!

If you’ve ever been left on the phone listening to tinny music and assurances that “Your call is very important to us,” then spare a thought for the outraged trader whose draft letter of complaint turned up near Hadrian’s Wall a few years ago. 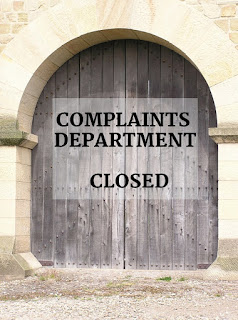 Parts of the letter are missing but there’s enough to piece together most of the story. The man seems to have got into a fracas with some soldiers who threatened to tip his goods down the drain, and subsequently beat him with sticks. When he objected, they beat him again.

Then, to make matters worse, nobody wanted to listen to his complaint.

He tried the men’s Commanding Officer, but the great man was off sick.

He tried the Commanding Officer’s assistant but got nowhere.

He tried various other centurions, but none of them wanted to know - and finally he’d had enough.

We don’t know exactly which “Your majesty” the letter was intended for, but Hadrian was touring Britain at about the time it was written and, since in theory any citizen could appeal to the Emperor, it’s possible that the victim decided to go right to the top.

As he explained, he was not only an innocent man with a good reputation, but a man from overseas. And now he’d been beaten until he bled, as if he were some sort of criminal!

It’s hardly surprising that he claimed to be innocent and honest, but the third reason for his outrage is more interesting – he was an expat. He was more or less saying, “I’m one of your own people!” as opposed to being a native Briton. Giving a beating to a Briton, he implied, would have been perfectly acceptable.

There are long decades of history during which we know very little of how the Britons and the Romans rubbed along together. British names appear in trading documents (and on curses!) from the relatively peaceful south of England, but the military letters that have turned up on Hadrian’s Wall barely mention the locals. There’s a disparaging report on their fighting skills that refers to them as “wretched little Brits” (Brittunculi), but that’s about it.

There is other evidence, though. The other day I did one of my on-the-way-to-somewhere-else whistlestop tours of a museum – the sort where I rush around glancing at my watch, taking hundreds of photos and not stopping to read anything. Suddenly the rush came to a halt. I was in the Corinium museum in Cirencester, but wasn’t that the same tombstone I’d seen at Corbridge, miles away on Hadrian’s Wall?

It wasn’t until I got home and compared the photos that I realized it was the same design, but commemorated a different cavalryman. I’ve no idea how many stones there are like this, but here are the ones honouring (from left to right) Dannicus, Genialis and Candidus. Each man is shown valiantly brandishing a weapon from the back of a prancing horse. You have to look a little more closely to spot the natives. 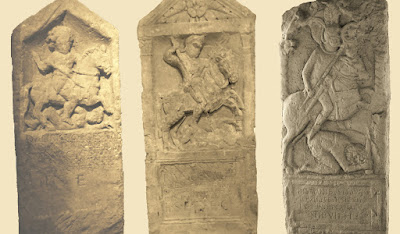 In case you can’t make them out, I’ve highlighted them in red below. Greater minds than mine may be able to tell you if they represent the fallen from a specific battle or just generic barbarians, but either way, it’s pretty clear where Candidus’s boot is pointing. Hardly a design calculated to win the hearts and minds of the locals in an occupied country. 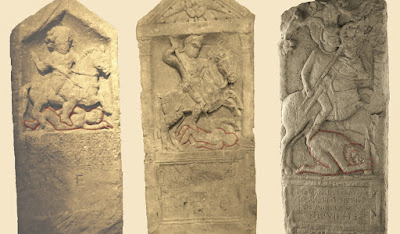 So did our outraged expat get justice, or was he left to seethe at being beaten like a lowly native? We don’t know. All we have is a draft of the letter, so perhaps a fair copy reached the Emperor and justice was done. On the other hand, that draft was found in the quarters of a centurion – so maybe it was intercepted before it got anywhere, and all the man got for his trouble was another beating.

So intriguing to think of this poor chap writing a letter of complaint and what kind of response he might have had. I can't help feeling that he'd probably have been complaining on twitter had it been available then. It reminds you, in a way, that human nature doesn't change. It is really interesting to see what the Romans and the traders thought of Britain and the people. Thank you for a fascinating post.

The ancient Celts had an intriguing way of dealing with complaints... each household had a bench outside the door. If someone had a complaint against someone else, they went to their house and sat on the bench until they were recognized. This could take some time, which gave the complainant a chance to evaluate how upset he really was over whatever the issue was. When the lord of the house granted the complainant entry, they would be invited inside to dine and drink and discuss the issue at hand.

Sorry Karen and Mrs Splapthing - only just caught up on these comments! Yes, I think Twitter would definitely have been this chap's next port of call in an attempt to 'name and shame' the culprits. (He might have given the area a terrible TripAdviser review, too.) Still, in the absence of the internet I love the idea of the victim sitting on a bench in silent accusation, waiting to see whether they or the accused would crack first!