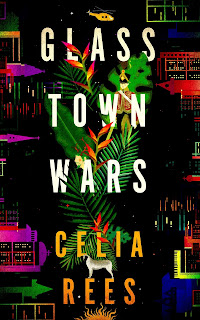 In a previous post, I described the genesis of my new novel, Glass Town Wars. In that post, I hadn't got much further than the initial idea. All writers know that, no matter how good an idea is, the proof of the pudding is in the writing.
To re-cap, for those of you who either missed my post or who can't be bothered to click on the link, I'd had an idea for a book which would take a boy from the present and pitch him into the fantasy world of the Brontë siblings, a world which they called The Glass Town Federation and then Angria. I had a device for getting him there and I knew what I wanted to happen (he would meet the young Emily Brontë) but didn't have much beyond that. Crucially, although I knew something of Glass Town, Angria and Emily's later world of Gondal, I had yet to study the juvenilia in any detail. Cowardice on my part. I didn't want to discover that the idea wouldn't work and that I'd have to scrap it, especially as I'd more or less sold it to a publisher.

I had my set up. So, now it was time to address the juvenilia. The Brontë siblings' early writing is contained in a number of tiny little handmade books (see my post, 18th October). Luckily, these have been collected, deciphered, edited and published in handy volumes, like Christine Alexander's Tales of Glass Town, Angria and Gondal. 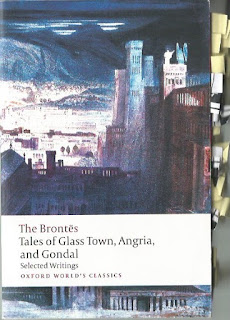 I began to read and found a world that was precociously brilliant, brimming with creative exuberance and dazzling, instinctive, natural talent: fascinating, elaborate, complex - and completely crazy. The Brontë siblings wrote from childhood into adolescence and young adulthood and they wrote a lot. They drew on anything and everything to make the worlds they were creating: current newspaper stories, events local and historical; they filched wholesale from writers they admired and liberally incorporated stories that they had heard: local legends and folk stories, fairies, ghosts, ghouls and witches. They peopled the world with whoever they wanted in it: dukes and duchesses, friendless young women and cigar smoking gentlemen, pirates, low life thugs and body snatchers, doctors, journalists and printers. Everything, anything, they wanted to happen, happened. One of their earliest inventions were the mile high Genii who could build cities in the middle of no-where, preside over the rise and fall of empires – the Genii, of course, were the Brontës themselves.

They founded their world at the mouth of the River Niger in Africa with Glass Town as its capital, yet less than a day's ride away, Parrysland (Emily's territory) was suspiciously like Yorkshire, Rossland (Anne's territory) was like Scotland because they admired the work of Sir Walter Scott. And so on. Across their world, wars raged, revolutions erupted and were suppressed, characters were killed off and resurrected, love affairs conducted, marriage vows made and broken. All of this was written, not in story form but in reports, articles, announcements, poems and advertisements in tiny volumes that are really magazines and newspapers, written for, about and by the citizens of Glass Town. The whole complex fantasy grew from a box of wooden soldiers given to Branwell on his ninth birthday. The size of the miniature publications had been carefully calculated by him so that they were the correct dimensions for the original wooden soldiers. The body of writing changed as the siblings grew older but the books containing it were always small, the writing always tiny because this was a secret world. They were writing for themselves, not for anyone else. 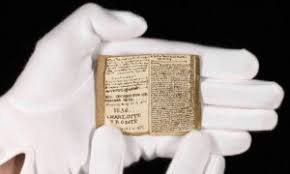 I found much to admire. I particularly loved the different forms their writing took but the anarchic nature of much of it meant the fantasy world lacked any kind of cohesion, internal logic, or discipline. They were children, writing like all children do, without hindrance and constraint, simply writing about what they wanted to write about, what they wanted to happen, as children might write fan fiction now. They were writing to please themselves, not an external reader. All young writers tend to have this is common and this way of writing often continues on through adolescence to young adulthood as it did with the Brontës, although that is probably the subject of a different blog.

I admit to being a bit foxed. Even in fantasy there has to be internal logic within a story and there was none here. The only way forward, other than abandoning the enterprise altogether, was to embrace the craziness. Tom, my modern character, is my commentator: it doesn’t make sense to him, either. I looked past the writing to the young authors themselves. There was conflict there, especially between Branwell and Charlotte. As they grew older, their vision diverged sharply. They wrote against each other in rival Glass Town publications. Branwell's focus was on politics, war and fighting, Charlotte preferred palace intrigue and romance. I also detected rebellion in the ranks. At some point, Emily and Anne must have tired of being bossed by the older two and decided to found their own world of Gondal. That was the point where I would introduce Tom. Nothing written by Emily or Anne has survived, apart from some poems, so I had carte blanche. Rebellion would mean war in Glass Town and out of it.

The young Brontēs had given me a fascinating world, not least the Great Glass Town, beautifully described in detail - they were talented writers even as children - and a fabulous cast of characters from the Dukes Wellington  and Douro to Branwell's lowlife 'rare lads': D'Eath, Sneaky, Tom Scroven, Dick Crack-Skull and Richard Naughty. A perfect villain in the person of the Duke of Northangerland aka Rogue. Haughty dark beauties, like Lady Zenobia Ellerington and the passionately independent Augusta Geraldine Almeida, A.G.A., Emily's character who will become Queen of Gondal.

I'd take my cue from the Brontës - anything goes. In the background is the gaming that got Tom into this in the first place. Got him in, but can’t get him out again. Fantasy Past meeting Fantasy Present. But fantasy doesn't exist in time and space. So if a character from one world can enter another, why not the other way round? Anything can happen, right? So if a boy from the present can go to Glass Town, why not take Emily Brontë into our fantasy worlds: Apocalypse, Zombies, Grand Theft Auto, Gotham City? I don't think she'd have been phased by it, not one little bit.

This sounds fascinating, but so complex! Looking forward to reading it - not sure if it's in hardback? Must check.