WHAT'S IN A NAME? by Penny Dolan.


Last Sunday people stopped, stood silently for two minutes in honour of those who died in World War I and in more recent conflicts. People remembered the names of those who had died: the names carved on War Memorials or told in family stories whether in Britain or elsewhere. 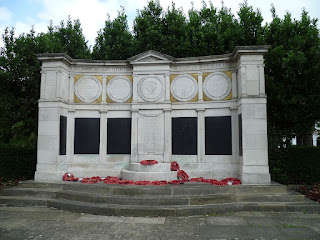 This History Girls post is a personal story about name and identity and the aftermath of war: the subject is my mother’s oldest brother, named Herbert, who was born in India in 1910.

His father was true army, both as an orphaned boy-soldier and as a man. His mother was the sixth of seven children of another Indian Army officer and, in that time and climate, both would have been familiar with death. They brought the boys to England sometime around 1914. Herbert and his two brothers would have been far too young to serve but perhaps they travelled on the troopships bringing the Indian soldiers to Suez and on to France.

Herbert was the oldest son: however he did not want to be a soldier. Studious and sensitive, he took a clerical post and became interested in the church and books and amateur dramatics.
Then, aged around twenty, along with a close friend, he converted from Anglicanism to the Catholic Church and took a new name: Michael. 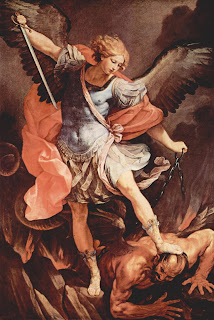 Saint Michael the Archangel, venerated in Christian and other faiths, is depicted with the sword he used to defeat Satan. In another role, as the Angel of Death, he offers redemption to dying souls and is therefore a rather useful devotion for anyone involved in battle.

A good soldierly name, but his father did not welcome the religious conversion. Herbert’s mother wanted to follow but that caused so marital trouble that she took it no further.

Not long after, Michael chose to pursue his vocation. He went to Begbroke Priory in Oxford, the Novitiate House of the Servants of Mary. I do wonder what had happened in his life that had made him so devoted to Our Lady of the Seven Sorrows? 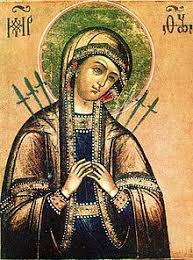 Had he seen disabled soldiers on the London streets? Or lost friends in the Flu Pandemic? Had his mother's and little sister's illnesses driven him to a deeper faith? Was any unknown sibling lost on the way? Something made Herbert Michael take a different direction but I do not know what.

On his ordination to the priesthood, he chose another military name: Martin. 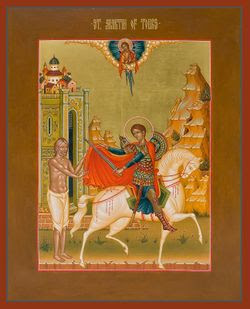 Saint Martin was a soldier in the Roman army. As he approached the gates of the city of Amiens, he met a half-naked beggar. Martin tried to give him his thick army cloak, but the beggar refused, saying that would leave Martin without one. Martin declared he could not leave the beggar to face another cold night. Impulsively, Martin slashed his cloak in two, gave one half to the beggar and went on his way. That night Martin saw a vision of Jesus, wearing the half-cloak he had given away. Martin became a revered priest, bishop and saint and his half-cloak was kept as a precious relic in Tours cathedral.

His order sent Father Martin to Salford during the war years, working in the Manchester slums. He was rarely able to visit home. On his annual visit to the Servite Mother House in Fulham, London, Father Martin could visit his mother for an afternoon. Sometimes he brought a troop of Scouts south to a Jamboree in Gilwell Park, near Epping so we could visit him there. But mostly he stayed away.

He led what seemed to me to be an odd but culturally rich life. We had some of his now unwanted books around: books of poems and plays and Lake District walks and watercolours. He sent me letters with amusing drawings and introduced me to the Victoria and Albert and the British Museum. I adored him from an awkward distance, for he could have a terrifying temper.

A sense of separation was inevitable, I suppose. Despite various vicar-detective tv fantasies, strict religious observances kept faiths apart during those decades.

Catholicism was seen as a faith of foreigners, with sins told in secret. The Church liturgy was not straightforward but recited in Latin with bells and even the daily practice was full of precise rituals and prayers. Communicants fasted from the evening before Mass, both the rich and those who had little food in their bellies in those hungry times and there was all that fuss about fish on Fridays. Divorce was impossible and Catholics could not attend any service – even a marriage or a funeral – in the church of another faith without permission, and those who entered the religious orders were encouraged to view the order as their family, rather than real relatives.

Maybe more than all that, as I grew older, I picked up another problem. His younger brother fought in the Second World War and came back from Dunkirk with his hair turned white. My father, who flew in bombers, returned with headaches and violent mood swings.

Whenever they got together, and Uncle Michael was mentioned, there was a slight, silent accusation in the air that, for all his soldierly names and his good work in the slum parishes, the beloved man was a soldier’s son who never served in the war.  It was one of those unspoken silences that echo on and on in the wake of war.

Fascinating and well told story. The personal point of view made it all the more touching to. Thanks for sharing.

Thanks for this, Penny. Sad and moving.

A sad story. It doesn't sound as if Uncle Martin found a way to be happy.

Still things I wish I knew about him, but they were all a reticent lot, and he was in a distancing "profession"! Eventually, he became the Prior in a Servite Priory in Germany and I think was very happy there. He died very suddenly of a heart attack just about the time you feel you could have asked serious questions.