Remembering all the Harrys

Private Harry Reynolds died in France on 29 October 1914, aged 25. A careerist soldier, his service was undistinguished. He appears in the army records only when he lost his equipment and slipped cigarettes to prisoners he was supposed to be guarding.

Harry, who joined up at the age of 14, was 4ft 11, with defective eyes. This short, unremarkable soldier left no family behind. There is no grave for Harry.

I found his story as part of a fantastic community history project in Herne Hill, the leafy corner of South London in which I live. The Herne Hill Society, in partnership with The Charter School and local volunteers, undertook a project to map the men and women connected to Herne Hill who were killed in World War 1. The team believe that as many as 700 local residents were killed. On my street alone, there were five telegrams delivered, five families left bereft.

This is their website and I urge you to explore it: www.memorial.hernehillsociety.org.uk/. 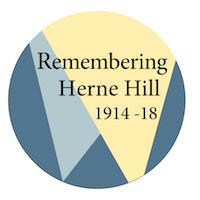 The team has unearthed many heart-breaking stories, including a family which lost its three sons. But somehow, Harry’s story is the one that has lingered. As historical writers, the lives we focus on tend to be the ones that are significant: either because they are remarkable, or they are important, or they fit the narrative pattern we’re seeking to impose.

Harry’s story brings no clarity to the greater picture. It adds nothing but a single digit to an unbelievably large number. The mud of France cracked open, swallowed Harry, and sealed again.

Most of us will be invisible to posterity and to be troubled by that lack of significance is pompous and hubristic. But most of us will be mourned by someone. Perhaps Harry had friends in the army who missed him. Perhaps poor, short, squinty Harry had a girl at home.

As the veterans of the World Wars die of old age, we need new ways to remember the Harrys. The map that this history project has created is hugely powerful. Children, in particular, need specific stories of flesh and blood people, not numbers, to force them to empathy. My older children were fascinated and appalled by the stories of the fallen soldiers who had lived on our road. The geographic specificity gave them a sense of connection and helped them really think about the lives, and deaths, of these men.

We talk of bringing history alive, in fiction and non-fiction. To do that demands an emphasis on the commonality of human experience even as we mine the past for instances of difference and uniqueness.

But London, much as I love it, is a strange and hotchpotch place which constantly erodes a sense of commonality. People pass through, neighbours fail to connect. Most of us are incomers to our London villages. Most of us, too, are not church-goers. We don’t have that sense of belonging to a place that can make Remembrance Sunday so unbearably moving: I remember, in particular, being in a village church in Norfolk for one Remembrance Sunday service, and the surnames of the fallen were the names on the graves and, doubtless, in the records of marriages and baptisms.

We Londoners live, secluded in our overpriced houses, and disconnected to our past. We are ancestor-less.

I was thinking about this, as I watched a friend’s ten year old find the story of a man who grew up in the house next door to her: Lieutenant John Hood. John was born in Herne Hill, and baptised in the church attached to my kids' old school. He studied at Cambridge, and was beginning a career as a teacher, before enlisting. He joined the 29th Siege Battery in France in November 1916 and for the next two years fought in Belgium and France. John Hood survived the German guns, but caught influenza on 11 November 1918, and died three days later in France.

One hundred years after John Hood caught influenza, the team behind the Memorial project organised a two minute silence in the centre of Herne Hill during the usually busy Sunday market. We stood amid the veg-sellers and the artisan butchers, the smell drifting past from the cheese stall; the fat from the burgers spitting and the steam rising from the giant vat of tartiflette. Kids and dogs and hungover youngsters clutching coffees.  All the busyness of a London Sunday.  Then a teenager from The Charter School played The Last Post, and we all fell still.

There is a particular intensity to a silence that falls on a busy London street. I found it deeply moving - all these decent, unremarkable strangers standing together. It gave me a much needed dose of optimism. I have been dispirited of late by the mood music of public life, and its combative, fearful timbre. We seem to be more frightened than I can remember, more growlingly convinced of the coming apocalypse. Frightened people who feel powerless find anger easy.

We have different visions of the peril: for some it is Trump and Brexit, and the rise of the right; for others Corbyn and a resurgent Marxism. Then there’s the climate. The decline of the US and the rise of a more brutal Chinese hegemony. The coming of artificial intelligence. Putin gurning at Europe’s growing chaos. The likelihood that future generations will, at best, be poorer than us; at worst, face horrors that we cannot imagine. There’s a competitive edge to the catastrophising – my vision is more true and more terrifying than yours. We are strangers, gawping at a pick ‘n mix of dystopian futures.

I keep telling myself that there is an impulse in humans to anticipate an imminent Armageddon. True, yesterday’s silence reminded me that, sometimes, we are right and the Horsemen do sweep in and scythe us down. But it also reminded me that within all the tremulous cacophony of modern British life, there can also exist two minutes of meaningful silence.

You are writing some Amazing tips. This article really helped me a lot. Thanks for sharing this blog.
jabong coupons code