Stories From the City of the Dead by Catherine Hokin 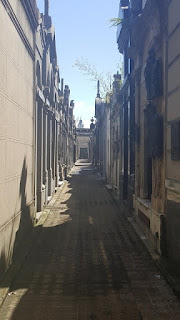 Going out-out - the big night out that demands special clothes and a day off to recover - is one of those phrases I would never willingly use (along with party as a verb). I am, however, now tempted to declare that I've just been on a holiday-holiday. I've spent the last year working on a WWII story set partly in Buenos Aires (it's out on submission, send kindness) not knowing that, while I was in the thick of researching it, my OH was planning a surprise trip. Yes, he's a keeper. I've just returned and would go back in a heartbeat. Buenos Aires is an astonishing city bursting with contradictions. It is part of a once-colonised country with a love of all things European; its public history is both extravagantly told and tightly controlled, masking a troubled, hidden past; it harbours real poverty against architecture that will make your jaw drop. It could spawn a thousand blogs (if that book makes it, it will) but I'm going to focus here on the famous Recoleta Cemetery where we went for a couple of hours and lost a day. 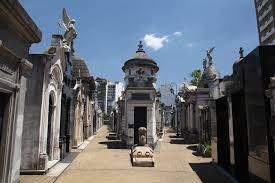 The cemetery covers over 13 acres and, although the surrounding land was once orchards and fields, it is now situated in the middle of one of the city's priciest neighbourhoods. The cemetery takes its name from the monks of the Order of the Recoletos and is built around their convent and a church (which can both be visited) dating from the 1730s. The cemetery itself opened in November 1822, after the monks had been expelled, and was opened to all religions after 1863. Inside its high walls there are over 6,400 statues, coffins and crypts, and some 30,000 inhabitants. It is laid out in blocks, with narrow sidewalks branching out from wide walkways. The mausoleums are built from marble in a variety of styles including art deco, art nouveau, baroque and neo-gothic, each style grouped together and adding to the sense that you are wandering through a city's neighbourhoods - some of which are more up-and-coming than others. Many of the buildings have glass fronts and coffins above ground as well as below and the state they are in varies considerably. A grave in Recoleta is bought for eternity: even if the annual fee for maintenance isn't paid, it won't be cleared. Several of the older tombs have been shored up but are crumbling and the coffins that are visible lie under thick layers of dust. Some, however, are still used and gleam with polished glass and starched cloths.

The cemetery is, of course, full of stories which run the full gamut from the personal to the political. There are generals on every street, surrounded by plaques commemorating their long-forgotten victories. It has a resident ghost - a grave-digger who worked for 30 years saving money for his own plot and statue and killed himself once the architect finished the work, walks round at dawn jangling his keys and unable to leave. There is also a great statue of a couple who fought so much in life their effigies are now placed back-to-back.

However, as befits a place where you feel quite certain Edgar Allen Poe would have thrived, the most tragic (and popular) stories centre round beautiful young women. The story of Rufina Cambacere is actually the stuff of nightmares. Having been taken ill at her 19th birthday party, either with a heart problem/an epileptic fit/because she found out her mother was having an affair with her boyfriend (the stories all have stories) Rufina was buried in a beautiful marble tomb. Unfortunately the poor girl wasn't dead. Screams were heard on the night of the burial and, when the groundsmen plucked up the courage to investigate the next morning, the coffin had moved and poor, now dead, Ruffina was all covered in scratches where she had clawed at her face and throat. This incident is credited with leading to an Argentinean law stating that a body cannot be buried any earlier than twelve hours after the death certificate has been signed. Why it prompted her parents to add a statue of the poor girl emerging alive out of the tomb is anyone's guess.

Another cemetery favourite is the tomb of Liliana Crociati. Although the bronze statue looks far older, this mausoleum in fact dates from the early 1970s.

The young Liliana met her end on her honeymoon aged 26 when an avalanche swept over her hotel in Innsbruck, Austria and she died of suffocation. Rumour has it that she and her dog Sabú were so attached to each other that he died in Buenos Aires at the same time. The tomb, none of which is visible at ground level, is apparently a reconstruction of Liliana's childhood bedroom. That and the statue of her in her wedding dress patting Sabú was paid for by her grief-stricken parents. Interestingly there is no mention anywhere of the widowed groom. As you might be able to tell from the photograph (apologies for the quality, it was a very bright day), the green patina has been completely worn off Sabú's nose because visitors nowadays rub it for luck.

In Buenos Aires, Recoleta Cemetery also goes by the names the City of the Dead, the City of Cats and the City of Angels. Although it was the only place in the city where we actually saw a cat, Angels are really the place's emblem. They are everywhere although you need to crane up to see most of them. Some represent the Angel of Death and carry an hourglass, many carry trumpets or baskets of flowers; without exception they are beautiful and every face looks different. Which accounts for why we lost a day there.

There is one grave I haven't mentioned although many visitors flock to it clutching their flowers to poke through the gates and that is the one belonging to Eva Duarte Peron. Although Eva died from cancer in 1952, her body only arrived in the cemetery in the 1970s and the story of what happened to her body in the intervening years is as shrouded in myth as her life. A great mausoleum was planned following her death but the overthrow of her husband, President Juan Peron, in 1955 led to all references to Peronism in Argentina being erased. Eva's embalmed body disappeared - its alleged hiding places including a storage container labeled radio parts at a Buenos Aires military intelligence office and a graveyard in Milan - until Peron was restored in 1971 and brought the body back to Madrid. According to the (many and lurid) stories, he then stored the coffin in the dining room of the house he shared with his third wife, frequently opening it to look at Eva's preserved face. After Peron's death in 1973, it was left to his wife Isabel (who was now President) to take over control of the body. She had it interred in the presidential place, most likely to shore up support for her own power grab as Eva's name was now in the ascendant again. When Isabel herself was overthrown in 1976, Eva's body was turned over to the Duartes who were, by then, keen to acknowledge their illegitimate family member. Eva's mother was the mistress not the wife and she was turned away from all claims on the family estate when the wealthy Juan Duarte died. Its interesting to speculate what might have happened to Eva if the Duartes had been a little more welcoming in the 1920s - presumably not the harsh choices grinding poverty left her with. Eva is now interred in their crypt at Recoleta where her body is buried 5m below ground under two trapdoors and three plates of steel to prevent any further threat to it - Eva continues to be a controversial figure in Argentina, both despised for her brand of politics and worshipped to the point of a cult. Being in the former group, we gave that particular tomb a swerve and went back to the maze of mausoleums and angels we could more comfortably admire.

My advice if you visit - don't take a tour, do what we did and get lost. And then go to the barking mad cafe over the road and sit at a table with a frighteningly realistic Borges. They don't let go of their dead in Buenos Aires.

Posted by Catherine Hokin at 06:30

All my best hopes for your submission. A Buenos Aires WW2 story should be very exciting!

I agree to never take tours - for reasons I've never understood, the leaders usually by-pass that which is most interesting!