In last month's blog I interviewed Susan Major, the author of the book I am reviewing today: Female Railway Workers in World War II. Readers also had a chance to win that book, by answering what two jobs were banned to women on the railways. The answer was engine drivers and firemen - the latter being responsible for stoking the engine. 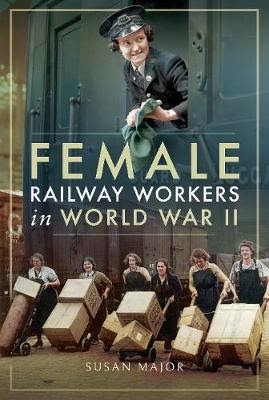 Women's exclusion from those roles brings us to the heart of the story of Susan's book: women were required to work traditional men's role during the war, just as in other sectors, but ideas about gender and femininity held sway.

On 9 March 1941, the Minister of Labour Ernest Bevin appealed for 100,000 women to enrol for war work in Britain, in fields, factories and railways - to replace the men who had been sent off to war. In 1940, the railway companies and the National Union of Railwaymen had already agreed to employ women, albeit at 4 shillings less per week for the same jobs. Support for childcare was available, with government contributions to allow women to work outside the home as well as keep the home fires burning; the presumption was that two women would be needed for every one man. By the end of the war the reality was almost reversed.

This wasn't the first time women worked the railways, Susan points out - there were female railway labourers recorded in the 1851 census; others policed turnpike gates. But the roles that women took on during World War I had been mainly public roles: goods and passenger porters, parcel porters, ticket collectors, carriage cleaners and clerks. Cleaning carriages had traditionally been viewed as men's work, even though cleaning was gendered; interestingly another reason women were not employed as carriage cleaners was that the role was usually 'the first step on the ladder to be an engine driver' (p.3), a carefully guarded male role.


By the time World War I ended, there were nearly 70,000 women in the railway workforce and some came back during World War 2. In 1942 the number of women on the railways was over 80,000.

Susan's book weaves together some wonderful anecdotes about women on the railways - taken from the National Archive of Railway Oral History - with media reports of the time to explore the tensions between perceptions of femininity, economic necessity and war time need. Whether women could carry heavy loads for instance, was discussed in the Nottingham Evening Post (1942), when a local fishmonger complained his kippers were about to be condemned by the government inspector. Though they had been cured in the north of Scotland, transport delays had led to their deterioration - he said it was because women worked as porters yet couldn't manage heavy loads.

In December 1940 the London Midland and Scottish Railway (LMS) reproduced a poem by Robbins Millar that used the term that 'porteress' to marvel, rather patronisingly, at the new phenomenon of women carting suitcases:


The Porteress
She'll be spry as a sparrow
At hurling a barrow
An absolute ace
At yanking a case
You'll never get waxy [bad-tempered]
She'll find you a taxi
Respond to your yell
Like a dashing gazelle;
And charge no extortions
For chipping large portions
In lumps and in chunks
Of your holiday trunks.


These observed accounts are set against lengthy extracts from women's own stories in Female Railway Workers, under chapter headings that track the women's own journeys: Getting in; Learning the Job; working with Men; Doing a Man's Job to 'Surviving Air Raids', 'Tricky Situations' and - of course - 'And then the Men came Back'. Nellie Nelson, for instance, a London and North Eastern Railway (LNER) porter at York, told the story of an 'awful parcel foreman:

He was a bit of a nuisance, so we cured him one day. you know, laxative chocolate you can buy in Boots? Well, we bought him some of that. we was all on number nine platform and we asked, 'Give you a bit of chocolate Tommy?' 'Aye' and he got some of this and said, 'You're a nuisance you lot I'm having no more chocolate off you lot'.

Women talk about their love lives, the lack of toilets, their friendships, the dangers they encountered, and the families they lived with. Women working on the railways were subject to the same hard work as men, alongside juggling life on the domestic front, and challenges specific to their sex and the inequalities of the time: sexual harassment, unequal pay, media sensationalism and precarious employment. There were positive things too: a sense of camaraderie with other women, interesting and diverse work, control - to some extent - over their rhythm of work (at least compared to women in munitions factories) and the acquisition of a wide range of skills.

There had been local union resistance to the idea of female labour in the early part of the war, with concerns about the role of men and the nature of the hierarchy that was in place. But the Restoration of Pre-War Practices Act 1942 laid down that women would be required to give up 'men's jobs' in order to accommodate returning soldiers.


Susan's book brings us the voices of women in an industry previously overlooked by most historians. Women working on the railways challenged myths of femininity and weakness and demonstrated their ability to learn new skills, work together,  undertake hard physical labour and endure difficult, often dangerous conditions.

This book is an important addition to the history of women in wartime and beyond.

Female Railway workers in World War II is available at Waterstones and all good book shops.
Posted by Fay Bound Alberti at 00:00

I feel very foolish. I thought the quiz was asking the jobs women were ALLOWED to do, not prohibited. And that's why I don't work for the railways. ;)

Notice the women loading or unloading parcels are wearing heels, making the job that much more difficult.

Yes, I wondered if the woman porter wearing high heels was a photo deliberately set up for the press.