I'm really lucky in that I live close to many old houses and castles. One very close to my house is Sizergh Castle which has a fabulous tea room and lovely gardens. 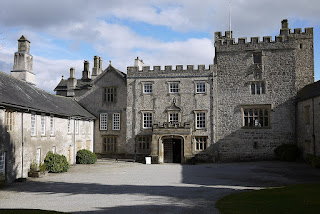 The name Sizergh dates from the 9th century and was originally spelled sigaritherge, meaning Sigarith's pasture (sigarith is a female name.)

The castle has been home to the Strickland family for nearly 800 years, beginning in the 12th century, and is still lived in by them today. So well-connected were the family, that a Strickland was chosen to carry the English banner at Agincourt. During the Wars of the Roses the family were Yorkists, and in the succeeding generation were linked with the Parres of Kendal - the family of Catherine Parr, wife of Henry VIII. 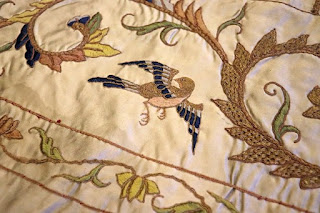 The original medieval Great Chamber, now the dining room, contains portraits from when Lady Strickland acted as governess to James Stuart, 'The Old Pretender' in exile in Paris. There is one of the young James, and also a bust of Bonnie Prince Charlie (his son). For the first time this weekend a relic of this time, the glorious bedspread of James II will be on show at Sizergh. The bedspread, made in Goa India, is sumptuously embroidered with gold thread and portrays mythical birds and beasts, and was given to Strickland family by the King as a thank you for their loyalty. If you visit Sizergh in the next few weeks you can see it on display, and also hear the conservator talk about the conservation of rare textiles.
Read more here 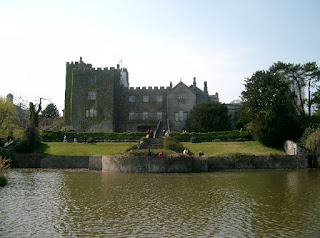 But the Strickland family's support for the Jacobite cause led to a decline in their fortunes, and the castle could no longer be updated to current fashions.  Because of this, its core remains largely untouched, and we are able to stretch back in history all those years to see the original Elizabethan Manor House flanking the 14th Century hall and pele tower.


The photo below is from an article on the castle by Matthew Penmott, and I can heartily recommend his site on the Castles of Cumbria.
The original Pele tower gave protection against scottish raiders. On the courtyard front is the Strickland Coat of Arms. The main entrance leads today into a Tudor Great Hall, which has since been adapted by different generations of the family into a series of smaller rooms. An Elizabethan corner block and wings enclose a courtyard, and on three sides of the castle the remains of a moat is visible even today.

Hard Times
In 1891 the ornate panelling from the Inlaid Chamber, along with various furnishings, was sold to the V& A for a thousand pounds, to raise cash to keep the house maintained. What a decision to make! 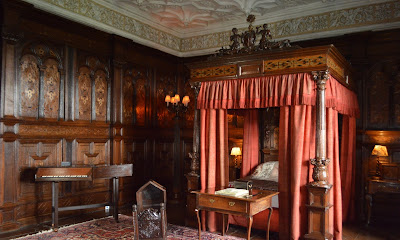 But now, after more than a century, and thanks to the Victorian and Albert Museum, the original panelling and stained glass which was tailor-made for the room at Sizergh, has now been returned home to the castle on permanent loan. (Pictures from The Guardian) The beautifully wrought panels were inlaid with English Poplar and “Bog” Oak to create a three dimensional effect of geometric and strapwork motifs.

Ghost of the Starved Lady
In the Pele tower, ghostly sobs denote the presence of a lady whose husband, before a raid by the Scots, locked her away in a room with an impregnable door - presumably to keep her safe. But her husband died and the terrified servants abandoned the place. The poor wife starved, and as she tried to claw her way out she went slowly mad. Her screams supposedly still haunt Sizergh on dark and spooky nights......

Apart from the attraction of the ghost, Sizergh Castle is managed by the National Trust and is well worth a visit - beautiful grounds and gardens too, along with more than a thousand years of history! If you go along in the next few weeks you will also be able to view some 17th Century Flemish tapestries, rare examples featuring stories from Plutarch, including the tale of Anthony and Cleopatra.

As many of you know, I have a keen interest in the 17th Century, and you can find my novels set in this era here, or on my website www.deborahswift.com
Posted by Deborah Swift at 09:57