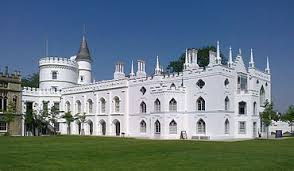 Last month I was lucky enough to catch the last day of an exhibition called Lost Treasures of Strawberry Hill.  Horace Walpole was a great original, the son of Robert Walpole, a powerful, corrupt statesman and de facto first prime minister.  Horace had exquisite, if camp, taste and inherited enough money to indulge it. Walpole has been called the father of British art history as well as the inventor of gothic and he was also, as the  author of The Castle of Otranto, the founder of gothic fiction. In this portrait by  Rosalba Carriera we see Horace as a rich young aristocrat in Venice on his Grand Tour, looking fey and delicate with  his powdered face. 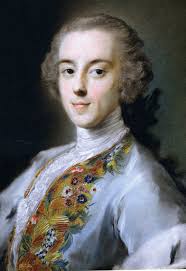 He never married or had any illegitimate children and is generally assumed to  have been gay.  At the age of twenty-three his father pulled strings to get him elected as Whig MP for Callington in Cornwall, a seat he held for thirteen years without ever visiting it. When he was about thirty he bought a small villa in Twickenham, originally called "Chopped Straw Hall", which was not nearly elegant enough for the fastidious Walpole. He He called it “my little plaything” and spent the rest of his life transforming it, filling it with his wonderful art collection.  This was not just a private collection; he used to charge a guinea for a tour by his housekeeper. although he insisted that no children were to be admitted. "The highest personages of the realm," including the royal family, came to visit his creation. In a letter to a friend he complained: "I have but a minute's time in answering your letter, my house is full of people, and has been so from the instant I breakfasted, and more are coming- in short, I keep an inn; the sign, the Gothic Castle...my whole time is passed in giving tickets for seeing it, and hiding myself when it is seen- take my advice, never build a charming house for yourself between London and Hampton Court, everybody will live in it but you. " He loved jokes and once wrote, “The world is a tragedy to those who feel, but a comedy to those who think.”  He used to receive guests wearing this wooden trompe l'ceil cravat carved by Grinling Gibbons.

After his death in 1797 the house and contents were inherited by a cousin.  After  a famous  sale in 1842 that lasted for twenty-four days all four thousand objects in his collection -  paintings, miniatures, furniture, coins  - disappeared into private collections around the world. Luckily Horace kept meticulous records of everything he collected and wrote to a friend: “How merry my ghost will be, and shake its ears to hear to hear itself quoted as a person of consummate prudence!”

A brilliant art detective, Silvia Davoli, spent years tracing his collection and,for a few months,  a hundred and fifty works  from fifty-five lenders brought this unique house back to life. Walpole  coined the word  "gloomth" to describe the mixture of warmth and gloom he wanted to create in his fake ancestral castle, which was complete with an armoury and battlements. The lavish use of deep red, as in the gallery you can see below, creates a sympathetic atmosphere.  He wrote of it, rather disingenuously, “Well! But I begin to be ashamed of my magnificence.  Strawberry is growing sumptuous in its latter day...in truth my collection was too great already to be lodged humbly.” 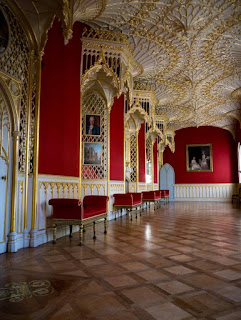 He loved objects that told a story, the more macabre the better. For example:  a clock Henry V111 gave Anne Boleyn on the morning of their marriage; Mary Tudor’s hair;  an Aztec mirror which Queen Elizabeth’s necromancer, Dr John Dee, is supposed to have used in his supernatural research. Hogarth, one of his favourite artists, visited the the convicted triple murderer Sarah Malcolm in her cell and painted a sympathetic record of her. Another exhibit was Hogarth’s painting of a production of John Gay’s The Beggars’ Opera, which satirized the corruption of Hioace’s father Robert . 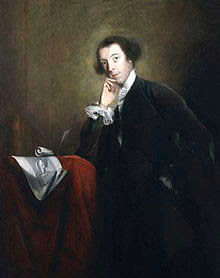 This  portrait of Horace aged about forty by Joshua Reynolds suggests complexity, wit and subtlety.  He holds a print of an imperial Roman  marble eagle.  He loved anuimals and once wrote, “ I know that I have had friends who would never have vexed or betrayed me, if they had walked on all fours. His beloved  cat was also resurrected in this remarkable exhibition;  when his pet tabby fell into a tub while trying to catch goldfish and drowned, Walpole commissioned his old schoolfriend Thomas Gray to write a poem in its memory,  Ode on the Death of a Favourite Cat Drowned in a Tub of Goldfishes:

on a lofty vase’s side,
Where China’s gayest art had dyed
The azure flowers that blow.

The blue and white Chinese porcelain  vase refersred to in this poem could be seen in the hall of the house. This famous poem was first published by the Strawberry Hill press, which Walpole set up in 1757 in the grounds. Here he printed his own works and also designed his own typeface,   His four volume Anecdotes of Painting in England is still admired by art historians and his poshumously published memoirs are very entertaining and shrewd about politics.
.
Other exhibits were a portrait of the Percy sisters by Van Dyck; a formidable portrait of Catherine de Medici and her children; a double portrait of Henry VIII and Francis I and a cabinet full of Walpole's miniature collection, which was  considered one of the best in Europe. He also supported many female artists,  including Anne Damer and Diana Beauclerc. Like the Royal Pavilion in Brighton and John Soane’s museum in Lincoln Inn Fields, Strawberry Hill is imbued with the eccentric personality of one man. 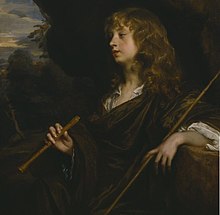 A boy as a Shepherd by Peter Lely