There’s been a bit of a boom in historical films recently - and I was lucky enough to get a preview of several at a film festival. Not, however, the one that’s attracted all the controversy: the new Mary Queen of Scots film which has been criticised so freely – it shows a meeting between Mary Stuart and Elizabeth Tudor which absolutely never happened. Though actually, every single drama about them has imagined that meeting, from Schiller back in 1800 to the old Vanessa Redgrave/Glenda Jackson movie.

There is no such thing as a fully historically accurate movie – hasn’t been, since The Birth of a Nation in 1915 painted the Ku Klux Klan so favourably. How could there be, when there is no one single fully authentic version of history? But each generation (maybe even each person) makes their own demands as to the kind of accuracies they do and do not need- what Simon Schama called selective fastidiousness -  and that can change quite dramatically.

Each generation giving a take on history reflects its own preoccupations; so that Laurence Olivier’s Henry V tells us first about the England of World War 2 - then, about Shakespeare’s England – and by the time we get round to its version of Agincourt, we’re hardly talking history.

So, what is a historical film? The great ancient world epics beloved of old Hollywood? The heroics of Errol Flynn? Or the kind of costume dramas once made by our own Gainsborough Studios – what one film historian called ‘trash history’?. Arthur Schlesinger reckoned that to count as a historical film, a picture has to turn on public events as well as private ones, and I think that’s fair.

So you’ve got all war films – and some, but not all Westerns – and War and Peace but not Anna Karenina; and Gone With the Wind is certainly a history movie. Spartacus, and Lawrence of Arabia, Gandhi and Gallipoli, and Charlie Chaplin’s Gold Rush, actually. We like to pride ourselves today on having got past the cliched kind of movie history, and certainly it’s easy to sneer now at the obvious falsity of the old`costume dramas. A Margaret Lockwood lookalike making riding motions, while the scenery scrolled along behind her . . . But there is nothing new under the sun. We today don’t have the franchise on attempted accuracy. Yes, a charioteer in Ben Hur was wearing a wristwatch; and no, that probably wouldn’t happen today. But the costumes for Gone With the Wind were made from fabrics specially woven from museum samples, and on Errol Flynn’s Charge of the Light Brigade, replica Victorian stamps were used on inter-office correspondence to set up an on-set mood of authenticity.

But all that attention to that kind of detail takes us so far and no further. There are some territories on which history and Hollywood must always disagree. I once attended a talk where one of the panellists was a playwright commissioned to write a biopic of Bonnie Prince Charlie and not finding it easy. The problem was all those drunken years in foreign courts with which the real Charles Stuart’s life petered out, ineffectually and inconveniently. A film story needs a definite ark. If only the Prince had the decency to die at Culloden, then they might have had a movie . . .

At that same talk, I heard the man who wrote the film Elizabeth praise the importance of research. You read it all, he said, then you write it all down. He recommended a roll of wallpaper lining, to fit in the exact chronology. And then – he said -  you take all that research, and you throw it away. Because film has its own agenda. The language of film is emotion, as I once heard Harrison Ford say. Or to quote an earlier producer: if you can cheer the hero and boo the villain, if the action is also fast and plentiful, then go into production straight away. 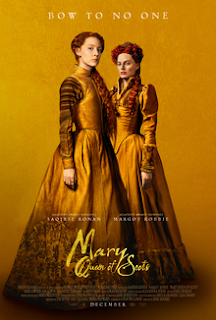 Action isn’t necessarily a problem with historical subjects – but heroes and villains? Real, past people are never going to slot themselves easily into those categories. Take one of those two films I saw just recently, the wonderful The Favourite with Olivia Colman as Queen Anne, Rachel Weisz as Sarah Churchill, Emma Stone as Abigail Masham and a colourful line in dialogue. Him: ‘I should have you stripped and whipped.’ Her: ‘I’m waiting.’ Think Fifty Shades of Eighteenth Century - but, the emotional dynamics of the tale reflect a real truth, while making a cracker of a movie. Mike Leigh’s Peterloo, on the other hand - the important story of the 1819 cavalry charge that slayed British citizens on British soil -  suffers from treating the historical facts a bit too respectfully. Know what? I can forgive Mary Queen of Scots, and that ahistorical meeting. And I say that as a historian of the sixteenth century.

That said, historical movies matter. The sequence of events shown in the groundbreaking Soviet film Battleship Potemkin has, in the 80 years since, been co-opted as the official version of the story; nor does it matter (said one of the director, Eisenstein’s, colleagues) since ‘the film is more historical than history’. Gore Vidal suggested we all`accept movies as the only source from which people will soon take their history.

I worry that the makers of historical films have a responsibility they don’t – or can’t afford to – acknowledge . . That each age get the historical films it deserves; and our school report would be ‘tries hard, could do better’, basically. Mary Stuart and Elizabeth Tudor featured hugely in each other’s lives and each other’s imaginations. The movie meeting, in a sense, only dramatises one, emotional, kind of reality.

But I do believe that if film makers are going to blend fiction and fact, they have a responsibility at least to aim for the best version they can, of the great movements of the past, as their own age most carefully understands them. Not just to grab a convincing splash of historical colour for another kiss kiss bang bang story.

(Celia Rees is laid low with the flu and will be back next month. We are grateful to Sarah Gristwood for filling in for her)

I think I can forgive lack of accuracy as long as they don’t try to persuade us that “we did research! Most accurate historical film ever made!” And many of them do. As for Gone With The Wind, they still had some veterans of the Civil War around, not to mention that Margaret Mitchell grew up listening to people’s memories of it. But I do recall reading that one veteran commented that the massive war dead scene was not accurate - if there had been that many in the battle, they might have won.

The movie industry has a priority to make money - nothing else - they do this by entertaining the audience and hoping to get bums on seats then franchise spin-off sales. Accuracy, alas, especially with Hollywood movies is way down the list of essential elements. (Most Western movies have to be connected with Hollywood one way or another in order to get the distribution and make the money.)
So I don't think we expect to watch movies that are 100% (even 75%!) accurate ... (we don't know the 100% accuracy for a start!) BUT it is a great shame that these movies makers can't grasp the fact that accuracy - with the big facts - would actually make a better movie! Take the MQScots/Liz I example: if I was writing that script I'd have made a big thing about them never meeting: why didn't they meet? Maybe they _almost_ met but something went wrong, maybe Liz/Mary had every intention of meeting but the political guys behind the scenes kept engineering that it wouldn't happen ... loads of exciting and entertaining reasons for a non-meeting, and thereby creating a much more congenial talking point for the movie: "Oh, if only they had met, maybe things would have been different...'

Incidentally, the movie 'Master & Commander' starring Russell Crowe was widely praised for its accuracy - I am reliably informed (by the person who initially built the replica ship now known as HMS Surprise) that there is only one 'noticeable' blooper in the entire movie... the cordage that has to be cut during the storm when rounding the Horn is modern rope - sailors can spot this instantly. As for the rest of the film, in my opinion, it's probably the best movie ever made. (But I'm biased because I adore that ship!)

I feel the main problem with historical movies can be that, even if one is told or knows the facts, the visual images can stick very firmly in the mind, especially when reinforced by the viewer's emotions.

You could have mentioned Braveheart which has some wild imaginings but it also was seized upon in Scotland at the time by the Nationalists - the face paint of the film became a fashion. In spite of being questionable history from start to finish it plugged in - in Scotland at least - to some popular mood. It really is just a Western of sorts. Anyway that is my ha'penny. Otherwise very interesting article.

Very interesting blog post! I think accuracy is always problematic even with historical fiction where many/most authors strive for accuracy. There aren't always records about these things kept from the past and even if they are, some are so obscure that you can't reach them, not even in libraries or university archives. I recently entered into a discussion on a historical fiction Facebook group about accuracy when it comes to language (i.e., using idioms, words, and phrases from the time period in which an author has set his/her books). I noted one example in a historical fiction story I read a while back where the story was set in the 1870's and the author used the word "loanshark" which, when I looked it up, was recorded as having first been used in 1905. A commenter pointed out that these are usually written records of when a word/phrase/idiom was first used and isn't necessarily accurate in terms of whether it was used in spoken language before that time. While this is true, I know for myself as a historical fiction writer, I would rather err on the side of caution and go with what research I find in terms of accuracy (for anything, not just words or idioms). I know many readers wouldn't care about this kind of detail but as a writer, I do :-).