Sometimes, I don’t mind admitting, it’s a struggle to know what to write for my monthly History Girls post. I shy away from the learned essays of some of my colleagues – not only do I not feel qualified, but often I simply don’t have the time to do the necessary research.

But today is the 75thanniversary of the Normandy Landings, generally known as D-DAY, so I couldn’t really write about anything else. The Normandy Landings, on 6thJune 1944, marked the start of the Allied invasion of Nazi-occupied France. This was the largest naval, air and land operation in history, and laid the foundations for the Allied Victory in Europe.  D-Day is a general term for the start date of any military operation, often used when the exact date is either secret or not yet known, but this operation was so significant that nowadays, when you hear the term D-Day, it tends to refer to the events of  6thJune 1944. 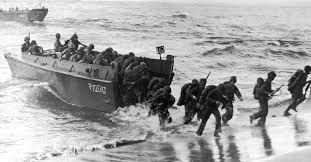 At the commemorations this week, there will be very few veterans left to remember their experiences and their fallen comrades. Anyone who participated in World War Two is very elderly now, just as, when I was a child, the veterans of World War One were very old. Listening to an American veteran describe his D-Day experience on BBC Radio 4 this week, I reflected on the first time I became aware of D-Day – indeed the first time I became aware of any commemoration. It was 1979, and I was ten. My P6 teacher, Mr Thompson, told us that it was 35 years since the D-Day landings. Few of us had heard of them, so he took the opportunity to give us a history lesson – one of those impromptu lessons so frequent then and so rare now. I remember him telling us that it didn’t seem so long ago to him, but we didn’t get that at all. 35 years! Three and a half times our lifetimes! Grown-ups were weird. 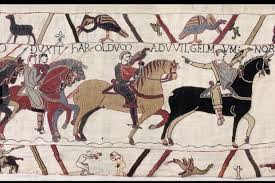 Since then, I have taken a group of school children to visit the Normandy landing beaches. We visited the Bayeux tapestry the same day. I wonder which felt more real to the children. The tapestry was ancient but it was tangible; we could see if not touch it, and buy miniatures for our walls.  The beaches, on the other hand, were empty, just sand and sea and a cold Channel wind. We had to people them with our imaginations. For the few veterans who travel there this week for the commemorations, I suppose they will people the beaches with their own memories of seventy-five years ago. 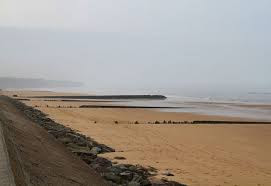 That impromptu history class of Mr Thompson’s was forty years ago. It doesn’t seem so long ago to me now.

Some years ago we went to Bagnieres in Normandy: it's a village on the beach where the Canadians landed. My husband's uncle was with them - though he wasn't Canadian - and we took pictures of the view he would have seen as he came up the beach. All around the village they have pictures of that time, with a little piece about what happened in that particular spot - it made it all seem very real. And there were commemorative plaques expressing the gratitude of the French people towards their liberators - though many of the French civilians paid a heavy price. Seems very sad that here we all are, remembering all this, at the same time as we are determinedly distancing ourselves from Europe.