A Brief Digression on The London Mob, (now also in Wolverhampton, Salford, Birmingham, Manchester and divers cities) by Catherine Johnson 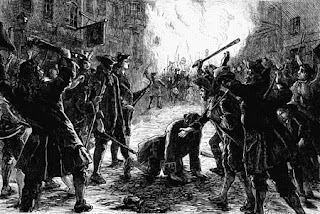 
To begin with the last verse of Newgate’s Garland by Jonathan Gay written in 1724; in which all society is corrupt, rich criminals escape and are even esteemed, and the poor go swing,
Some cheat in the Customs, some rob the Excise,
But he who robs both is esteemed most wise.
Church-wardens, too prudent to hazard the halter,
As yet only venture to steal from the altar:
But now to get gold,
They may be more bold,
And rob on the highway since Jonathan’s* cold:
For Blueskin’s* sharp penknife has set you at ease,
And ev’ry man round me may rob if he please.


*Jonathan Wild the Thief Taker
*Blueskin, the nick name of Jack Sheppard, the famous thief’s sidekick, Joseph Blake
That’s the last verse of a poem written close to three hundred years ago. However much we’d like it people have always praised criminal behaviour and railed against their rulers, by looting, senseless violence, and riot. When the whole society is corrupt and values the individual above all why are we surprised?
Can I first say I am not condoning what went on, the lives lost, the homes trashed and the nastiness that took place last week. What I am trying to say is that nothing changes. Just because our poor have BlackBerrys these days, doesn’t mean they don’t feel hopeless and worthless in ways we might not know (what kind of ridiculous optimist writes a book?). Acquisitiveness and love of money trickles down much faster than wealth and criminality is present at all levels of society. On thing I know for certain is that I would rather have spent all that cash we’re going to need to punish looters on Surestart and Libraries and Youth Clubs.
Anyway, the situation in the 1700s bears so many parallels to today that I had to write about it. The rich were getting richer, there had just been a huge economic crash at the start of the century, and although you might not quite win 161 million pounds on Euro Millions, gambling, at cards or lotteries, and drinking to excess were pastimes enjoyed by rich and poor alike.
In 1720 you might see, at Bartholomew Fair, an interlude entitled; The Broken Stock Jobbers; Or, Work For the Bailiffs, in which Mr Pluckwell, a Director and Mr Transfer, a Banker, set about swindling one and all.
At Execution dock, a few miles away, some poor soul’s’ last words when he was hung in 1717 were these; ‘Men, Women and Children, I come hither to hang like Pendulum to a Watch, for endeavouring to be too Rich too Soon. I am guilty of nothing more than outwitting the Bank of England by a sort of Collusive Practice, and that Body Coporate has play’d the same Game in their Turn’


The beginning of the 18th Century saw the end of the South Sea Bubble and the beginning of mechanisation and mass laying off of labour. The London Mob, then as now, were feared by the ruling classes. They seemed an uncontrollable mass, whose ‘enjoyment lies in mocking the law’ spitting at, swearing, and attacking their betters, even The Riot Act passed in 1715 did little to contain it’s worse excesses.
Tobias Smollett, in his History of England, 1760, wrote, ‘This was the age of interested projects inspired by a venal spirit of adventure; the natural consequence of that avarice, fraud and profligacy, which the monied corporations had introduced,’


Peter Linebaugh in his history of the time, The London Hanged, 2003, says ‘The proletariat were held in unremitting contempt, they were ‘from below’; in the ruling class imagination, proletarians belonged in Hell, where as in Tom Brown’s Letters from The Dead to the Living 1702, they were governed by ‘Ethiopians and Blacks amid dirt and ugliness with the outcasts of the world, Jesuits, merry Andrews,’
No that wasn’t the Daily Mail, or David Starkey, but it all sounds very familiar….
So what could be done? The lower classes, even those not idle but apprenticed, were often involved in disorderly behaviour and crime was rampant.

Uncover Their Faces!
The government were scared of the lower orders dressing up (or down, as beggars) in order to commit crime and so, in 1723 the Waltham Black Act, disguising was made an offence.


How about locking them up? Bring back Workhouses! Take away their benefits!
Well, John Freame, Governor of a Quaker workhouse said ‘therefore we should endeavour to break their Wills whilst they are Little, and as soon as ever make them sensible that Their Wills ought to be entirely subjective to ours’
Matthew Marryot, a Buckinghamshire Magistrate, who planned to make his fortune out of running workhouses, wrote in 1730 that ‘The advantage of the workhouse to the parish does not arise from what the poor people can do towards their own subsistence, but from the apprehension the poor have of it,’


Hanging’s Too Good for Them!
Well, it didn’t dissuade the hundreds and thousands who danced the Tyburn jig every year, for stealing cutlery and bed linen, sodomy or by killing their ‘rude and foul mouthed’ apprentices or masters or mistresses, or who smothered their children either by accident or design, or indulged in a bit of Quantatitive easing by coining, or ‘socking’ away some of the tobacco that came in on the docks…. The list of crimes that might warrant the death penalty was a very long one.


Get Rid of Them!
I suppose this is the one route that’s closed to us, In the 1700s, you might be transported to work as a slave in the American colonies, or the West Indies (early slavery was an equal opportunity option) for a finite number of years. This was a popular choice, there was a small industry in shipping these unfortunates across ‘The Herring Pond’, and the traders could make £10 per convict when they sold them in Virginia, if they were healthy. Later on in the century of course we used Australia as a kind of massive open prison.

Since we have no undiscovered lands we could revert to Prison Hulks, or floating slums. This option was referred to presciently in Alan Moore’s wonderful dystopian fantasy The Ballad of Halo Jones, 1984, where dole scrounging youth and other members of Britains’ ‘sick society’ were farmed out to a space stations known as The Hoop.
I suppose the closest equivalent might some kind of enforced labour, but if they’re sweeping streets, the folk who are doing it now will lose their jobs.
What can we do?
I don’t have the answers. I don’t know how to make a bad ting good, but I do know if people feel demonised they tend to act up (or down) to it and do I know that you don’t get riots in Chipping Norton (or South Ken).
A peaceful summer to you all!
Posted by Catherine Johnson at 08:51

What an absolutely brilliant post. I'll be sending the link to this to as many people as I can today. Wish I could send it to David Cameron...

Thank you. This absolutely brilliant. I suggest you send this to one of our worthier newspapers in order to counter the recent post-riot riot of the great and the good rushing into judgement and blaming everyone else.

Brilliant post, very much enjoyed reading it. Thank you.

I've been hoping all week that someone was going to put the current troubles in an historical context on HG and this was perfect, Catherine. If Hogarth was still around I know what he'd be drawing. I hope your post is read widely.

And I love a quote Alison Debenham posted on the History Girls Facebook page:

"What is happening to our young people? They ignore the law. They riot in the streets. What is to become of them?" - Plato 400 BC

Fascinating post and good to see Caroline speaking Hebrew too!

Thanks Catherine. Good to get some historical perspective!

Thanks for this excellent post, which gives such a good historical perspective.
In fact, deportation is not only still an option but it is all too regularly used. Here is a summary of a note I received this morning, which explains this continuing practice:
"...any foreign national, convicted of a criminal offence and sentenced to 12 months or longer, is by law automatically served with a 'Notice of intention to deport' and deportation is now usually carried out.

"Even those foreign nationals in the UK, who have acquired or taken out British Citizenship (naturalization) are not exempt. Acquired citizenship is not an innate right it is a licence and can be revoked by the Home Secretary if she deems a persons conduct has not been conducive to the public good. She now routinely revokes acquired citizenship for any and all offences with a sentence of two years or more.

"So to be clear, any foreign national, convicted of rioting etc and sentenced to 12 months or more, will be subject so a secondary punishment - Deportation.

"This secondary or Double Punishment should be vociferously opposed."

My son has told me I am guilty of,as G.W. Bush put it 'misremembering' in THE BALLAD OF HALO JONES, the Hoop, is not in space, but rather tethered out at sea, a future hulk, like a vast awful shopping mall you can't get off.