From Family History to Fiction

Following Barbara Mitchelhill's excellent and interesting blog about finding 'a special air-raid shelter', I'm also going to blog about writing an incident during an air-raid - but it is something completely different, I think. 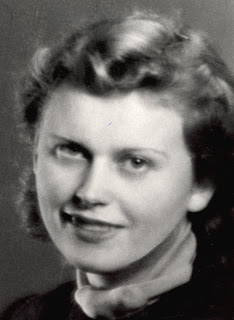 When I was in my teens, my mother (pictured here) told me a story that I remember thus; she was in Berlin, during the war, when there was an air-raid, and she was sent to take shelter in the cellar of a hotel. The hotel caught fire, and they were trapped. Because it was very hot inside there, 'they' broke into the wine cellar to get something to drink. My mother described a scene of champagne corks popping, and people getting drunk, very quickly, because they were dehydrated, and starting to dance with each other. 'But then,' she said, 'we were dug out.'

In her memoir (Shadow of War, Gerda Erika Baker, published by Lion, 1990) she tells the story differently: here she says: 'Someone from somewhere gets wine into which we dip our handkerchiefs, which we then hold over our mouth and nose.'

Now I could suppose that she wrote down the true account, and that I had remembered it wrong. Maybe I did. On the other hand, my father gave her extensive feedback while she was writing the book, and he didn't like her to put in anything that he saw as 'unseemly.' In another place in her memoir, she appealed to me and I told her to ignore my father, but here, my feeling is that she submitted to him. She had experienced a lot of horrific stuff and his ring-fencing of what could be described may have given her a sense of safety. I don't know. One thing is sure; she never in her life went back to Berlin, and when I talked to her about my visits to the city, she just switched off. She didn't want to hear about it.

Anyway, when I saw that she hadn't written the story, I thought it was mine, though I waited for quite a long time before I decided to use it in Saving Rafael. But then I had to start working out how the whole thing might be possible. The first issue was that people didn't get dug out when buildings were on fire above them, and, having chosen the first really heavy raid on Berlin for the episode, I could nowhere find any references to fire-engines operating during air-raids. People went into blazing buildings to get as much of their stuff out as was possible, but that was different.

I had two sources which proved invaluable. One was a German dvd called Luftangriff auf Berlin (Air Attack on Berlin) and the other was a book entitled Berlin im Zweiten Weltkrieg, (Berlin in World War Two) edited by Hans Dieter Schäfer.

The dvd gave me many of the scenes that I have described in Rafael, the people pushing their belongings along blazing streets, weeping; the charred rigid corpse being brought out of a ruined building. And the useful and pragmatic air-raid precaution that must have saved many lives in the capital. A civil defence newsreel shows people making escape hatches between neighbouring cellars, then roughly walling them up again, bricks in front of a wooden gate. In the book I found an account of a couple whose apartment, in Charlottenburg, was on fire, making their way through cellars to safety using the 'Durchbruch' which means 'the breakthrough.' Having seen the dvd, it was clear to me what the Durchbruch was.

So then I had to imagine why they'd be trapped in the cellar - and indeed, why my mother might have been trapped. The building next door had to have been hit, and there had to have been enough damage to block the Durchbruch. Then the people would have to dig themselves out. That would hold everyone in there long enough for the episode with the champagne to happen. I decided to give them music, too. I'd watched the appalling Zara Leander, a Swedish actor who became the idol of Nazi film, in the schlocky Die Grosse Liebe (The Great Love) - a film whose hero, incidentally, is a nasty bully who demonstrates very effectively what kind of man was officially admired at the time. The appalling hero and heroine of this movie make each other's acquaintance properly during an air-raid, and the shelter, underneath her luxury apartment block, was the one I reproduced beneath the luxury hotel in Rafael, with sofas, lamps, and a wind-up gramophone in case the clients got bored.

It took a lot of thinking through, to match the fiction and the original story to historical probability, but it was worth it. After all, why make it up when the facts give you such wonderful images? I think that does say something about my kind of historical fiction - I could make it up, I have enough imagination - but to me, it's also a fascinating imaginative challenge to do what I have just described. And to imagine what it felt like; the smoke in your nose and throat, what it's like to be so close to death - one must feel numb and terrified by turns - and how it feels to be dancing, with the person you love (who's a Jew, though none of the people there know it) - and maybe that's the last dance and the last time you'll be in each other's arms.
Posted by Leslie Wilson at 08:00

Fascinating blog, Leslie. And I totally agree: there is so much in history that you "couldn't make up", so why not use it?

Absolutely - and the most fascinating thing, maybe, is your mother's varying accounts of her experience - the oral tradition you remember, and the written-down version which may be less accurate - yet how we depend on written-down versions! Gives one to think.

This is fascinating on so many levels. The story itself, for starters. Your writing & research process, Leslie. And then the intriguing story of the difference between your mother's oral and written versions. I'm particularly struck by your suggestion that your father's 'ring-fencing' may have given her a sense of safety... How difficult it must have been to write down traumatic experiences for public consumption, wondering perhaps if you would be judged in ways (I'm thinking of seemliness) that I doubt writers (in our culture at least) would worry about now.

That is very interesting indeed. My mother was asked to write an account of her life by my sister. She did it reluctantly. It is brief and she claimed it was "factual". Her memory of what happened for the portion of her life that I and my brother can remember is very different from ours. Interestingly my sister decided not to read it at all. I know that some it is due to my mother not wanting some of her memories to be committed to paper but even things that do not matter - such as the colour of a car - have been changed. It is almost as if she wanted to be someone else or wipe out a record of herself.

Lovely blog, Leslie. Doesn't it illustrate how attitude's change over the years? The story of your mother's 'party' in such terrible circumstances would have been relished today.

I so enjoyed reading your blog this morning, Leslie. Every storyteller adds something in the telling but I loved your mother's cork-popping version. You give a real sense, here, of the satisfaction you got as a novelist in trying to get to the truth of something through fiction, through a combination of factual research and imagination. And, after Emma's blog yesterday, I think your last paragraph is a great comment on why historical fiction is so compelling.

P.S. what a lovely picture of your mother.