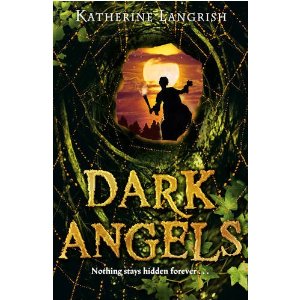 by Katherine Langrish
My fourth book, ‘Dark Angels’ (US title ‘The Shadow Hunt’) is set very precisely in both time and space.
In time, it’s set in the year 1195, four years after King Richard I, one of the leaders of the Third Crusade, committed one of the great crimes of history by ordering the massacre of as many as 4000 Muslim prisoners – men, women and children – when the port city of Acre surrendered in July 1191 after a bitter two year siege.
I chose this period because the hero of my story, young Wolf, is running away from a monastery where he has been a child oblate.  Up on the mountains of the Welsh border he meets a Norman Marcher lord out hunting wolves. Lord Hugo de la Motte Rouge (Hugh of the Red Mound) is a crusader and troubadour, a romantic but deeply flawed figure marked by terrible grief for his beloved wife’s death – but also by his participance in the massacre at Acre.  Ignorant of this, Wolf hero-worships Hugo and is delighted to be taken into his service – but when the pair of them discover a mysterious, disfigured elf-child, Wolf’s feet are set on a path which will take him deep into the shadows.
In space, the book is set on and around the sinister, atmospheric Shropshire hill in real life called ‘Stiperstones’, but in my book renamed ‘Devil’s Edge.’  I set the story in the Welsh Marches (a) because I love hills and writing about hills, (b) because the Marches were and still are a wonderful mix of contrasting and sometimes clashing Celtic and English cultures and (c) because so many of the supernatural stories and legends of the time seem to be set there, from Gerald of Wales’s ‘Journey Through Wales’ which he undertook in the year 1188 with Baldwin, Archbishop of Canterbury, to drum up support for the Third Crusade, to anecdotes in Walter Map’s lively ‘De Nugis Curialum’ (‘Of Courtly Trifles’), written about the same date.
So off I went to Shropshire, along with my husband (who thinks my business trips are far more fun than his), armed with a notebook and camera.  We stayed, in case anyone is interested, in the quaint little market town of Bishop’s Castle, and we tramped over Stiperstones in rain, in mist, and in sweeping wind.  We visited a wolf sanctuary set in a narrow little valley – it began to snow as we descended the steep track, and I’ll never forget the snow falling precipitously past the dark serried ranks of fir trees, and the wolves howling in the winter landscape.  We climbed the grassy mound which is all that’s left of the 11th century Montgomery stronghold of Hen Domen – the motte and bailey castle replaced by the stone fortress at Montgomery.  Neither was right for the filming since the castle in my book, la Motte Rouge, is an already-out-of-date fortified wooden building: in the end we chose the oldest parts of nearby Stokesay Castle.  And on a later trip, courtesy of a Shropshire mining and caving club, we crawled into the tight dark passages of an abandoned Roman copper mine, which was to become the entrance to elfland in my book. (It’s called Ogof Llanymynech and may go as far back as the Bronze Age: a hoard of Roman coins was found there in 1965).
All this before a word of the book was written!  And so the landscape of my story is a patchwork of real locations pieced together, recognisable as the Welsh Marches, but renamed and reshaped so that I had the freedom of fiction as well as – I hope – a sense of real history and place.
And – finally – two years after ‘Dark Angels’ was published in England, a year after it came out in the States – we’ve made the trailer ourselves: nothing to do with my publishers although I hope they’ll be happy with it!  Writing the script was almost like composing a poem: distilling the essence of a 65,000 word book into 100 words… And discovering the difference a split second here or there can make to timing and impact.  Anyway, here you can see all the elements I wove together in the book.  The stark skyline of ‘Devil’s Edge’, the rough moorland, the lonely castle, the claustrophobic darkness of the mine. Listen carefully and you may even hear wolves...
My thanks go to Richard Hughes of We Are Goose who composed and performed the music, and cut and edited the film. Making this trailer was a labour of love – and swept me right back into the wild and beautiful world of the book. I’m hoping it may do the same for others.
Posted by Katherine Langrish at 07:28

Incredibly atmospheric trailer. Should do wonders for sales. Only criticism is that I didn't get as much 12th C as I expected. Tremendous example of how marketing is moving into the author's realm. The downside of which is how do you find the time to write the books?

Will, thanks! I'm thrilled you like it. There was a limit to how much 12th century I could find which was relevant to the book - and cram into 2 minutes - and of course, we had no actors or financial resources. But you'll find plenty of the 12th century inside the book! :)

And yes - time for writing IS an issue!

I just hate the way that our US friends decide that they are going to retitle a book.

This is the kind of trailer that puts a book straight on the shopping list. It is fascinating to hear how you distilled the necessarily brief lines you needed to plot a dynamic video without dumbing down the book. This is a whole new skill base for a novelist - working with moving images and music to supplement the words on the page, yet never forgetting the primary importance of the words. Congratulations - it's all worked beautifully.
x
m

This is a wonderful trailer, Kath. You are clearly a gifted movie director too, if given the chance. Will make loads of people go for the book which is EVEN BETTER. It's a fantastic book and deserves to do very well. Harper C should give you a medal.
ps. I do think PUBLISHERS, though they may not do it as well as Kath, ought also to be thinking of ways to promote their writers in this way. HC must have greater resources than individual writers to enable them to undertake such things, no?

I love it! Has it helped book sales?

Thankyou! Caroline, I don't know - it only went up this morning! Of course I hope it will!

HC might have greater resources, Adele, but would they do it as well? Small resources enforces simplicity, and - well, less is often more.
Great trailer for a great book. The book has a lovely eerieness - which as M R James, the master himself, pointed out, is much harder to do than horror.

You inspire the rest of us, Kath! Bravo!

The way you distilled down elements of the story into bite-size pieces that went with the lovely images was terrific. I particularly liked the line: "Once every seven years Elfland pays a fee to Hell..." Congratulations, Katherine, I loved it. Here's hoping the trailer wins you many new readers.

Brilliant Kath! Loved the music and have always believed writers make good film directors as we think so visually. I know it was a lot of work for 2 minutes worth but am sure you enjoyed every moment. I've always thought we need a video clip workshop at Charney. I've done a clip from stills but not from video and not with such special music. Hope the book sales fly! Great work!

Brilliant - I was going to do one myself and this is just perfect!

Cool trailer, Kath! (and now I WANT TO READ IT).

I wonder why authors have to do this kind of thing by themselves, though? Surely a big publisher like HarperCollins can afford to make a trailer to help sell the book? After all, they make money from book sales too...