Two into one won't go 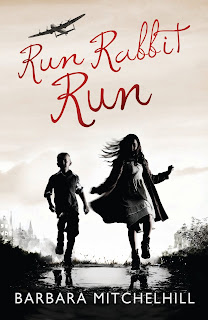 Writing is never easy. Often in the middle of creating a book, you find that you need to bring a certain object or a new setting into a story. Something a little bit out of the ordinary that would appeal to children.
This happened to me while I was writing Run Rabbit Run which is set in World War Two. I was well on in the book, having already done lots of research before starting. The story was progressing nicely. My characters had already run away from home, had been separated from their father and now I was about to send them away as evacuees. It was at this point that I thought they should experience an air raid and head for the safety of an air raid shelter. (Isn’t it wonderful being able to manipulate people like that?) I needed to describe the shelter but I didn’t want to write about an ordinary one. I wanted a special, interesting, memorable shelter. There must be some, I thought, although I had only seen small Andersen shelters made of corrugated iron or, worse, brick-built rectangles. They would not do.
Then, after searching for a solution, two came along like proverbial buses in the space of one morning.
Solution number one arrived when a neighbour suggested that I meet her old friend, Joy, who was coming up from Wales to stay for a few days. She had lived through the war and had great reminisces. I would find her very interesting, she thought. So I happily agreed to meet her the next day.

Solution number two came minutes later during a conversation with a friend. She’s the kind of friend who obligingly listens to problems of any sort and has the knack of coming up with solutions. Hadn’t I heard about the Air Raid Shelter Museum in Stockport? she asked. Marvellous place. Well, no. This was the first I’d heard of it but I was anxious to see it and that afternoon, I jumped in the car and drove fifty miles north.
The Air Raid Shelter Museum was in a narrow street in the middle of the town. From the outside it was decidedly un-impressive but the inside was very different indeed. This was no modest shelter. This one was huge. A mile long labyrinth of passages hewn out of the sandstone hills on which Stockport stood, providing shelter for an astounding six and a half thousand people. The locals called it the Chestergate Hotel. The passages were lit with electric lights and, if you got there early, you could grab one of the metal bunk beds. There was even a medical room lined in sheeting to prevent dirt falling off the rock and onto the sick.

But without doubt, the Jewel in the Crown was yet to come. (Sound the trumpets!) Around a corner, I found a row of toilets. Sixteen in all with a constant flow of water in an open pipe beneath. I couldn’t believe my luck! Toilets are incredibly popular with children and, if that weren’t enough, these came with a story. The guide told me how sometimes the children would play tricks by blocking the pipe at toilet no 1 so that the water built up, finally bursting out in a mini tsunami, drenching the backsides of those who were sitting on toilets 2-15 at the time.
I drove back home happy that I had found my special shelter.
The following day, Instead of working on Run Rabbit Run, I went to meet my neighbour’s friend, Joy. She turned out to be a delightful, garrulous Welsh woman in her seventies.
‘Shelter?’ she said, when I broached the subject. ‘Oh no, we didn’t bother with the shelters in the war. We all went into the old mine, see.’
She began to tell me how, when the air raid sounded, the children would run to the cave-like opening of the old coal mine and pile into the waggons which their parents would push along the rails into the hillside. Once well inside, the mine opened out into a cavernous space which the villagers, mindful that they would have to spend time there, had made comfortable with sofas, mattresses, old carpets and chairs. They lit it with lanterns and passed the time singing or playing cards or reading.
‘Great fun it was,’ said Joy. ‘Like home from home.’
Now I had two wonderful shelters for the book. Which one did I chose? It was a close call but I went with the fully furnished coal mine in the end. I shall save the story of the interconnecting toilets for another time.
Posted by Barbara Mitchelhill at 09:00

Bottom-wipers, now toilets - what is this blog coming to??? But thanks for a great post, Barbara. That's so true about being spoiled for choice with settings, and is probably one of the reasons we just have to keep writing one more book...

A fully furnished cavern sounds preferable to an Anderson's shelter any day. Your story reminds me of the great cavern in the Blue John mine in Derbyshire where Victorians would host dinner parties - though how ladies got down there in their crinolines I can't imagine. But what a great stroke of luck to come across your neighbour's friend. Fascinating to learn about the toilets at the 'Chestergate Hotel', too.

Cool! I like it.
I just read loads of first-hand accounts when I was writing about air-raids, clearly I missed out on something there!

What a fantastic & fascinating post. I do love the story about the children's game with the inter-connected loos... I think because it is such a striking example of how children have such a great capacity for finding fun anywhere given half a chance, even in what is (to adults) a grim and potentially fear-filled place. (Not to mention the perennial fascination with toilets!)

So interesting. I would have chosen the coal mine too. There was just one delicious detail too many to be resisted.

How wonderful to read your comments. I was in such a tizz thinking it would be a terribly boring post. The history girls are such a talented lot, I feel very inferior most of the time.