TALES OF THE PAST: Penny Dolan.

The drive was always a kind of journey into the past. The road leads up and along a ridge of moorland, skirts the reservoir that sits like an overfull saucer above the Aire Valley and its sprawling industrial towns. Eventually, the route drops down steeply and joins the old level road, now edged by pebble-dash semis, occasional newsagents, tyre fitting services and one room hairdressers.
I turn left through open gates and there, fronted by a large pond - treacherous in snow - stands a seventeenth century manor house. This is East Riddlesden Hall, owned by the National Trust and where, occasionally, I told stories to young audiences. 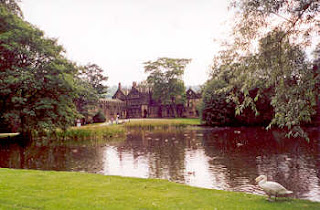 Well, what does one tell for such a gig? The problem with history is that real life stories often aren’t story-shaped, as all writers of fiction know, and there were experts in the house who could describe all the objects better than I could.
I had read guidebooks on the property, but I also spent ages wandering around the Hall musing and imagining, trying to find objects that interested me, and to work out what, for children, was different “then”. What would develop historical awareness?
The venue itself wasn’t the easiest to clothe with children’s tales. East Riddlesden Hall was built by James Murgatroyd, a wealthy clothier, in 1642. Although there were Royalist symbols on one of the walls and a priest’s hiding hole, the family also became known for “profanity and debauchery”.  The Hall is said to be the inspiration for Gilbert & Sullivan’s gothic opera “Ruddigore”, and is haunted by the ghosts of several wives, lovers and visitors who met sad or violent ends.  Not quite light fun, and in practice, one ghostly story per family session is enough. Small horrified faces at one’s knee are worrisome as are outbreaks of bawling. Ghost stories needs both shaping and rationing.
So I chose and adapted tales that highlighted some aspect of life at the time, embroidering the tales with emphatic historical descriptions. I included the blowing out of candles and lanterns; the turning of spits over the fire and the weary back from crops that must be planted and gathered; I gestured the gathering of herbs, flowers and fevers; the putting on of fur-lined cloaks and shawls, of gloating over petticoats and finery; I listened for horses, carriages or carts, and ordered servants, true or mistrusted, to bar the door against the dark.
My tales, however, were mostly folk tales.  The Hall contains important embroidery and fabric. So I chose The Three Spinners - a variation of Rumpelstiltskin - where the plot works out extremely well for the reluctant bride. As a clumsy child, I adored that tale and the three ugly aunts.
I offered Mossycoat, where the mother races to stitch the daughter a coat in time for her to escape from the dreadful pedlar, even as she steals all the fine dresses he’s brought her. No quick trip to Top Shop for that young Mossycoat.
Occasionally I used a tale that might have been heard in the house:  the bold brave Molly Whuppie. Her retort to the Giant “Once more, twice mor, I’ll come to Spain,” always suggested the time of the Armada, when England was at war with Spain.
I did make my own variation of the Riddlesden “ghostly rocking cradle” legend. The ailing mother lies alone in her four-poster bed, the house emptied of servants by sickness, but is calmed by seeing her child’s cradle rocked by a mysterious old lady who she takes to be her absent husband nurse.  A kindly ghost felt omewhat happier for young listeners than a spooky stranger by the bed!
If the group seemed older, I might mention the need to check who it was your family wanted you to marry, moving into another favourite tale, Lady Mary & Mr Fox. Somehow, the hints of gambling and new money always make it feel very “Restoration” to me.
There was always the fun of telling the story of King Charles escaping by hiding in a big tree, which might have been a little like the one we were under – and then I’d watch their eyes look upwards.
There were other stories of course. I always tried to introduce each one by referring to some item or place in the house, making it clear that what I was telling were “only fairy tales.” 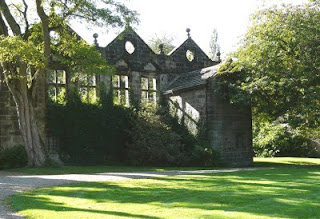 The original idea was to tell stories at different points in the house. However some rooms and staircases were so small that regular visitors found it hard to squeeze past the bundle of children and parents. Besides, one or two of the volunteer guides also felt the enthusiastic tales disturbed the ambience of “their” rooms. So I was moved outside.
During spring and summer visits, I told stories out on the lawn, under the huge mulberry tree.  The weather was always uncannily good, as if it was an enchanted garden. I carried my small basket of props, my storytime bell - of a size to be heard anywhere in the garden – my notice board, giving the session times and settled myself on the broad bench ready to start.
I spent a few magical times there, including Halloween tellings in the big tithe barn. Then one autumn, the lovely lady who organised my story-times moved to a distant site. A new person took over that post, and from then on, invitations came there none.
I believe I was supplanted by someone dressed in an overlarge “character” costume. So very much more believable than stories.
Posted by Penny Dolan at 12:03

Your post is safely up, Penny, after all the alarums and excursions and I will now read it!

Magical, Penny - thank you. And sorry, but a person in overlarge character costume can never be a substitute for a teller of tales.
And most of all thank you for pointing out that history doesn't naturally come 'story-shaped'. I'm glad of it, in a way, or it would leave us little to do, but there's no doubt Fact needs a very good editor.
I hope you'll go back to East Riddlesden Hall, because you've so made me want to visit and it won't be the same without you.

Good to see your blog posted. How wonderful to walk round a place like East Riddkesden Hall with a story teller. Lucky audience. It sounds quite magical.

Marvellous - I wish I had been there to hear you!

My long suffering children were "dragged around" National Trust properties so often when they were younger - how easier it would have been to keep them amused if there had been more Penny Dolans with a magical storytelling bell. Beautiful house, by the way.

Have you ever thought of putting the stories you told into a book, either a volume of short stories or one novel? (Not to dismiss the ephemeral charm of storytelling, but we'd love to read what you came up with!)

Ah Penny - I share your love of 'Mr Fox', and I know so well that reservoir above Airedale! Wish I could have heard your stories...

What a lovely gig Penny, I love being told a story,

Those must have been unforgettable sessions for all who heard them. Wish I'd have been there.

Thank you for all your comments. I enjoyed revisiting the stories and the place while writing this post.

They were lucky to have you and idiots to drop you! May they come back on bended knee, is what I say.

Ah Penny that's a very sad story and I think East Riddlesden Hall is an emptier place without you. Just reading your post made me long to be there and to experience you as the embroiderer of so many tales. In fact you turned your post into a 'textural' weaving - both in texture (as in feel and atmosphere) and in words.

Great post, Penny. I don't think there are any storytellers at ERH at the moment. They advertised ghost stories around Halloween two years ago but they never answered the phone on the booking line. Sad!

I was trying to find that Mulberry tree, where exctly it is, please?