THAT MR FRED VOKES AND HIS LEGMANIA

Fred Vokes 1846-1888
With it being almost December, we are fast approaching the height of the pantomime season - a tradition almost as popular today as it was in the nineteenth century when true spectaculars were produced.


One of the enduring thrills for a Victorian theatre audience would be the pantomime dancing acts - the chance for some mild titillation when viewing a shapely female leg where the glance of an ankle in everyday life might well  be considered outrageous. But such 'artistic' stage antics were not limited to the female of the species and, year after year in the Drury Lane theatre, where pantomimes drew in enormous crowds, the star was Fred Vokes and his Legmania.

Fred is on the far right of this picture
Fred was born into a theatrical family, very famous in the 1870’s as a dancing, acting, singing troup that comprised of three sisters, one brother, and various 'adoptees' who joined and then took on the family name. Fred was by no means the most talented, but he did excel in achieving great feats of contortionist dancing and so very impressive were his moves when appearing in Humpty Dumpty that a Daily Telegraph critic wrote that he -


‘...dances as few men in this world probably could dance or would wish to dance. The extraordinary contortions of limb in which his dancing abounds – contortions which in Mr Vokes’ hands – or rather legs – are not lacking in grace – are highly suggestive of the impossibility of his suffering at any time from such accidents as dislocations.’ 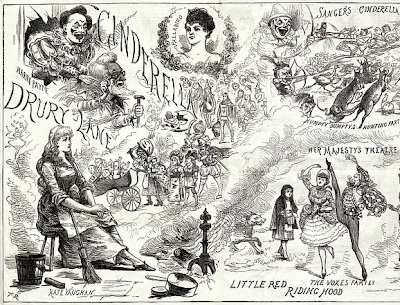 View Fred in the bottom right of this poster and you might imagine how the journalist from The Telegraph was concerned about dislocated bones.
A review in The Times in 1871 that followed a visit to Tom Thumb; or, King Arthur and the Knights of the Round Table was particularly enthusiastic and gives a good sense of the ‘mania’ that was then abounding for Fred and his versatile lower limbs -
‘The manner in which first the crown and then the wig of Mr Fred Vokes as King Arthur persisted in tumbling off while that monarch indulged in unusual gyrations excited tumultuous laughter, and if there could be anything funnier than Mr Fred Vokes’ ‘split’ dance it was his step dance, Lancashire clogs, Cornish reels, transatlantic walk-rounds, cellar flaps and breakdowns, college hornpipes and Irish jigs. Nothing in the way of dances came amiss to the airy monarch whose legs and arms seemed to spin round on pivots and who seemed at once to stimulate the actions of the cockchafer and the grasshopper.
He was well assisted by Mr Fawdon Vokes as the court fool who had apparently danced himself out of his mind in his infancy and had lived on tarantula spiders ever since. All the Misses Vokes (Victoria, Jessie and Rosina), fasincated in their attire, ravishing as to their back hair and amazing in their agility, were fully equal to the occasion. When they didn’t dance they sang and danced simultaneously and then all the Vokeses jumped on one anothers backs and careered – so it seemed  - into immeasurable space.’


Goodness, that reporter was impressed! But all good things must come to an end, as did the Vokes' run of success when the Drury Lane theatre changed management and even though Mr Augustus Harris' new pantomime productions were bigger and better than ever before he regarded the Vokes family as being unruly, too demanding and powerful by far. In return they considered his management style to be tyrannical, and so the family business moved on, continuing to perform in theatres elsewhere although several of them, including Fred, died while really still very young.
But, as we all know, the play - or in this case the dancing - must go on. Fred might have mastered the step toe and clog dance but as the century progressed others diversified yet more, as in the case of Miss Elsie whose routine had the added benefit of being performed on a snare drum. The picture below is taken from the Victoria and Albert museum's archives and is dated as being late 19th century. Even so it looks particularly modern, immediate and full of life; somehow more reminiscent of jazz clubs in the 1920's. 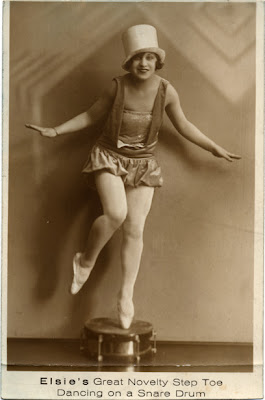 Just as popular were the lady 'skirt dancers' whose dances were performed by gracefully manipulating several yards of fabric. And as less expertise was involved in the 'art' it soon became a domestic hobby, performed by female family members in many a private drawing room. There were even instructions printed up the press - such as these from The Daily Graphic in 1892 - 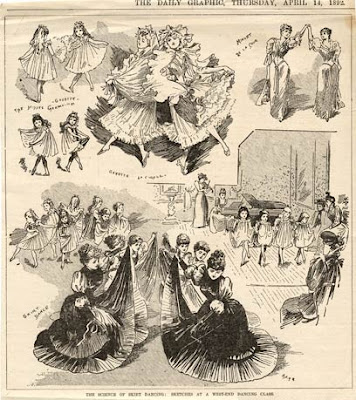 Miss Topsy Sinden was particularly alluring. And when Miss Letty Lind took her dancing act to America in 1888 the audiences were astounded to witness such demure performances - not an inch of bare leg or bosom exposed. 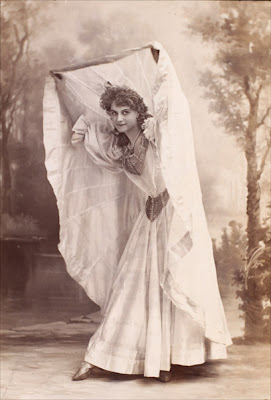 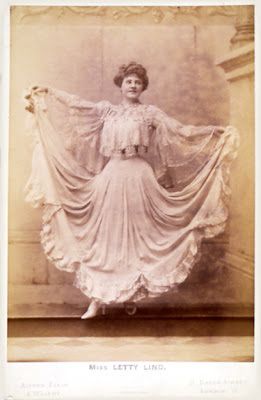 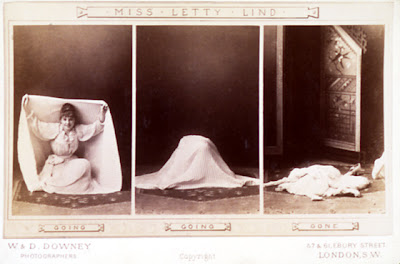 Miss Letty Lind's Skirt Dance - 'Going...Going...Gone!'
Such slow and quiet acts may have appealed for a little while but an audience loves variety - and an audience loves excitement - and what more sensational form of dance than the one that evolved from the skirt dancing form when Lottie Collins achieved great fame performing her 'Ta-ra-ra-boom-de-ay', a routine that began traditionally with muted strains of music and the gentle swishing of fabric, until the first chorus had come to an end when Lottie would pause, place one hand on her hip, and then lift her skirts and lace petticoats high, commencing to kick the 'can-can' - a dance that is still performed to this very day, and one of which I feel quite sure Fred Vokes would warmly approve. 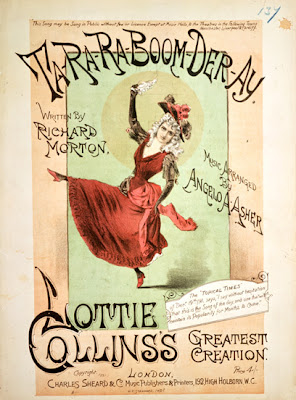 Essie Fox's novel, 'The Somnambulist', features scenes in a Victorian music hall - though, regretfully, nothing quite as daring as the performance of Mr Fred Vokes.
Posted by Essie Fox at 00:01

This is fascinating and wonderful. As you say, Miss Elsie looks like a 1920s performer - I'm astonished that that photo is so early. My favourite has to be Fred Vokes, however, and the comment that he 'dances as few men in this world probably could dance or would wish to dance.' That's splendid! Makes me think of the Crummles family & the Infant Phenomenon in Nicholas Nickleby.

I think this post is BLISSFUL! The photos are outstanding and the one of Elsie on the snare drum wouldn't look out of place in Fortnum and Mason's Christmas windows....anyone who can should go and have a look. They are miles away from Santa Claus is all I will say.

P.S. Was Miss Topsy Sinden an ancestral relation of the great Sir Donald, by any chance?

Thank you! It would be wonderful if Topsy was related to Donald wouldn't it.

As to Nicholas Nickleby - I confess I have never read. This must be rectified!

Oooh, lovely post. I feel tempted to learn a little swishing-of-silk skirts dance and perform it after Christmas lunch.

Do, do, Mary! It's me again (apologies) only to urge The Virtual Victorian to watch (if you haven't already) the famous RSC stage adaptation of Nicholas Nickleby (available on DVD) with Roger Rees as Nicholas & David Threlfall (utterly brilliant) as Smike. An astonishing production.

Thank you again - I'm off to google that production RIGHT NOW.