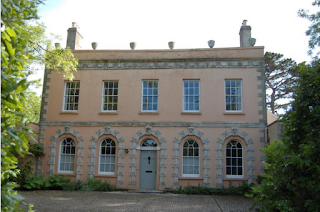 I learned very little about the 18th century at school, but what I did learn left me with the impression woman had rather taken a back seat throughout the century and concentrated on their embroidery until, well until about 1960, frankly. It’s been one of the pleasures of researching the Westerman and Crowther books to discover more and more women who were active in science, in politics and in literature during the period. My latest heroine is someone who left behind very little in writing but is nevertheless an extraordinary example of a woman who succeeded in business when such a thing was seen as all but impossible. Mrs Eleanor Coade, inventor of Coade stone.

The Landmark Trust are currently fund-raising to restore her former home, Belmont, in Lyme Regis. It was for many years the home of John Fowles which is reason enough to contribute to the campaign, but it was the connection to Mrs Coade that caught my eye, and the beautiful decoration of the house she left behind. ‘Mrs’ was a courtesy title, she never married, but she left at her death a thriving business manufacturing this artificial stone which still decorates many major landmarks in London and the beautiful Belmont itself. Just to underline that; this was not a widow who inherited a business, but a single woman. Remarkable. 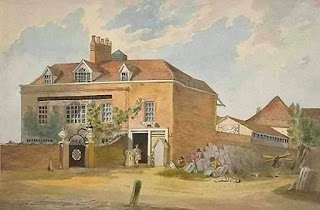 I learned more about her and her business on Tuesday this week when I went to hear The Landmark Trust’s historian, Caroline Stanford, talk at the Society of Antiquaries in central London. Now I am spotting Coade stone all over the place, dressing up with keystones and other exterior ornaments the regular, elegant lines of Georgian London. Eleanor was born in 1733, the daughter of a wool finisher who, it seems, moved to London after his first bankruptcy in 1759. Eleanor was already in business as a linen draper before her father died ten years later, but after his death she bought an artificial stone business at Kings Arms Stairs, now the site of the Royal Festival Hall. She turned this struggling enterprise into a startling success. Caroline Stanford has investigated exactly what Mrs Coade’s stone was and how it was made. A mix of ball clay from Devon, pre-fired material, crushed flint or quartz and soda lime glass was moulded and then fired. It seems Mrs Coade owed her success not to any particular magic formula but rather to the quality of the work she produced. It looked beautiful and was expertly finished. She also had an eye for talent, employing John Bacon as a sculptor. It was he who designed the River God you can still see looking out over the gardens of Ham House, and you can see the quality of the detailing possible with Coade stone on this close up.

It is Mrs Coade’s more modest contributions to London architecture I enjoy most though; the keystones, water spouts and ornamental urns such as the ones she used to decorate Belmont itself. Keep an eye out for them, the remarkable legacy of an exceptional woman. I wish Landmark Trust’s campaign every success.
Oh, and as I’m here (coughs, looks at shoes), the latest Crowther and Westerman mystery, Circle of Shadows, is out next week so you can expect blog posts on alchemy, freemasons and automata over the next few months. You have been warned.
Posted by Imogen at 01:00

I'd never heard of Coade Stone before, so now I shall look out for it too!

How interesting! And I love that River God.

Fascinating! She must have been a remarkable woman. Thanks, Imogen.

Well done, Eleanor! Will now feel more respectful when I see the words "Coade Stone" mentioned in notes for historic houses & grounds. Looking forward to those next blogs - and "Circle of Shadows."

Love this addition to my view of 18th Century women. I already knew about their role in education and science but great to see they were involved in industry too. Do you know about Caroline Herschel? Caroline made her own discovers in astronomy as well as assisting her brother.