Make your Loved One a Codpiece? by Barbara Mitchelhill 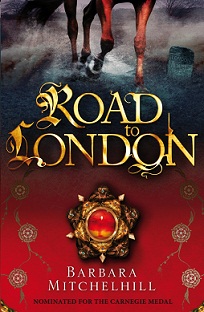 I decided months ago to make Tudor costumes to use in school events when I talk about Road to London.   I began with a girl’s outfit which was a delight to make. My female character, Alice, was a serving wench and wore several layers including a red petticoat.  I loved the petticoat - especially the fact that it was thought to have health giving properties.
In February, I started making the clothes for the main protagonist, Thomas, who was a scholar at the King's New School in Stratford-upon-Avon. 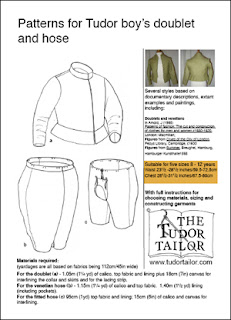 Making the shirt and the doublet was straightforward enough but when I can to the hose (trousers) it was a different matter.  With the pattern I had from Tudor Tailor, there was a choice of two - The Venetian hose or the rather racy fitted hose with a codpiece.  Mmmm.  I wan't so sure I wanted to make a codpiece.  In fact, I was surprised to find myself repulsed at the thought of making (and stuffing) one.  I knew it was just another part of his outfit after all.  But repulsed I was.

As it turned out,  I need not have worried.   I discovered that codpieces, which were at their height (no pun intended) during of Henry VIII's reign, rapidly declined in the reign of Elizabeth who tended to keep a tight control on what people wore.  As Road to London is set in Elizabeth’s reign, I felt that, in order to be historically accurate, my boy would wear the nice baggy Venetian hose.  Thank goodness.  Now I wouldn’t have to make that padded thing tied onto the front.

But the codpiece was not a Tudor invention.  Examples from the ancient world have been recovered by archaeologists in Crete and cutting guides for Renaissance tailors have also been discovered.
It seems that the codpiece developed out of necessity.  In the 14th century, men’s hose were simply two separate legs tied together at the waist.  This left a gap over the genitals which were covered by the linen shirt worn beneath.  When fashion changed and the hemline of the cote or doublet rose, they revealed thinly covered genitalia.  So, for the sake of modesty, something had to be done and a triangle of cloth was placed over the offending gap. 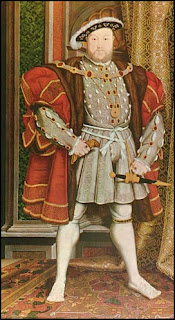 Once Henry VIII came to the throne, the codpiece became an art form.  It was exaggerated to amazing proportions. It was often stuffed with a padding called bombast – a word now used to mean pompous and pretentious. It was puffed and boned and slashed and sometimes heavily ornamented.  It became so large that it was often used to conceal a weapon or to hide jewels. (Hence a man’s genitalia being known as ‘the family jewels’.)  Armour at this time followed the fashion and metal codpieces were added to the best full harnesses.

I put it to you:  is 2012 the time to revive this article of clothing?  Should we think of embroidering a codpiece as a birthday gift for our loved ones?  Could it be in denim for the casual look? Or tweed for the grouse shoot? Or maybe a velvet one for those intimate dinner parties?  I’ll leave it up to you to decide.

Check out the video trailer for Road to London  HERE
Posted by Barbara Mitchelhill at 06:30

How absolutely fascinating! I've just shown this to my 9 year old twins who definitely DON'T want to have to wear codpieces. Thank you for revealing that new layer of meaning to the fantastic word 'bombastic'.

Lovely, Barabara! Especially the bit about the family jewels.
Have you seen Henry VIII's suit of armour at the Tower? It has its own built-in codpiece. Ironic that there was so much focus on that part of his anatomy when he was quite unable to father legitimate male heirs...

But why are they called 'cod' pieces?

I think this excellent post should be drawn to the attention of Victoria Beckham. David, bless him, does very well for Calvin Klein or Armani or whoever just in his pants but who knows, might be attracted to such a thing! I also love the way you say: "The doublet and jacket weren't a problem." For someone who can't even turn up a trouser hem, your achievements are deeply impressive!

Hear hear to that from me too!

Sorry, Anne. I'm ashamed to say that I don't know why they are called codpieces. Will do some research.

Thank you for the Beckham suggestion, Adele. Will drop him a line.

Thank you so much, Griselda. Such a clear, uncomplicated explanation.

Henry 8 a horrible pig of a man who smashed up so many beautiful churches, abbeys and priories. But hey-ho.