The White Horse of Uffington by Katherine Langrish

Not long ago, in the bright light of a half moon, I went up on to the Downs to visit the Uffington White Horse. This was an activity I discovered a few years ago, in winter – and believe me, visiting the Horse on a frosty winter night under a full moon is magic enough to make the back of your neck prickle. 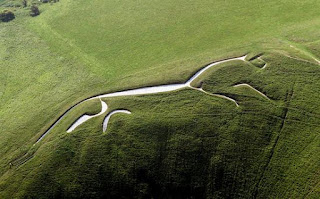 For those of you who don’t know it, or aren’t lucky enough to live as I do, in the Vale which bears its name, the Uffington White Horse is a prehistoric chalk figure, cut into the turf to expose the white chalk beneath, close to the Iron Age hillfort known as Uffington Castle which rings the crest of the hill above it – but a bit older, late Bronze Age - around 3000 years old. Nobody knows anymore what it was for or what it signifies, but the impressive fact is that it has been maintained by local people - continuously - for the last three millennia, by a process of ‘scouring’ it every few years: this involves weeding it, and pounding lumps of broken chalk into the outline to rewhiten it. Otherwise, the turf would’ve reclaimed it within a few decades. In historical times, a huge country fair used to be associated with this. Nowadays, the National Trust turns up every so often with piles of chalk and baskets of hammers, and asks for volunteers. I’ve had a go myself – there’s a bit of the upper foreleg which is forever mine – and the thumping of about fifteen or twenty hammers pulverising the chalk up and down the length of the figure as it curls over the shoulder of the hill (it’s far too big to see all of it at once when you’re up close) sounds weirdly like galloping hooves…


Some people say the Horse isn’t a horse, but a dragon. It certainly isn’t a realistic representation of a horse, but it’s very much like horses on early Celtic coins: the Celts went in for abstract, flowing lines, and I’d agree with Granny Aching from Terry Pratchett’s wonderful Discworld book ‘A Hat Full of Sky’: "Taint what a horse looks like, it’s what a horse be." 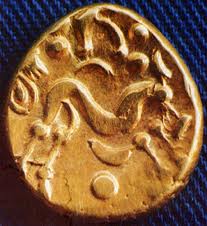 Anyway, by moonlight, the Horse glows. We walked over the top of the Iron Age fort (past the much more recent barrow where Roman soldiers were buried) and down the slope in the watercolour moonlight, in the teeth of a sweeping cold wind, and down towards the head of the Horse. It lay there on the dim hill, its great eye and strange, open parallelogram of a head glowing mysteriously, almost appearing to throw more light back to the moon than the moon could give. Its body swept in a serpentine line over the slope of the hill, away out of sight.

I would say I feel sure it was meant to be looked at by moonlight, except that I’m not sure. It’s hard to be sure of anything at all about the Horse. But I am sure that, intentional or not, once anyone’s seen it by moonlight, now or three thousand years ago, they’d agree that this is when the Horse comes into its power. I half expected it to lift its head, come alive and levitate off the hill. 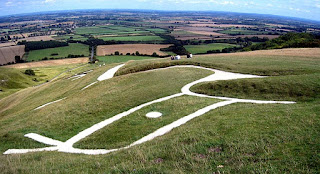 You'd think there would be scores of poems written about the White Horse of Uffington, but the only one I can find is GK Chesterton’s immensely long ‘Ballad of the White Horse’ (written when the Horse was still thought to be as recent as King Alfred’s victory over the Danes, and much more about Alfred than the Horse). I think these lines from the poem do still suggest something of the Horse's wonder and power.


Age beyond age on British land,
Aeons on aeons gone,
Was peace and war in western hills,
And the White Horse looked on.


For the White Horse knew England
When there was none to know;
He saw the first oar break or bend,
He saw heaven fall and the world end,
O God, how long ago.


For the end of the world was long ago,
And all we dwell to-day
As children of some second birth,
Like a strange people left on earth
After a judgment day.


Finally, here's a wonderful song about the White Horses of Wiltshire and Berkshire, written by Aidan McGee and posted on my brother's folk music website -you'll find the mp3 link at the bottom of the 'blurb' in the right-hand column beside the words. Aidan really expresses the weird magic of the Uffington Horse - the King of all the Hill Horses. Enjoy it!
Posted by Katherine Langrish at 07:30

The really eerie thing is that this animal (be it horse or dragon or something else)actually seems to be moving. It is absolutely marvellous and I have always been grateful to the person who went out of their way to show it to me.

Oh to see it by moonlight! Sounds wonderful, Katherine. I've seen it in the day time, some time ago. I love its fluidity, as if it's been painted with a brush by a master calligrapher. And how odd that it is best viewed from the air.

I know it well - the way it seems to drift across the hillside, like music.

(The Marlborough white horse - a few years ago the lads at the College decided to give it a very large penis. It appeared to have 5 legs. Its endowment has now grown over.)

And - next time you drift southwards, try wandering around Avebury at night. If only those stones could tell their stories!

A wonderful shivery post! A place made more magical by moonlight. Thank you.

Magical, Kath. I add my thanks to Penny's. Maybe the Charneyites should organise a moonlight trip?

Wonderful post, Katherine. I've only ever visited in rainy muddy daylight, and it was still magical and truly strange - but I must meet it by moonlight one day.

I was a young girl visiting relatives in England with him the first time my dad took me to see this. It was indeed magical.

I have loved it whatever weather I have seen it in but always by day.

Yes, Sue, it's a definite Charney plan! Are you going? I'd love to see it by moonlight. Thanks, Kath!

I assume you are aware that Rosemary Sutcliff's novel
Sun Horse, Moon Horse centres around The White
Horse of Uffington?

In her imagining of the origins of The White Horse, Lubrin Dhu, a chief's (third) artistically-talented son, seeks in his impermanent drawings the feel and the flight of the birds, or of the horses which are central to his people's economy. Invaders from the South, also horse people, invade and conquer. To protect the few who survive the siege, Lubrin makes a bargain with the new chief. He will create the horse on the hillside, and in return his people will be free to move on to other horse runs, further north. She refers to Lubrin's work as 'picture-magic'.

Ah, I remember walking up there! I've sat in its tail, but not by moonlight. Afterwards, I was inspired to write a novel about the white horses of Britain... but it didn't get past chapter 3, and later morphed into the fairy horses of Avalon, and so found its way into my latest series about King Arthur's daughter.

But I love that poem!

I've only seen it once, in about 1990, in a profound white fog so dense you couldn't see the slopes below or the sky above.

It seemed to float on cloud and under cloud.

Must go and have another look some time.

Seeing the White Horse by moonlight sounds absolutely wonderful. We love it, though it's some years since we've been there. The kids used to enjoy it, and another fascinating place in the area is Wayland's smithy, the old barrow, which I wouldn't visit at night for any money, for fear of a barrow-wight. Thank you for this post, Kath!

Thanks ever so much for the link to the White Horse Song! Didn't Betjeman write at least one line or verse about the White Horse of Uffington? He lived there for eleven years!

You'd have thought so, wouldn't you? But not so far as I can tell. Anyone know?

I'm afraid I'm no use on that question, but I used to live in Uffington too! A gorgeous village, and the White Horse felt like a personal friend, though a very ancient & mysteriously powerful one...

I love the early Celtic coin images too, Katherine. Am envious of your seeing the Horse by moonlight - I did once spend a night's vigil there but it was grey and misty and rather damp. I sing another folksong called White Horse Hill by the writer Peter Please to my children almost every night. Chalk is a very magical substance, isn't it, underfoot...

Love your blog so much, I've nominated you for the versatile Blogger Award. x

I'm fascinated by the white horses. There's one in Wiltshire, near Eddington, that I used in my book about Alfred, Warrior King. Eddington was where a significant battle took place, but I couldn't resist a magical episode involving the White Horse and my favourite character in the book, Cerys. But how wonderful to see the Uffingon horse in the moonlight! What mystifies me is how they managed to design them, all those years ago - when as you say, you can only really see them from above or at a distance.

Kath, try this for a modern White Horse of Uffington poem in every sense: http://www.journallive.co.uk/culture-newcastle/arts-news/2011/11/05/uffington-white-horse-puts-poetry-in-motion-61634-29722893/
Note that the poet's words
'It doesn’t look much like a horse but it does look like the spirit of a horse' echo perfectly the words of the character in the Terry Pratchett book! Uncanny :)

There's a great exhibition of hill figures on at the Vale and Downland Museum this month June 2013 - for anyone who stumbled across this blogpost as I did when researching the White Horse at Uffington - its a real treat!