I’ve just finished a YA historical (not due out until Spring 2013) which originally
was going to be about a milkmaid, Susannah, fresh from the country, who committed
a minor offence and was sentenced to imprisonment on one of London’s ghastly
hulks (the decommissioned warships which were moored in the Thames). Whilst
researching what life was like aboard a hulk in the early 1800s, however, I
discovered something rather intriguing: that sometimes the hulks were used
as a holding bay for prisoners who were going to be transported.

So maybe, I thought, it would make a better story if Susannah were to miss out on
the hulk experience and be sent to Australia instead.

English gaols at this time were fearfully overcrowded, and to be exiled was a popular
punishment for both major and minor crimes from early seventeenth century until
1868. Until the 1770s criminals were deported to the United States, but following the
American Wars of Independence they began to be sent to Australia. It was seen
as a useful and humane alternative to execution, which would probably have been
the sentence of many if transportation had not been introduced.

A sentence could be for life or for a minimum of seven years, and convicts would
typically be expected to work in the colonies by farming, mining or helping to
build roads. When they had served their sentence – or most of their sentence –
they would be granted certain freedoms: to marry and raise a family, to work and
live where they pleased. In the unlikely event that they could raise the fare, they
could return to England.
I read more. Throughout the eighteenth century, women and their children were
regularly among prisoners deported to Australia, but in 1789 a cargo consisting
of about 230 women and children were sent to Botany Bay aboard a ship called the
Lady Julian. Some of these women were prostitutes, others had been convicted of
quite minor crimes, but their main reason for being transported was to enable them
to marry male prisoners already living in Australia and increase the population.
But first there was the year-long journey, during which they were encouraged to
become - ahem - friendly with the sailors. 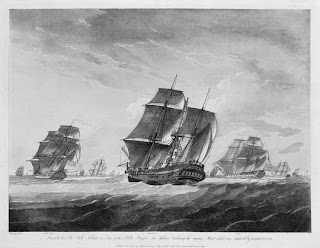 In THE FLOATING BROTHEL, Sian Rees’ fascinating account of the Lady Julian’s voyage, she
tells how each shipmate was encouraged to choose a woman for the voyage. Sets
of baby clothes were part of the provisioning for the ship, for (as The Times
put it) it was hoped that “the salubrity of the sea air may, during the long
voyage, produce babies to every honest woman”. How the women felt about this,
and if they had any choice in the shipmates’ choosing of them, is not recorded.
So my main character misses out on being imprisoned on a hulk, but instead is sentenced
to be transported. Gaol fever was rife and life on board ship was harsh; what happens to
her on the way to Botany Bay? Does she even get there? You’ll have to read the book to find
out! I wish I could give you a title so that you’ll know it when you see it, but this hasn’t yet
been decided on. Suggestions gratefully received!
Posted by Mary Hooper at 01:00

Oooh I really like the story. I don't have any good title ideas but will definitely read it when it's published!

I really enjoyed this piece - a real eye-opener!

Will keep those same eyes peeled for your story when it's published.

This sounds like a really wonderful story, Mary....Can't wait to read it. Tell us when you know the title!

Can't she be in the hulk first and THEN transported? Will be a great book.

Thank you for your comments. Book Maven: yes, that's what I was going to do at first (hulk and then transportation) but it would have meant three different imprisonments (she was first taken to Newgate Gaol)and I thought this might be a bit too much for the poor girl.

This sounds a great idea and I look forward to reading it! It's shocking though to hear that people were STILL being imprisoned in these hulks in the 1800s. In my novel Forged in the Fire, set in 1666, a large group of Quakers are imprisoned in this way, prior to being transported. This was a true story, which I incorporated into my novel. The prisoners were held on the Thames for months, and when they eventually set sail they were captured by the Dutch and taken to Holland - from where they were eventually sent home. By this time more than half of them had died.

Sorry - it was 1665, not 1666. The plague was raging in London and I found it amazing that the authorities were still finding time to persecute Quakers!

Sounds fascinating! I too did some research for my OU course and discovered the Rajah Quilt which I had seen in the quilts exhibition at the V&A. The quilt was made by women prisoners being shipped to Australia, and has connections with Elizabeth Fry. May be worth a look?