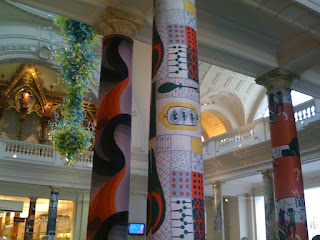 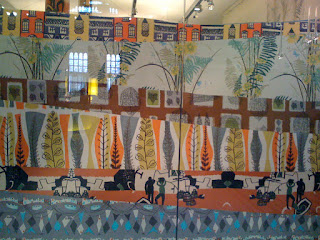 Something extraordinarily vibrant is happening at the V&A right now. The pillars of the main atrium zing out with colour to celebrate: British Design 1948 – 2012. The exhibition traces the 64 years from when London first hosted the Olympic Games after the Second World War, until the present when Britain hosts the games once more – a celebration of design innovation in a modern age.

In 1948 London was a city devastated by bombing and austerity. But the years immediately after the war produced a surge of creative designers and artists responsible for gigantic leaps in innovation and creativity across a wide spectrum which impacted on objects, buildings, fashion and music. Walking through British Design 1948 – 2012, I was struck by the fact that everywhere I looked there were objects integral to what I lived with or saw or experienced as I was growing up. The Exhibition is a celebration of British Design but at the same time seems to be a potted history of my life.

I grew up with austerity – switching off lights, running shallow baths, watching my mother melt down the stubs of her lipstick in a little dish over a candle to remould a new lipstick in one of the empty cases. And then suddenly that marvellous day when my mother and I went into town by train to buy a new ‘look’ for our home. Out went the Art Deco furniture covered in drab green horsehair fabric and the chrome and glass coffee table and in came the new sleek look with fabric that was quite outrageous – geometric yellow and black and pistachio green shapes that were almost replicas of the designs covering the V&A pillars today – and a coffee table that looked like an artist’s palette on three legs!   The madness of the new age of design had seduced even my parents!

Then came the 60’s and the King’s Road was transformed from a long street of unassuming shops to a string of boutiques where Mary Quant and Vivien Westwood encamped. On the southern tip of Africa I knew very little of the physicality of the King’s Road but the energy of those designers and the times came filtering through. I wore the white boots, the mini, the halter neck with cut-away armholes, the first version of tights, the pale lipstick and the dark eyes. And the exhibition sample of Zandra Rhodes’s 1964 ‘Gala’ fabric for Habitat with its zigzags and explosive red firework displays in the graphic style of Pop reflects exactly those times. I might have lived far from the swinging London scene but I quickly converted from the bob to the straight hair and fringe of Jean Shrimpton and the long dresses and flowery patterns of Celia Birtwell and Ossie Clerk. (my stalwart Singer hand-sewing machine knocking up the equivalent in a matter of hours)

Standing impossibly low and small, with wire-thin steering wheel and sticklike gear shift, the first Morris Mini Minor that rolled off the conveyor belt in 1959 is part of the V&A exhibition. By 1963 my future husband was driving a replica in white and memories of the 1969 movie The Italian Job sprung to mind. By the late 60’s I was studying ceramics and British potters like Hans Coper, Lucie Rie, Ruth Duckworth, David Leach and Micheal Cardew, all on view in the Exhibition, were my idols.  Then came the young innovators like Jacqueline Poncelet and Elizabeth Fritsch pushing the boundaries with slip cast bone china and jewel-like applications of coloured slip and I became the possessor of a triple beam balance and my days were obsessed with mixing kaolin to create my own translucent slip-cast porcelain and gruelling hours of piercing minutes holes through paper thin pots only to have them disintegrate in my hands.

I haven’t even touched on the design magazines, book covers, posters or the music and film clips in the Exhibition – Vanessa Redgrave in Blow Up in 1966 - or the fact that David Mellor could design cutlery that’s sublime to hold and at the same time design the traffic light still in use today. Or that the Concorde, that awe-inspiring example of British design, made its debut in 1969 and or that the street sign for children crossing still used today was first designed by Margaret Calvert in 1964.

British designers make good design seem easy, accessible, enjoyable and fun. Emerging from the Exhibition and walking back through the patterned pillars of the V&A I found I was smiling at the brief glimpse into a very vibrant, quirky and energised 60 plus years… not just of British Design but a brief glimpse into the potted history of my own life. The Exhibition is well worth a visit. What appears at first as haphazard and incidental comes together after you leave and you don’t have to be born in 1947 or 1948 to enjoy it!

www.diannehofmeyr.com
Posted by Dianne Hofmeyr at 05:00

Fantastic post! Thank you, Dianne. Mouth-watering description of the exhibition - I am now desperate to see it. And I must take my 8 year-old daughter, who is fascinated by design, clothes, fabric - & ceramics. She'll love it!

This sounds marvellous, Diane. Mind you, I think the museum is an extraordinary exhibit in itself - I went last year and was completely bowled over by the cafe, and I don't mean the food, though that was nice too!

Ooh, I remember those pale lips, and the Mary Quant make-up with the daisy on it - and buying patterns to make Mary Quant dresses. Thanks, Diane - will have to plan a trip, I think!

When we moved into our new house the bedrooms upstairs had the 60s wallpaper (design note from the magic roundabout I think). Shame we couldn't keep it as it had got ruined by damp. I'm not so bold with my interior design choices; are you, Dianne?

In the 14 years I've lived in London I think the V&A has completely invented itself. It smelt of over-boiled milk and the rooms were dank and dark... like an old boarding school. Now its a vibrant magical place full of people and life and you're right Sue the new/old cafe is worth just a walk through for a glimpse of those tiles. And I love the reflecting pool that reflects the red brick building and has children paddling in it on sizzling summer days.
No Eve secretly though I admire pattern and colour, I'm terrified to use it myself... though I have hung red-sprayed branches from th rafters that give me a feeling of coral in my house at the sea. That's about as brave as I get! Not sure I could've made the jump my mother made in the 60's.

Of course I meant the V&A has 're-invented' itself.

You've just sold another two tickets to the show with your infectious enthusiasm. Thank you! I was only dimly aware of the exhibition and now it is promoted to 'must see asap'.
Michelle Lovric, but having to be 'anonymous' as Blogger doesn't want to know me today.

Oops, not sure what went wrong there - but just to say, yes, absolutely intrigued to go along and see this exhibition. I do love the V&A.