Moving along the Timeline by Penny Dolan.


I have just come back from Florence. Although I had an image in my head of that great dome, my pre-trip study barely allowed time to note our hotel was near the Ponte Vecchio. I decided Florence could create its own surprise, and went clutching my Rough Guide’s densely packed pages and a variety of maps, some deocrative, some useful. Wonderful it was - and perhaps because the visit was so dominated by architecture, my History Girl thoughts are about one of the ways we arrange history. 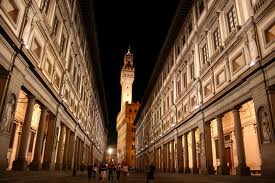 As I left the Uffizi Gallery, slightly stunned by all the acres of art, I felt that at last I had understood something about the development of Italian art history. I could see it as I hadn’t when visiting London's clustered galleries. I decided it was because of the shape of the Uffizi building itself. 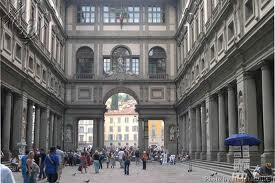 Architecturally, the gallery is set out like, as a friend said, “a tuning fork”. It consists of two long, thin corridors (with small rooms off) that link at a midway point facing the River Arno.
The linear procession of the rooms and paintings had somehow helped me to see the pattern of those Italian centuries, whether the changes came from Constantinople, the Low Countries, Austria or elsewhere, or in the dreadful guise of  personalities like Savanarola, Napoleon, Hitler or Mussolini. All that day I was walking through a timeline and I came out a little wiser.
I have liked timelines ever since seeing one in my own children’s encyclopaedia. They are such a useful way of gathering and displaying historical information even though they need to be approached with caution. They can be annoyingly simplistic, lacking the kind of precise detail one wants and are almost by definition heavily biased. I always peer into my copy of a strongly American timeline book with a suspicious English eye. Just who invented what, where and when, sir?
Timelines are ever popular educational devices. Most primary school classrooms display history timelines, usually just below the ceiling where they can’t be touched or followed with the finger. (Surely that's one of the pleasures of the timeline?)
Then, only last weekend, at the Federation of Children’s Books Annual Conference, I met a man totally devoted to a timeline. Christopher Lloyd was talking about his pictorial timeline book “What on Earth?”with extreme enthusiasm.

A gigantic version of Christopher Lloyd’s timeline was displayed on the South Bank by County Hall about a year ago and a new one will be posted in the same position in a few weeks called, unsurprisingly, The History of Sport.
Making one's own timeline can be a useful task. Writers, especially historical novelists, often put together some form of timeline to ponder about how a story works and/or to check a fictional plot against the pattern of real world events.  In fact, that is what I iam about to do.
Meanwhile, before I leave Florence, I must add that by mid-afternoon at the Uffizi I was starting to wonder just what ailments each Madonnas or Bambino was suffering from, or imagining dialogues along the lines of “Try that again, sonny boy, and you’ll be sorry!” or “Do I have to?” or “Seen one magus, you’ve sent them all.”
The Uffizi  painting that charmed me most was a small, dark painting by Fra Angelico called The Thebiad. It showed a landscape filled with tiny images of the Thirteen Hermits who lived around Thebes. If you squint enough, you can see them all doing wondrous or saintly things, This painting has no logical time-line at all and the events are happening almost higgledy-piggledy at the same time as if Thebes was a vibrant, holy theme park. Here's a small section. 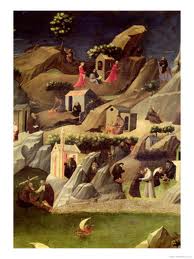 I recall another painting too: the face of a saintly nun, probably by Andrea Della Robbia, inside the new Museo Nationale Alinari Fotografia, which is opposite the Church of St Maria Novelli. We called in there late one afternoon to see an exhibition of photographs by Duffy, one of the Sixties street-kids-with-cameras gang that included David Bailey and Don McLean.
The wall painting was set above an arch, over the intersection between two areas of the gallery display space. As I recall, the nun's calm saintly gaze looked down on black and white portraits of a young Michael Caine, a boldly naked model and Reggie Kray play-boxing with his grandfather in a cramped East End living room. They seemed strange company for such a person, but then this peaceful nun was used to very odd company.
For centuries, the place had been the Dominican hospital of St Paolo, caring for the sick and destitute and following the 1780 Suppression, became a home for poor girls and unmarried women. When World War II arrived, the Fascists emptied out the orphans and turned it into a prison where state suspects were detained.  Despite that lovely peaceful face, I felt a shiver reading that fact.
Meanwhile, back to the big sheets of paper and pencils and my own struggling tome. Just where should I begin my timeline?
Penny’s most recent children’s novel is A BOY CALLED M.O.U.S.E, published by Bloomsbury.
I have just finished reading “Long Lankin” by Lindsey Barraclough, copy and recommendation from HG Catherine Johnson, and “Gillespie and I” by Jane Harris, recommended to me by Adele Geras. Two novels that offer more shivers.
Posted by Penny Dolan at 07:00

Forgot to add that Adele Geras is, of course, a History Girl too! (My mind was on Gillespie.)

That's a wonderful picture book - and I'd never thought of a building as a timeline before, but yes, why not? Walking through the National Gallery will be a different experience for me next time I do it. Thanks Penny!

I adore timelines-and Florence and Fra Angelico. Did you get to San Marco? But somehow have never seen this one. Next time. There's always a next time for Florence!

Thought of you and "I am David" when we were there, Mary. Sadly not enough time for the San Marco this trip.

I often feel a rather selfish gallery viewer, Katherine. The act of wandering among so many images, each one trying to speak out, usually sets me thinking about my own work ideas and maybe not attending to the artists enough.

Very interesting, Penny. I like the look of the Christopher Lloyd timelines but am slightly confused - are they books too?

Love this post!And the timelines and thanks for mentioning me, though I'm not clear why, actually. But I am a great fan of Gillespie and I!

Sue, the Christopher Lloyd books exist in different formats so there's the A3 long wall poster version but also an ordinary and a pocket version but they all have slightly different texts on the back.

There's more "What On Earth" info on the web that might be helpful, including a Vimeo video of CL talking enthusiastically about his timeline but I couldn't get the thing linked up to the blog.

(By the by, Timeline CL is the great nephew of CL of Great Dixter garden fame.)

I think you meant Duffy, Bailey and Don McCullin, not Don McLean. There is a Les McLean but he was later and probably would demand his own timeline.

Mr Bax, I stand corrected. Apologies. It was all the "c's" and "l's" that confused me (along with getting the Italian names right)

However, the memory of the photo where all that gang are posed together was not confused. Thanks.