There goes the neighbourhood – Michelle Lovric 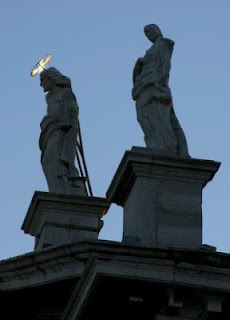 San Samuele is a quiet part of Venice. The only tourists who pass my street door are lost ones. Our one big attraction is the Palazzo Grassi, now devoted to promoting the modern art collection of zillionaire Francois Pinault. We don’t have a single mask shop. Our restaurants are few, the busiest being the dim café where local workmen go for their lunch.

What we do have, however, is a bit of a reputation.

Here’s a popular verse about my part of town:

I don’t know for sure what my antecedent neighbours did to deserve this, but it may be something to do with the fact that I live in Casanova-ville. He was born (in 1725) just around the corner, in what is now the Calle della Commedia: a small plaque marks that fact, though no one knows the exact address. His mother was an actress in the San Samuele Theatre, torn down in the 1860s. His grandmother lived a few hundred yards away. Casanova, who originally planned a church career, preached his first sermon in the church of San Samuele. There were love letters in the offertory tray afterwards. By the time his second sermon came around, success had gone to the young Casanova’s head. Arriving at the pulpit after an orgy of food, he lost his thread and was obliged to pretend a faint to save face. He lost his virginity to a pair of sisters in the Salizzada San Samuele. His first patron was a noble Malipiero, of the eponymous palace on Campo San Samuele. Casanova was forced to jump out of a window after being caught in flagrante with Malipiero’s young protégée. Clearly not destined for the clergy, he was soon playing the violin in the San Samuele theatre, where his mother had trod the boards.

In his memoirs, Casanova would write of his contemporary, a certain Sebastiano Mocenigo, of San Samuele, condemned for homosexual practices.

Two libertines do not a brothel parish make. However, the next famous denizen of the Mocenigo palace was George Gordon, Lord Byron. Where Byron excelled was not so much in poetry as in self-publicity, and his carefully nurtured myth included a great deal of sexual boasting, particularly of his exploits during his Venetian sojourn, 1816–18. Personally, I’ve never understood how Byron came to epitomize the tender ‘Romantic poet’ in the public’s mind when his only true love affair was with himself. With everyone else, he was anything but romantic. In evidence, I offer a sample of his correspondence, the first being a letter to James Wedderburn Webster, dated September 8th, 1818:

‘In the two years I have been at Venice I have spent about five thousand pounds, and I need not have spent a third of this, had it not been that I have a passion for women … the sum of five thousand pounds sterling is no great deal, particularly when I tell you that more than half was laid out in the Sex;— to be sure I have had plenty for the money, that’s certain.’

And four months later, he was boasting again:
‘ … since last year I have run the Gauntlet; – is it the Tarruscelli – the Da Mosti – the Spineda – the Lotti – the Rizzato – the Eleanora – the Carlotta – the Giulietta – the Alvisi – the Zambieri – the Eleanora da Bezzi – the Theresina of Mazzurati – the Glettenheimer – & her Sister – the Luigia & her mother – the Fornaretta – the Santa – the Caligari – the Portiera Vedova – the Bolognese figurante – the Tentora and her sister – cum multis aliis? – some of them are Countesses – & some of them Cobblers wives – some noble – some middling – some low – & all whores – which does the damned old “Ladro – & porco fottuto” mean? – I have had them all & thrice as many to boot since 1817...’

In between the women, Byron did manage some verses – Beppo, the first part of Don Juan and a part of the tragedy Marin Faliero. He also wrote quite a lot of letters talking about his poetry, and his women, including this one, dated January 19th, 1819, in which he tells his friend John Cam Hobhouse not to pay his long-suffering debtors with his publishing earnings:

‘Whatever brain-money you get on my account from Murray, pray remit me. I will never consent to pay away what I earn. That is mine, and what I get by my brains I shall spend on my b***cks ...’

In the same complex of Mocenigo palaces, the Countess of Arundel was two centuries earlier involved in an intrigue with a Venetian noble. It cost Antonio Foscari his life. He was executed on April 21st, 1621, on a charge of mingling with foreigners. The Countess was furious, and told the Doge so. On January 16th, 1623, the Venetian state belatedly issued an apology.

There too lived the scandalous Lady Mary Wortley Montagu, and later her son, who was reputed to wear an iron wig.

Peeling back the years, I find more records of vice in San Samuele. Giuseppe Tassini, the Venetian historian, tells of a certain Orsa Diedo committing adultery with a local clergyman while her husband was away in Corfu in the 1380s. The same clergyman soon after seduced a Lucia Barbarigo. In 1468, Tassini notes, it was necessary to take legal action against the whores who had invaded the streets between San Samuele and Santo Stefano.

And it wasn’t just sex. 'Money makes money and lice make lice' is one of the many pleasurably earthy Venetian proverbs. Moneymaking and bad behaviour seem to have hand in hand in this area. So much so that the city powers also felt obliged erect a handsome marble plaque on the Santo Stefano church wall in 1663. It warns of prison or exile for those who persist in gambling, in etting up illegal stands to sell merchandise and in blasphemy. 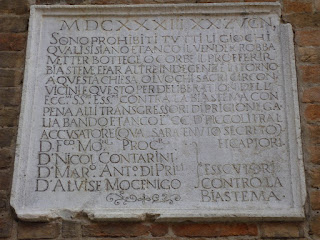 I’m relieved to report that my own home appears pretty much devoid of scandal – so far. (I cannot, regrettably, make the same claims for blasphemy). Our palazzo hosted a couple of eminently respectable Doges, Vitale and Ordelaffo, who enriched the built environment of Venice. William Dean Howells lived here in the 1860s as a newly married man and astoundingly young American consul. He was forced to leave by the depredations of his venal housekeeper.

San Samuele has perhaps definitively shifted from venery to venality. The only scandals are financial these days … a local hotel and our vigile have been implicated in a big bribery case. As for cuckolds, whores, gamblers and blasphemers –I’m now surrounded by respectable large families and a honeycomb of dark warrens on the debatable land of the ground floor, inhabited by Enrico the electrician and various plumbers and other tradesmen.

But a reputation like San Samuele’s dies hard. The gondoliers passing under my study window have only one thing to tell their passengers – that Casanova lived here. Often, they’ll point to my house when they say so. Cue the snapping of cameras and this generation’s resident writer bestowing an unbecoming frown and mumbling, ‘No he did not! We run a nice palazzo here!’

Michelle Lovric’s websiteByron and Casanova feature in her novel Carnevale, as do the Mocenigo palaces.
Posted by michelle lovric at 00:32

Oh, that Mr Byron, what is he like? Thanks for such an earthily informative and really fascinating post, Michelle. It's great to to be able to read such personal commentaries on Venice.

All I can say is: WOWSERS! Terrific post...but did you miss out the angel picture? No matter...still a lovely read.

No, the angel with tarnished halo is at the top of the post! Too hasty!Sorry!

Tell me what Lady MWM was reputed to have done!

Didn't she have something to do with inventing - or trying out - smallpox vaccination? And didn't she insist on staying awake while she had a mastectomy, so she'd be able to write about it? May have made all that up... but she did have an affair with Byron, didn't she? Really, it's a wonder he had time to write any poetry.

Yes, it was Lady Mary who endorsed the smallpox vaccine, but it was Fanny Burney who had the mastectomy. And no, no affair between Lady M and Byron but she did have love-letter affairs with much younger men, and divorced her husband.

But she also wrote the wonderful Turkish Embassy letters describing, among other things, the relative freedom of women in Costantinople harems compared with society ladies in England. She learned about smallpox innoculation while in Turkey. And she dared to satirise Alexander Pope, which got her into trouble. Funny how often clever, outspoken women become associated with scandal!

Harrumph! And it's the blooming Byron name that's remembered.