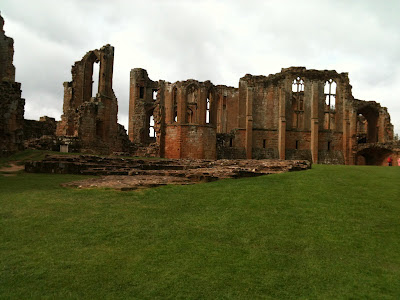 Last week I returned, not to the county of my birth, but to the county of my growing-up: Warwickshire. In terms of castles and stately homes, the county has an embarrassment of riches, including Warwick Castle, Charlecote Park, Ragley Hall, Baddesley Clinton, Coughton Court, Upton House and Kenilworth Castle. This last is a ruin; having been a fortress palace of great importance for many centuries, used by monarchs from Henry II to Henry VII, and famous as the place where Robert Dudley played host to Elizabeth I for an exceptionally long visit (19 days) in 1575, it was then ‘slighted’ by the Parliamentarians during the Civil War – and descended gradually, thereafter, into a fully ruined state.

(‘Slighted’, incidentally, seems to me a rather marvellous term - it retains a whiff of the drawing-room faux pas while in fact meaning here the partial destruction of a building so as to make it useless as a stronghold. Poor Kenilworth Castle had its battlements, parts of its outer bailey and one wall of its great tower destroyed.) 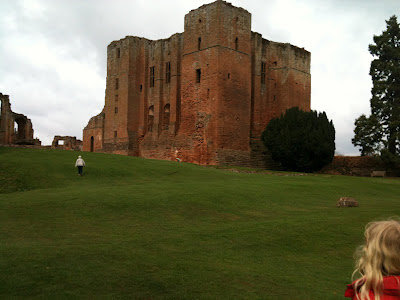 I have visited Kenilworth many times over the years, and have always felt keenly what a shame it is that that castle is a ruin. I have spent my visits reconstructing it in my mind, putting in floors where none now exist… 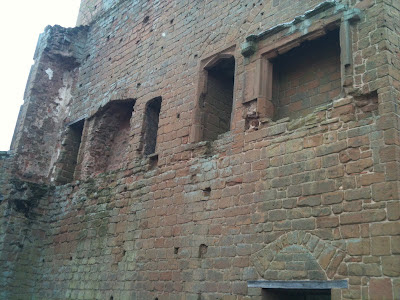 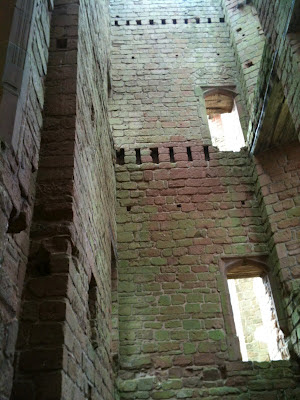 …and viewing the bits of detailed decoration that do remain as grief-inducing indications of just how much we have lost: 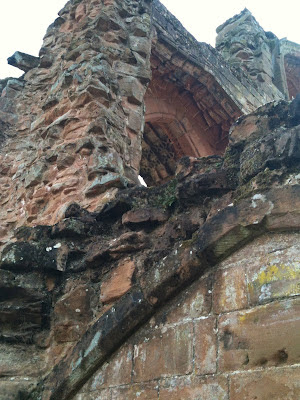 Which, of course, they are. However, on last week’s visit, I decided to adopt a different attitude. I decided simply to look. Not at what Kenilworth would have been, or ought to be, but at what it is. At art exhibitions, I am a great one for conscientiously reading all the labels and somehow not giving myself enough time or mental relaxation to look properly at the pictures. So to look – for once – at the castle, as far as possible without interpretation, was my task.

Thus, this blog is something of a photo journal. And a photo journal without labels. I didn’t want to concern myself with which bit was built by John of Gaunt and which by Robert Dudley. (Though if you are interested in finding out more, there is a very full article on the castle here.)

I noticed, instead, the shapes made on the surface of the stone by centuries of exposure to the elements: 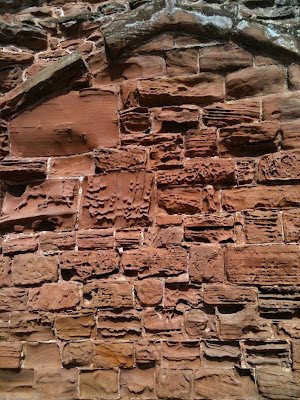 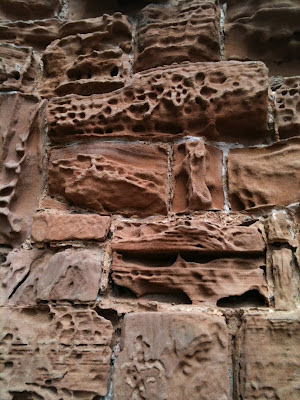 …and how the depredations of the weather have turned a set of worn steps into a water-smoothed cascade: 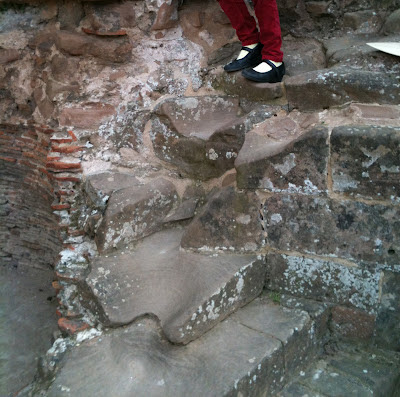 I looked at the rhythm of shapes: 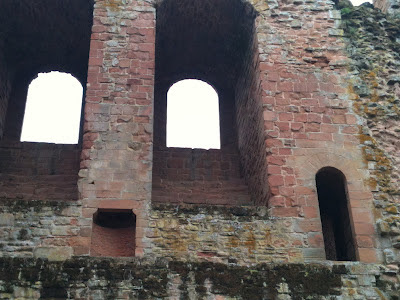 I thought how, in some places, it was as if a hungry monster had simply bitten bits off the building: 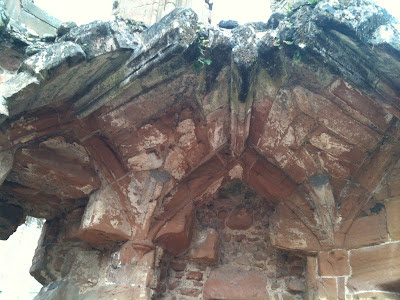 And I marvelled at what a ruin gives you: a view of the secret textures of the building’s fabric – it’s like a cake or a loaf that’s been torn open, so that you can see beneath its crust: 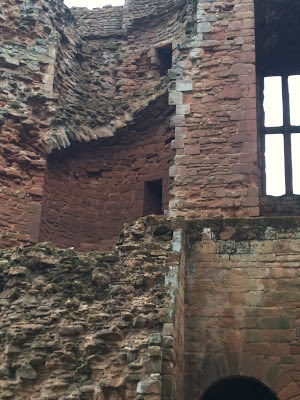 Finally, of course, I looked at the unavoidable graffiti. In doing so I was reminded of Eleanor Updale’s comments in her recent blog here about the different values we place upon things depending on their age. For, while the recent graffiti gave me an outraged shudder, some of the older examples had me peering in fascination: 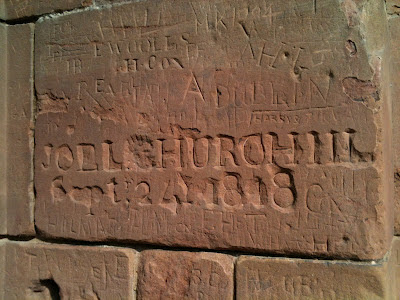 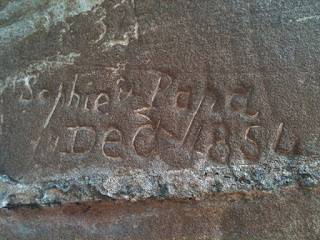 …and had they been still older they would have positively entranced me (show me 16th century graffiti & I swoon!). Even so – and it must be the bibliophile in me – I admit I do always tend for fall for a nice font: 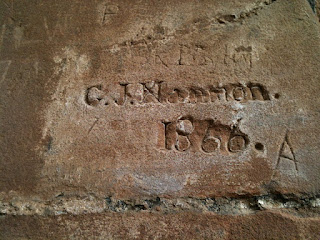 H.M. Castor's novel VIII - a new take on the life of Henry VIII - is published by Templar in the UK (where it is newly available in paperback - whoop!), and by Penguin in Australia.
H.M. Castor's website is here.
Posted by H.M. Castor at 01:00

What a simply stunning post! Those are beautiful photographs, and helped me see the whole thing in a completely different way. It's years since I've been to Kenilworth, and now I really have to go again.

I found the graffiti fascinating too - especially Sophie's from December 1854, which is the exact month I'm writing right now. For a moment I saw Sophie as a real (and probably giggling) girl, rather than simply 'material for the Crimean novel'. For a moment you helped me 'just see'.

There's a sobering moral somewhere in all this. Thank you very much for sharing it.

Thank you, Louise - & how fascinating that you're writing about that very month! I love the 'Sophie & Papa' too. Do you think Sophie herself made the graffiti, or was it 'Papa'...? I love that he calls himself that, if it was him! There's something very touching about it.

Great post Harriet and lovely photos. I've been to Kenilworth a long time ago but now really want to go again. And I want to know more about those graffiti persons. They were certainly determined - it must have taken Joel Churchill quite a time to cut his name!

What a fabulous post, Harriet! Love the photos and the graffiti are amazing. And quite spooky, the coincidence above about Sophie in 1854. Marvellous. Must go there sometime. I love ruins.

What a treat, Harriet. I went to Keniworth many years ago but this was a very fresh look at it. I intend to use that marvellous word 'slighted' whenever I can.

I love 'Papa' too, Harriet! My guess is that he wrote it - with little Sophie standing back giggling with a mittened hand to her mouth. Do you remember how high it was on the wall?

Ooh, good point, Louise! I don't remember... I actually took 49 photos of different bits of graffiti on that visit (!), so it's all a bit of a blur in my memory. But I don't think it was conspicuously low down. I'll have to go back to see if I can find it again!

And thank you, all, for your lovely comments.

Great post, reminds me of trips to the Welsh castles and Nigel Rees.

What strikes me about the carefully carved grafitti is how long it would have taken to do. Somehow much more admirable than the scrawl of a thick felt pen.

Warwickshire is such a lovely county - and you've given me a new excuse to visit. I so enjoyed this post and I absolutely agree with you about ancient graffiti. I love the last image. G. J. Nammon certainly had a way with his chisel!

It seems that Joel Churchill was not a common name in the early 19thC. I only found one that fits with an 1818 visit to Kenilworth. He was a young man of 25 and soon after settled in Edwards County, Illinois, one of the first of a group of English settlers there after the War of 1812 [between Britain and America]. After a brief attempt at farming, he prospered as a merchant and died a respected citizen of Albion in 1872. No certainty that this is the same man but a possibility!

Wow, Mark - quick work! That's fascinating - thanks so much.

Wonderful post, Harriet! I love your photos. I've never been to Kenilworth Castle, but the pictures remind me of Old Hardwick Hall (which is very near me). That too has old graffiti, the remains of the decoration from when it was a grand house and worn steps and doorways… it's a fascinating glimpse into a once-grand past!

I visited Hardwick years ago, Emma, but don't remember the ruin... I must go back! And Penny, yes - the time taken is an interesting point. Clearly no one challenged what they were doing while they were at it!

My grateful thanks to everyone for the fantastic comments.

I've come rather late to this, but fab pics, Hester!

This is the first time all day the HG site has let me post a comment! I went to the ruins of Kenilworth when I was 19 and absolutely loved them!

Harriet, do come and visit Old Minster Lovell Hall ruins near me one day. It was the Lovell that was friends with Richard the Third ("The Cat, the Rat and Lovell our Dog/Rule all England under the Hog").

I would love to, Mary - thank you!

Oh, Minster Lovell is amazing! (I used to live near there too). It features in John Buchan's historical novel "Blanket of the Dark" - my Dad and I seem to be the only people I know who have read it...

Another vote for Minster Lovell! I enjoyed this post so much, Harriet. Such a fascinating take on Kenilworth.