Heard It All Before? Catherine Johnson 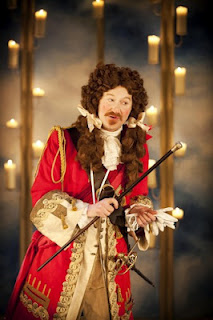 I started this blog thinking about the play I saw last week, The Recruiting Officer, at The Donmar Warehouse, a wonderful restoration comedy that does silly wordplay, crossdressing, big truths and even bigger liars. The performances were brilliant, the actors included six actor musicians who sang and played wonderful 18th century tunes (as well as a very original request to turn your mobile off before the performance).
Then I saw a thread on Facebook concerning historical fiction, about how we are all mired in nostalgia because we are terrified of the present, let alone the future. That the vogue for historical novels and bonnets and bustles on TV is all part of a greater malaise which sees no decent current TV drama (Homeland anyone? OK that's American but it is quality) or theatre (I'll get back to this). That historical fiction is about comfort and safety.

We are all nostalgic. I think it's hard wired. Especially since we have been thrown off the land and forced to scour the world looking for ways to earn a living. It might be because we crave reassurance sometimes but the best historical stories and drama can be just as thought provoking, intelligent and shocking as anything modern.


And we've always made our own myths. The Welsh, like all Celts, are very good at this, think of Iolo Morgannwg and his drug taking, literary mates, dressing up as Druids on top of Primrose Hill in 1792 and resurrecting the Gorsedd of the Bards. Think of the annual Eisteddfod today with it's unreconstructed flower girls dancing barefoot in front of the golden Arch Druid, (no boys! why no boys?) and the (Welsh) great and the good done up in green, blue and white sheets as druids.

But I do think there is more point to historical novels, plays, and dramas than comfy cosy safeness, at least when they are done well. The best novels - Hilary Mantel's Wolf Hall for me - plunge the reader into strange, vivid worlds you can practically smell, but the politicking and the personal relationships are very familiar. Just like the best speculative fiction in fact. It's not just the frocks and the scenery, like every story, it's the people. And costume drama on TV doesn't have to be the visual equivalent of Ovaltine. The Devil's Whore on Channel Four a few years ago is a good example, and I cannot wait for Red Tails, the new George Lucas film about the regiment of African American WW2 pilots, to tell me stuff I don't know and (I hope) to surprise and challenge cinema goers. 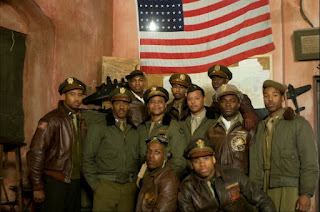 Back to The Recruiting Officer. It was written by George Farquhar in 1706, three hundred years ago, and it talks about the way soldiers are perceived as heroes when needed and louts when not, as well as ultimately, their disposability. Not cosy or safe at all.

One of the tunes used in the play was Over The Hills and Far Away, and this reminded me of another play. A parallel. Set in the present, well in the recent Iraq War, using the same tune, and saying many of the same things about life in and out of the army; The National Theatre of Scotland's production of Black Watch which also had me blubbing like a baby at the end. 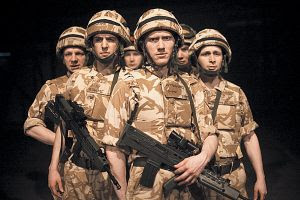 Posted by Catherine Johnson at 19:37

To be human, with all the lies, frailties and madness, does not change so much. Historical fiction can be cosy...the best can also teach hard truths.

Great post, Catherine, and I couldn't agree with you more - some of the cliches about historical fiction/ dramas are infuriating, as many posts on History Girls have pointed out. Yes, some HF is ovaltine-safe and nostalgic, just as most Sci-Fi is fearful and pessimistic. We know about the past and we worry about the future. As you say, at the heart of stories set in the past are the people, and the fact that these historical characters are moving in different social and political landscapes only serves to highlight our own situation and clarify own ideas.

Very interesting post! I've seen it mooted that historical romance/love stories etc are very popular because there's nothing much nowadays to prevent your loving anyone you like! Not sure that's true but it's something to think about. Not so much at stake nowadays if you defy your parents, religion etc. No ostracism if you have a child without being married etc.

Excellent post, Catherine. I certainly agree that Historical Fiction is not all about escapism, nostalgia bonnets and bustles. It can also present uncomfortable truths about the past and therefore the present. One of its functions is to rip away comfortable assumptions about the past, whether about class, race, or conflict. I also saw Black Watch - a tremendous piece of theatre and agree that the reality for serving soldiers in terms of the reasons for them joining up, their experience on the battlefield and the ambivalence with which the civilian population treats them has changed little form the Recruiting Sergeant, through Kipling's Tommy Atkins to the present.

Celia have you seen the National Theatre of Scotland have been devising another piece about the press? Deborah orr talks about it in todays Guardian, I shall definitely look for tickets!
And btw thought you addressed the same issue re soldiers in This Is Not Forgiveness. A great read.

An interesting post, Catherine. And I agree, The Devil's Whore was brilliant - but I was beginning to think I was the only person who remembered it.

I think historical fiction and fantasy can both provide an alternate world through which to explore themes and situations which are relevant to the modern reader. Sometimes in contemporary fiction, because I know the world described I find myself sidetracked with thinking about how realistic / unrealistic something is. Also it can be safer for a writer to explore contemporary issues in this way (even unconsciously). Maybe historical romance isn't looking too hard at politics but it does explore gender etc - the changing nature of the romantic hero a clear indicator of that. It has always been thus Aeschylus' Oresteia used characters/myths/ancIent history to explore contemporary political ideas.

Fascinating post. It's easy to be nostalgic but, for most, life was hard and short.In my own novels I like to write about some of the grittier aspects of living in the past, which prevents a love story from being too 'sweet'.

I've blogged a lot about this myself. There's the quotation by Peter Ackroyd it may be that "Without history, democracy is dumb." Without history, we have no sense of our own identity or the journey of civilisation and we're lost souls. Or maybe primordial slugs.

And I sense too that part of the great hunger for historical fiction is that our schools and politicians have so signally failed to support the teaching of history, so signally failed to give us that anchor...and historical fiction, at its best, teaches but in an engaging, enthralling, way--it's not just names and dates and battles, it's people. And that really is history. Without the people, it's geography!

Okay, I'm getting carried away. My apologies. But I feel so strongly about this. Loved this blog. Best--MM