An Historical Dictator by Linda Buckley-Archer

My contribution this month belongs to our ongoing series of ‘the-history-teacher-who-inspired-me’ posts. I do have a slight problem in fulfilling the requirement of the series in that I did not actually have a history teacher who inspired me. Not at school, at any rate. Any early curiosity I had for the past can be attributed to fiction rather than teachers: Rosemary Sutcliff, Roger Lancelyn Green and Cynthia Harnett. I found a typo in my first draft of this post: “ the history teacher who expired me” – a slip which says it all.

All recollection of GCSE History seems to have evaporated into the ether but I do remember A-Level History classes with some clarity. Every lesson followed precisely the same format: the teacher entered the classroom, perched on the edge of the desk, took out her notes and ... dictated. I was a new girl – my father had got a promotion and the move meant I had to enter the sixth form at the beginning of the spring term. At first I thought that my history teacher would presently get to the end of her notes, and then, perhaps, we could go on to discuss and debate – or at least have a break from the interminable dictation. But no. This was her pedagogic method, and it had more than a whiff of anaesthetic about it. Nothing sank in. English that is spoken slowly enough to be taken down in longhand, with added punctuation, quickly transforms into abstract sounds, the verbal equivalent of those lava lamps so fashionable at the time. King James, comma, anxious to placate Parliament, comma, turned, comma, inevitably, comma, to Robert C–E-C-I-L for advice, and make sure you’ve spelt advice with a ‘c’. As the school bell rang, the dictation would stop, and I would wake up, not quite sure where I’d been. The technique deadened my intellectual curiosity; it attacked the fierce belief in education my parents had tried to instil in me.

I was saved, on this, as on countless other occasions in my life, by L-I-T-E-R-A-T-U-R-E. A friend and I had conspired to study law together at university, but the night before I was due to hand in my completed UCAS form, I came out in a cold sweat. Was I condemning myself to a life of dry facts? Would studying law (the horror, the horror) be like history dictation? Why, oh why had I dropped Eng. Lit. for History? In a truly life- changing moment, I crossed out all the law degree courses and replaced them with French Lang. and Lit. And I am so glad that I did. Getting to know aspects of French culture has been one of the great pleasures of my life. What is more, I can trace my predilection for history to those literary texts which made me want to find out about the times that had formed them. So, Racine and Molière gave me a certain notion of the Sun King and Versailles, Camus informed me about the Franco-Algerian conflict, while my concept of 19th-century France is a rather bizarre mishmash shaped by my readings of Baudelaire, Flaubert, Balzac, Maupassant, et al. It would be true to say that, in my youth, literature taught me about history, and I turned to history to get more out of literature. 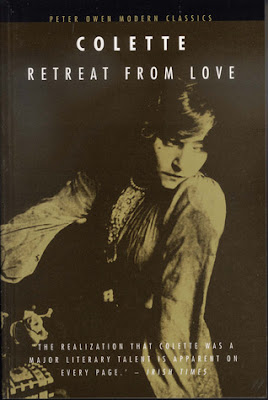 There was one university teacher who, while she didn’t inspire in me a love of history per se, talked about the past in such a way that she made it vital and thrilling. Madame Thysse was a Frenchwoman close to retirement who taught us explication de texte. Once a week, using the rigorous, formal method she drummed into us, we dissected a page of literary French in a positively forensic manner. She had her favourite French stylists and her enthusiasm was infectious.

Sidonie-Gabrielle Colette, who died at the age of eighty-one in 1954, was, as far as Mme Thysse was concerned, the unsurpassed star of French prose, and by the end of the year I think she had persuaded us all. Colette would have belonged to Mme Thysse’s parents’ generation and, a Parisian herself, our teacher would make numerous, anecdotal asides about Paris during the Belle Epoque, during the First World War, and during the Nazi occupation. Fuelled with appropriate passages from Colette, those lessons were filled with images of Parisians dancing around kitchen tables in time to the rhythmic pounding of German guns, or hiding Jewish families in attics, or gleefully gathering up basketfuls of stunned fishes after Nazi bombs had exploded in the Seine.

I suspect I still confuse my teacher’s family anecdotes with Colette’s fiction and historical fact. But the great thing is that half a century of French history has always felt real. And, for that, I owe a debt to Mme Thysse.

Thinking back to History A-Level, I suppose that writing historical fiction has achieved what any amount of dictation never did: I now like and read history for its own sake. Despite still feeling a fraud blogging with ‘proper’ History Girls, at least nowadays, in amongst the pile of books dropped from my sleeping hand at the side of my bed, you are as likely to find Simon Schama as Andrew Miller, Antonia Fraser as Rose Tremain.

I’ll give the last word to the inspiring Colette. I’ve had her advice on my wall so long the ink has almost faded away: When you are capable of ensuring that today’s work is equal to yesterday’s you will have earned your stripes. For I am convinced that talent is nothing other than the possibility of resembling oneself from one day to the next whatever else might befall you.

The Time Quake Trilogy is published by Simon & Schuster (UK and US)
Posted by Linda B-A at 07:59

What a lovely post! A lot of this chimes in with my experience, esp. the French literature which leads to an interest in history. And Colette...I think of her in her room, passing finished pages under the door to her husband, who was appropriately called Willy I think! Sometimes I wish I had such a person to say: stay there till you've done the right number of words and then I'll let you out!

Thank you, Adele. I agree with you about being imprisoned in your room until you've written your daily three pages or whatever. And I think those early days with Willy did teach her to be disciplined if nothing else... I always loved the passage in I Capture the Castle when writer's block is cured by leading him to the tower and removing the ladder.

I used to love Colette when I was a teenager. Must read again and see if the magic is still there for me.

I find Colette a bit annoying, but I did enjoy this post. What a dire history teacher, though! Unbelievable, especially since you're a good deal younger than me, Linda. I think what you very effectively show is that education is not always what one acquires in school, and the value of the 'liberal' education, nowadays, alas, so often ditched in favour of 'training.' As if THAT was what University should be about..

OMG, Linda! Did we have the same history teacher?
Ours did exactly the same thing, and dictated our way right through from the Egyptians to the Second World War. She was very organized about it too, with Main Headings ('capitals and double underline, girls'), Sub-Headings ('single underline, girls') and finally a list of a,b, and c points. Our greatest excitement came in the French Revolution when we finally got her as far as z. Just as well for her that nothing else happened in that period.

But a lovely post, Linda - and I'd never seen that inspiring quote from Colette before. Thanks so much for sharing it.

Virtual Victorian - I hope the magic of Colette is still there for you! Enjoy the beautiful sentences even if you can't like the paragraphs. Louise - I think we must have had twin history teachers. But we survived - and look what we've end up doing! There has to be a moral in there somewhere... Leslie, I absolutely agree that one's education is not solely acquired in school - I have ended up a perpetual student and very happy I've been, too. Many thanks for comments one and all.

Linda - you and I DID have the same history teacher. She killed history for me, very temporarily (though I have never been able to quite overcome a resistance to the actual periods we covered during those mind-numbing lessons). I do read a lot of history now - mainly 20th century but with occasional Tudor and other excursions.

Cath - oh my goodness, isn't the internet wonderful! How lovely that you came across my post. Well, I'm glad you've gone back to history now - and you've reminded me why I have such a problem with 17th-century English history...Thanks for commenting!